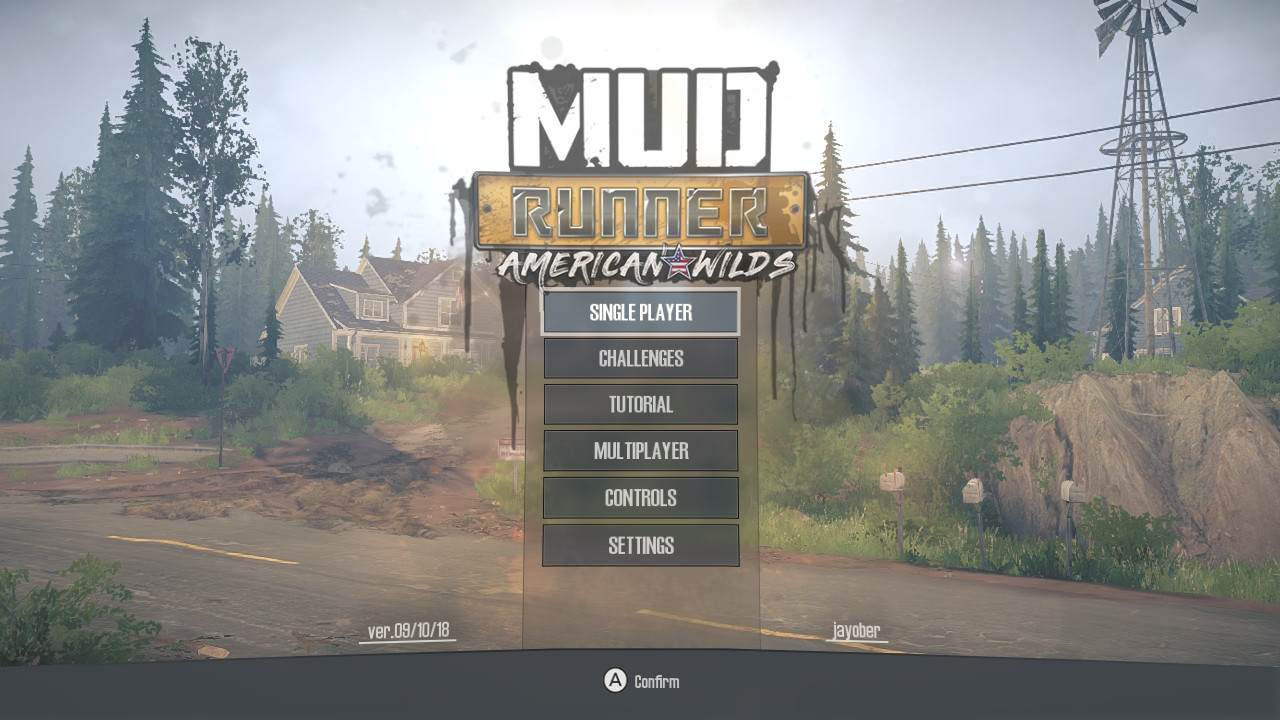 Spintires: MudRunner – American Wilds (shorted to MudRunner from here on out) is an open world, primarily all-terrain vehicle driving game which simulates real-world driving physics and driving through harsh environments all while needing to deliver lumber to mills across the map.

The game includes dozens of vehicles, single-player challenges, single and multiplayer open world maps and a variety of vehicle add-ons and attachments as you drive over muddy hillsides, through bogs and rivers and more.

MudRunner doesn’t really have a story per se, but each challenge map and multiplayer arena does carry with it several objectives which help to unlock other vehicles and maps. These objectives include finding various vehicles hidden within the map, unlocking watch towers which lift the ‘fog’ over the map and reveal roads and hazards, as well as, the main objective of delivering lumber to various mills.

Your method of which you unlock these various portions of the map as well as in what order can determine the amount of time it will take you to work through delivering to the various mills. When I worked through the single-player portion of the game I often found myself juggling between the smaller trucks to capture watchtowers and reveal the map to maneuvering my trucks around to repair and refill my log shipping trucks.

As you unlock more and more vehicles you unlock the ability to try out larger more capable trucks, but sometimes with the downside of only starting off with one or two trucks in your initial fleet.

Each map in MudRunner is dotted with winding paths, paved roads, thick forest, deep bogs and rivers keeping you from quickly completing your tasks. On average I found that unlocking each area of the map, getting the necessary lumber delivery and garage points required around two-three hours of playtime when I was alone and around one and a half to two hours with a friend or two.

One main draw to me with MudRunner was the inclusion of the multiplayer game. Completing the tasks with each map can be overwhelming at times with one person, but if you get a buddy or two or three, you begin to see how working in tandem or together to move lumber across the mountains and valleys is more fun.

It may be difficult for some people to find a friend or two interested in a game like MudRunner, but if you do manage to find a driving crew and you’re willing to work through each map together, you will have a lot more fun together meeting each level requirement.

The Switch version of MudRunner is the definitive full edition of the game, previously released on other consoles and Steam. The ‘American Wilds’ expansion includes extra vehicles and challenge maps which add a few extra hours to your overall play through.

Each challenge or open world level drops you into one of the 30 plus all-terrain vehicles. These trucks come in various sizes, with different uses and by utilizing a combination of trucks you will soon be on your way to lumber delivery excellence.

The maps are broad landscapes of mountainous regions modelled after places in the world where logging jobs are done by crews of large trucks moving timber from logging stations and outposts dotted around the map to delivery points called lumber mills. Sometimes these mills will be placed in hard to reach spots near rivers or roadways which will require you to use some problem-solving skills and map and vehicle awareness to traverse the varied roadways.

While you drive your truck hauling lumber you will have access to combinations of All Wheel Drive, Differential Lock, Automatic or Manual shifting, winching, utility repair, refuelling, log carriages, cranes and more. By working with each of these tools you can work through the map at your pace or alongside a friend to complement their tasks.

For instance, you may find yourself with beat-up truck that took way too much damage. By driving a repair vehicle close to it you can fix the truck in question and begin to use it again. By using the winch which each truck is equipped with you can attach yourself to a tree to pull yourself out ditch or high-standing water, or pull a friend to safety helping them upright their logging vehicle.

Along the way to you will want to deliver various equipment to garages around the map to allow you closer spawn points if you need to rescue a truck. You can also use garages to change out any equipment you have on your trucks like a larger logging carriage or add-ons like repair tires or fuel tanks. The variety of game objectives ensures that you will never complete a map the same way twice as you may find alternate routes or better trucks to use on each subsequent playthrough.

There isn’t any music in MudRunner, aside from the guitar riffs you will hear when you unlock in-game achievements or while you enter a lumber mill. The game does however, have a unique amount of audio cues in the form of sloshing mud, engine turning over or stalling, logs dropping into or out of your truck carriage and more. Occasionally you may find yourself honking your trucks horn at a passing friend.

I had the opportunity to play both the Xbox One and Switch versions of MudRunner. While the Xbox has a bit of a performance boost, which is understandable considering the systems power, the Switch version in docked mode was comparable in performance and visuals minus maybe some longer draw distances and visual fidelity on the mud or environment on the Xbox version. The physics of the mud and weightiness of the vehicles seemed to match perfectly.

If there is one glaring difference it’s in the Switch’s lack of analogue gas and braking due to the Switch’s digital trigger buttons. The omission in analogue buttons really keeps the Switch version from being my recommended version of MudRunner. I know it’s not the developer’s fault, but if given a choice, and portability isn’t your main reason for purchasing this game, MudRunner is played better on Xbox compared to the Switch because of that alone.

The other thing that would have made the game a bit easier to navigate through would have been an always on-screen mini-map. The need to constantly go in and out of your map or set waypoint routes, which is cumbersome, got tiring very quickly.

If you like your video games to be about completing real-world tasks and you like big trucks, mud and driving alone or with a crew, Spintires: MudRunner – American Wilds, is a great game. The realism of mud sloshing against your wheels and the feeling of navigating through dense forest is like none other in a driving game. I would say that having a friend or two or three will make time with this game a lot better, as working together just feels right.

There are multiplayer lobbies that you can jump into, but at the time of writing this, I haven’t yet ventured into a map with strangers to see how things played out. Your mileage will definitely vary as completing the included maps would only take about 20 or so hours to work through. After you have 100% each map there isn’t much else to do in the game.