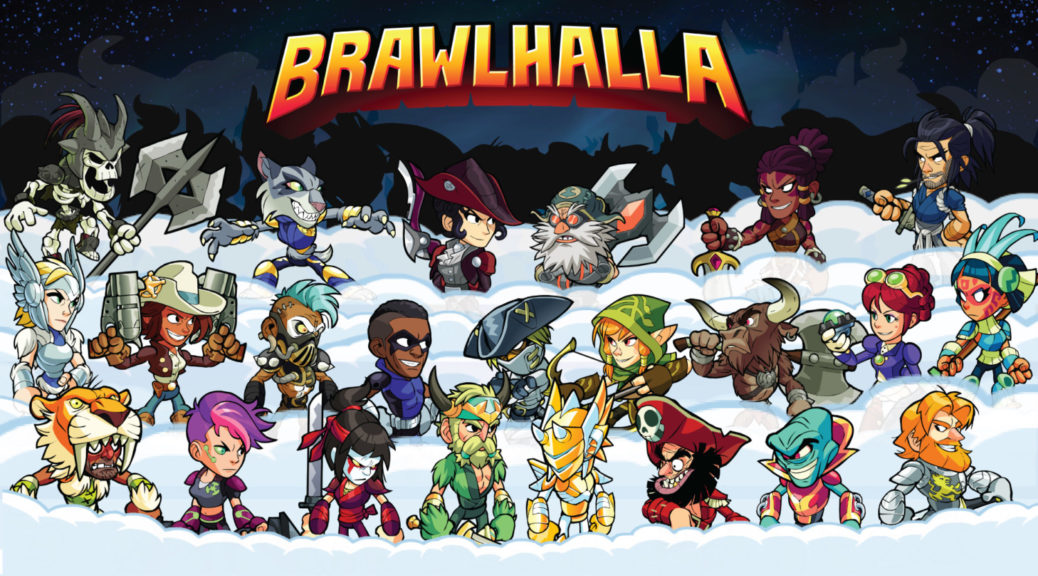 “Brawling in the afterlife.”

Shown at PAX East 2014 and developed by Mammoth Blue Games, long before the company was acquired by Ubisoft on March 5, 2018, Brawlhalla is a free-to-play fighting game, where the fighting never stops, not even in death thanks to an eternal battle arena where the “greatest warriors” in all of history, can come together and duke it out.

Having previously released on the likes of PlayStation 4 last night, as well as Steam, Brawlhalla is set to have to share the competitive brawl action, thanks to a release on the Nintendo Switch and Xbox One this November. Except it’s more than just the game coming as there will also be a general update, which just so happens to add Rayman, new Epic Crossover Skins, Kung Foot is a new game mode and more.

Only, this patch does not solely release on November 6 (launch day,) as those with Early Access of the game on Switch, was able to download it on November 5 (myself included) and begin the long campaign of earning enough coins to purchase Rayman, but more about that shortly.

Being the fighting game that it is, Brawlhalla does not feature a story, as there is no need for one, but for those who intend to pick up the free-to-play title, it does have a range of content for players to divulge in and earn coins.

The importance of earning coins is so that you can use them in the game’s store, so as to purchase new Legends (the game’s playable fighters of which there are more than 40.) The price per Legend can vary greatly, so even though Brawlhalla is described as being “100% free to play with no pay-to-win advantages” that really does only apply to the actual fighting, as paying with real money, really is the only real way to get the fighters you want sooner, rather than later.

One way to pay your way to victory, is by purchasing the “Brawlhalla – All Legends Pack.” At this current moment in time, it is available for $19.99, but by purchasing it, not only will it unlock every single Legend for you, which are currently available in-game, but it will also allow you to get future Legends from the get-go, when they are added.

The other way to get ahead however, is to visit the eShop to purchase Mammoth Coins. With this in-game currency, players can purchase all manner of things, which includes very specific Legends, new Skins for your Legends (like the Shovel Knight ones,) buying chests, new taunts, sidekicks, KO Effects, Avatars and Podiums. (For context, $5.99 buys you 140 Mammoth Coins and $49.99 gets you 1600 Mammoth Coins.)

Of course, this is nothing new since what is a free-to-play game without plenty of in-game purchases, but at least even if you can’t play as every Legend and own them all unless you pay for them, you will be afforded the chance to take it in turns playing as them thanks to a weekly rotation. Once a week, every week, 8 Legends will be made readily available for the players to try their hand at. Originally it was 6 Legends, but this changed earlier this year.

Still, what of the actual gameplay? Well, in terms of controls, which are rather basic in their execution, dodging and dashing can be done with either ZL or ZR, items can be thrown with L and/or R and the likes of the D-pad buttons and left analog stick are used for movement.

The right analog stick is used for taunts, whereas X and A are good for Heavy Attacks, Y is for Quick Attacks and B is for jumping. (The – and + buttons are for showing the names of whom you’re playing against and pausing.)

By holding the likes of X and A, players can do a charged heavy attack and grab items, like bombs and weapons, with the Y button. (Brawlhalla has 11 different types of weapons to offer players and every Legend can wield 2.) Should none of these inputs meet your satisfaction though, you can always swap them around.

If these controls come across as being too simple for you, due to you personally being a veteran of fighting games, they are simple for a reason, so as to be easy-going enough for anyone to pick up and play. (Reported earlier this year, Brawlhalla was said to have 8,646,824 players.)

As for the actual gameplay, Brawlhalla is rather similar to the Super Smash Bros. games. The game’s stages are essentially made up of platforms of varying dimensions, with most games simply requiring players to be the one who obtains the most KO’s/be the last one standing.

Items and weapons that will spawn, which players are welcome to grab and use as they see fit, but there isn’t an overwhelming amount, so you will see a lot of the same item over and over. As for match length, it ultimately depends on how the game is set up as stock and time is a factor. You can also select to have teams and your preferred region with the Custom Game Mode.

Moving on, what of the many modes Brawlhalla has to offer? Well, if you check out the Play option from the main menu screen, you can gain access to casual games of a Free-for-All nature, which is played against other players online.

Then there is Strikeout 1v1, which pits you against another player and you both have a different Legend for every stock. There is also Friendly 2v2 and The Test Lab that comes in the form of Experimental 1v1 (allows you to try out new game features.)

For the players seeking a harder challenge though, you can also check out Ranked for competitive play. With Ranked, players can choose to engage in 1v1 battles against other players, play with a friend in 2v2 or “Join Ranked” by imputing the correct number.

Naturally, by winning these battles players can earn not just EXP for their characters like they can on every mode, but they will even get ports to increase their rank. Subsequently, losing a fight will have a negative effect on your points.

Then there is a weekly “Brawl of the Week,” which comes with specific rules to what particular brawl is going down. For example, to tie in with the addition of Rayman, Kung Foot has been added. With Kung Foot players are divided into two teams on a small 2D football pitch and are tasked with getting the football into your opponent’s goal. The first team to get five goals win and 2-8 players are supported.

If playing online is not to your liking though, you can always settle for some offline gameplay. In the event you strictly prefer your own company, you can engage in Tournaments against CPU Legends. If you’re in need of learning to play, there are in-game tutorials, which earn you coins.

You can also take advantage of Training to “Practice and Study Moves” and, just in case you’re suddenly over playing on your own, you can always engage in some local offline multiplayer against real-life friends with Couch Party.

There are also things like Daily Missions to earn gold, in addition to daily sign-in bonuses and of course Clans, which are a great way to play online with others and train and engage in battles against other players. You can also help level your clan up so that new players can join in on the fun. Only, at the time of posting this review, clan servers are offline. But hey, even if the actual combat and the various modes aren’t enough to whet your appetite, the glorious 2D visuals alone make Brawlhalla worth taking a gander out, thanks to its comic book-like nature.

While Brawlhalla could never live up to the likes of Super Smash Bros. Ultimate, its arrival on the Nintendo Switch couldn’t have come at a better time. As a free-to-play fighting game, it is a game that would-be Smash owners can dive into, to get a small taste of the excellence that awaits you next month.

Although, if push comes to shove, I would in fact, be more likely to recommend Brawlout over Brawlhalla, as the latter, despite being reasonably enjoyable, does feel a little too much like a poor man’s basic Smash game, but if that doesn’t put you off, then good for you! You’ll be making friends with Nix and the gang in no time.