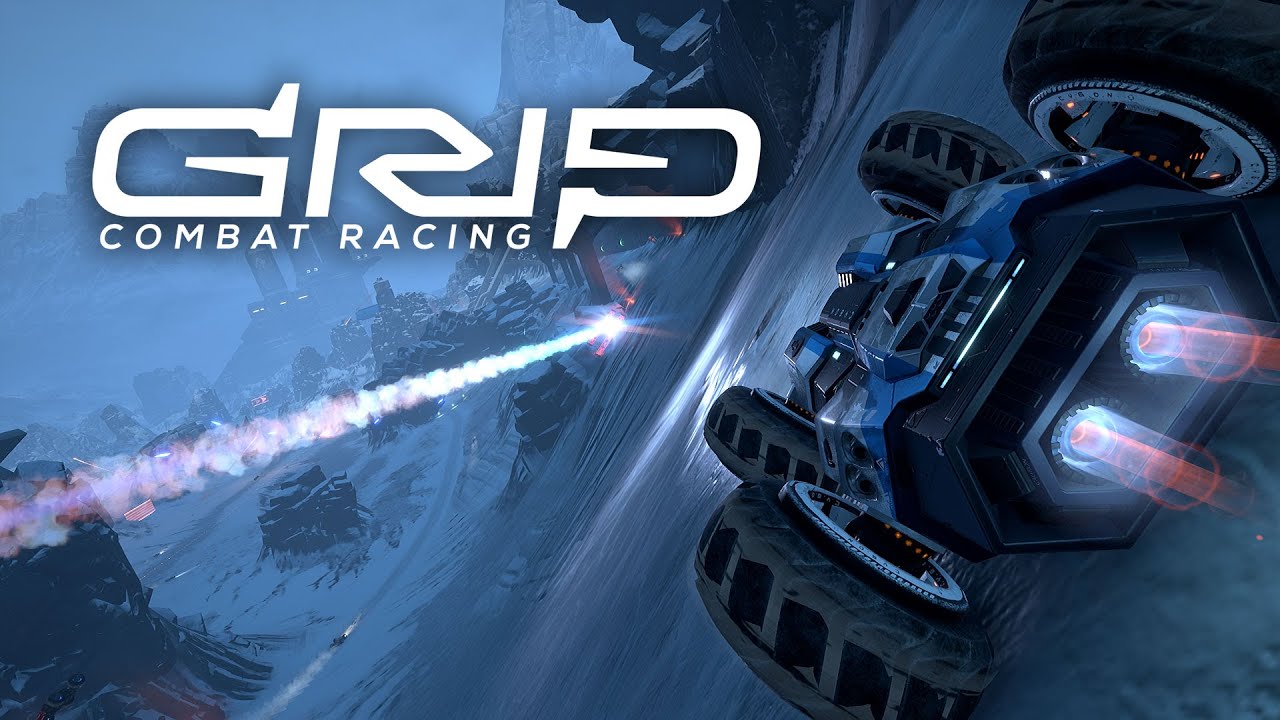 Zip, Flip, and Grip past the competition!

Developer Caged Element and Publisher Wired Productions, have released their futuristic arcade racers across several platforms this November. The game is a unique take on the arcade racer formula with tracks consisting with the ability to scale walls and ride on the ceiling. Along with racing, GRIP introduces combat options in both offensive and defensive varieties that when included with the different course types offer different game types that can be enjoyable, at least for a time.

GRIP doesn’t exactly have a story, though there is a campaign, which pits you against an ever increasing level of difficulty in the form of additional combat options and adding up to nine other opponents. In the main campaign there are several tiers in which you which you move through various match types like races, elimination, and arena battles. Loading screens have a variety of artwork depicting racers and vehicles through illustrations, while they look nice, they don’t really tell any kind of story.

The gameplay in GRIP’s campaign starts off simple with most item pick-ups being of the boosting variety. As you progress through the campaign tiers you unlock more cars, additional tires, decals, and paint jobs. The tiers in the campaign consist of tournaments and a variety of race types. Sometimes your goal is to place highest in the races, other courses have you blasting away at the competition in elimination or arena death matches.

GRIP has a unique variety of tracks ranging from city urban areas, snowy mountain areas, fiery volcanic caverns, and lightning plains. Along each track, you will find sections of tubes and walls where you can drive up. These areas will often invert you and allow you to find alternate routes to your opponents, pick-ups, and maybe gain the upper hand. While each track has plenty of gravity-defying sections, the upside down portions of the tracks often felt underused in my opinion.

Arena matches were some of the most fun, depending on the level you were on, as some tracks felt too open and didn’t allow for easy lock-on capabilities of rockets. Even with ten players the field seemed open as I would often score a third less points than in some of the tighter close combat areas. In the single and multiplayer free play modes. you can set your opponents skills as well as timers for your matches, weapons available and more. The variety in match set up felt adequate for a game of this caliber, though it would have been nice to see more variety in weapon types.

GRIP also has local co-op split-screen for up to four players and can be played in docked or tabletop mode. Tabletop split-screen means everything is tiny and hard to navigate so I wouldn’t recommend that, but on a large TV GRIP plays great and is a great choice as a group racing game.

I only noticed some slight frame rate drops and stuttering on tracks that had atmospheric elements like lightning bolts blazing through the skies, or volcanic fires rising from the ground. There were occasional frame dips as well when an eight-car pile-up would occur.

Another feature GRIP has, albeit a basic one, is a car editor called the garage. Within the garage, you can select your vehicle, change your paint job, add decals, change tires and a few other options. I didn’t find myself caring too much about the design abilities in the game since you mostly view your car from behind, though from time to time I did notice that certain color schemes were easier to see, especially in some of the night time races.

A new free update has since been released after launch for GRIP: Combat Racing. It now allows players to choose between wheeled vehicles and Wheel-free vehicles that use Airblade technology. This helps give the vehicles a more “Wipeout” kind of feel as the cars hover can over the racetracks.

Races are not limited to a single kind of vehicle unless you make it so in the rules. This means players can choose any type of vehicle, Classic or Airblade for mixed races. Much like in Mario Kart games where players can race on Bikes or karts, you can now do the same in GRIP: Combat Racing, thanks to the new free update.

One aspect of GRIP that I could not test during the review phase was the online multiplayer. I could launch a room and set up the rules for my race but I never was able to connect with anyone. I could also set the types of tracks and race types I was interested in playing, but again, because the game is only in the hands of a limited number of people during the review phase, I couldn’t test this feature.

The in-game music for GRIP, is a mixed variety of booming beats and rock style music that accompanies the post-apocalyptic world quite nicely. The game doesn’t have catchy tunes that make me want to find the soundtrack, but they also just fit the mood really well. Not much else needs to be said, other than, it just fits. One area I feel GRIP lacks in is in the game audio.

While you can hear the spinning tires as you speed upwards of 750 mph, the game lacks a lot of other game audio that is pretty typical in racing games. Sure the sounds vehicle engines and collisions are there, but as I played the game I felt like GRIP just lacks any kind of personality.

Still, one of my biggest complaints about GRIP, is in how the cars seem to lack actual weight or grip feeling on the tracks. What I mean by that is, I rarely felt like my car actually touched the ground in the game. I think something is off ever so slightly with the wheel animations and shadows of the cars on the track, along with a lack of feedback in HD Rumble as my car skidded on a turn, rolled through dirt paths, or bounced around on the rocky mountain areas.

While GRIP looks very pretty as a racing game on the Switch, there isn’t a clear indication of story or motivation to keep driving, aside from being crowned 1st or unlocking all the vehicles. I noticed a few graphical hiccups from time to time like clipping through walls, weird resets of my car despite being on the track and clearly leading the race.

Another difficult thing in the game is that navigating some of the tracks can become difficult as there isn’t a clear road ahead of you all the time and some tracks have large open areas or multiple routes. It would have been nice to have some kind of mode or on-screen HUD that gives a clearer direction as to where turns are or track routes for best times.

There are no two ways about it, GRIP is a good racing game. Its sheer amount of content is nothing to bat your eyes at, as unlocking vehicles and upgrades will take you awhile to complete. I did feel that some of the level progression was slow and after several hours of the campaign still had a ways to go in unlocking new cars and parts.

The difficulty in the main campaign spikes quickly as even the lower 3-4 tiers had some races that kept me from winning after several tries. The visual spectacle of the tracks is great as well from lighting effects in bolts of lightning to reflections in water as you blaze past. GRIP is sure to delight racing fans of F-Zero and the old Star Wars Podracing game as well. If you’re a fan of racing games, be sure to pick this up for Switch.