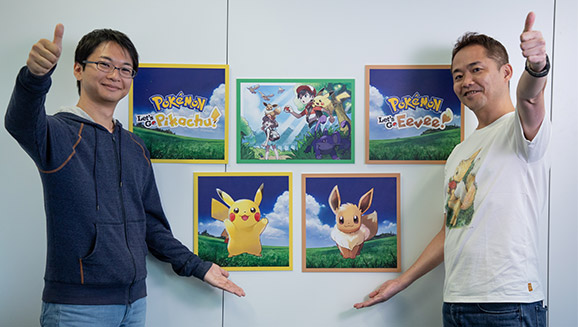 November 2, 2018 1:46 am Published by Mike Scorpio Leave your thoughts

An Interview with Pokémon Creators Junichi Masuda and Kensaku Nabana has been posted on the official Pokémon.com Website. The Interview, titled “Meet The Makers Of Pokémon: Let’s Go, Pikachu! and Pokémon: Let’s Go, Eevee!” has Pokémon.com asking Masuda and Nabana all sorts of questions about the new games. Questions like the focus on bonding with Pokémon, the creative spark of creating new Pokémon adventures, making the world of Pokémon a more livier place.

We have an excerpt of the interview below:

Pokemon.com: There’s a lot of focus on the two main Pokémon in these games—they’re featured on the cover, they boast unique moves, and players have new ways to interact with them. Is this bond between Trainer and first Pokémon something you’ve always wanted to emphasize more?

Masuda: It was something we definitely aimed for in these games—to really increase that ability to form a bond with your partner Pokémon even more than you have been able to in the past. Not only can the Trainer do things to feel they’re getting closer to their Pokémon, but the Pikachu and Eevee partner Pokémon in the games do things to make them feel closer to the Trainer. It’s kind of a back-and-forth relationship.

Pokemon.com: What were some of the challenges in bringing these classic environments into a three-dimensional world for the first time? Which locales do you think look especially good or interesting in this new visual style?

Kensaku Nabana: One of the most difficult aspects of updating all the environments and maps for the new hardware and graphic style was that we wanted to keep it nostalgic for fans of the originals while also making it something that looks very inviting and appealing for younger kids. It should always be very clear where you can go, where you can’t go, where Pokémon would appear, and where they wouldn’t appear.

If you would like to read the full interview, you can find it on the official Pokémon website here.