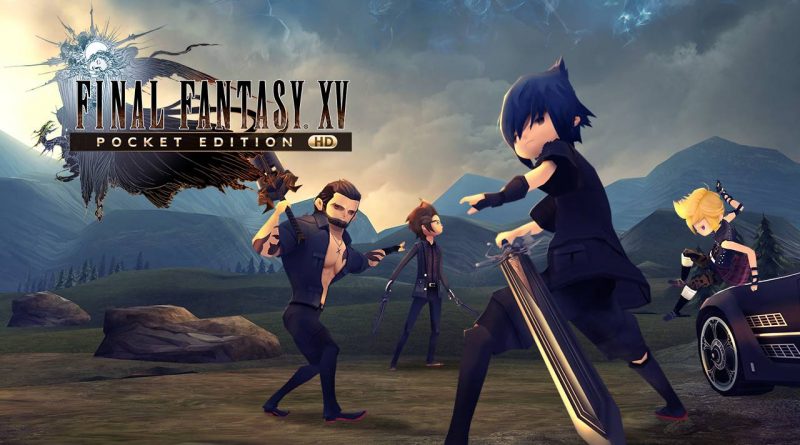 Better than the real deal, or a limited imitation at best? You decide!

At long last it finally happened, a Final Fantasy game has arrived on the Nintendo and plenty more are to soon follow. Only it’s not necessarily the one fans wanted. Instead of getting Final Fantasy XV, a 2016 release title that endured 10 years of scrutinising development and comes packed with high definition cut-scenes, we got its smaller abridged brother that was initially developed for mobile devices.

Don’t get me wrong, it is nice to finally have XV available in some capacity, but imagine an immense open world game, with in-depth combat, plenty of side quests and grotesque monsters. Now picture an abridged version of that game. The mesmerising graphics have been chibi-fied, the combat has become a hell of a lot less simple and the open world has been replaced with walled off areas with minimal exploration.

One major difference that is has however, which can be construed as being a positive, is how much more story driven Final Fantasy XV: Pocket Edition is. Like the main game, it still tells the story of Prince Noctis and his friends and their quest across the world of Eos, in a bid prevent the Empire of Niflheim from taking control of an enchanted crystal that Noctis’ family are sworn to protect.

The story may be slow to start, but make no mistake, it does become more engaging during the later chapters (10 in all) and unlike the original version of the game, due to the removal of the open world aspect and less side quests for you to lose yourself in, the story can progress at a quicker pace more befitting the severity of the situation.

Like I said before, that difference can be construed as a positive, only I like side quests and I’m not the only one. As tempting as it is to stick to the story relentlessly, sometimes I don’t want to rush to the end. Instead, I want to mess around for a couple of hours exploring or doing side quests. It is this aspect that made me enjoy Ys VIII: Lacrimosa of DANA and Xenoblade Chronicles 2: Torna – The Golden Country all the more, before giving in to the final battle and viewing the fateful conclusion.

But hey, there’s no point crying over spilled milk and at least we do have Final Fantasy XV on Switch and although I will be going to go over Final Fantasy XV: Pocket Edition HD’s gameplay shortly, there are a fair few other things to be brought up first.

Firstly, it might delight some players to know that the soundtrack and voice acting from the real deal, have made it over to the Pocket Edition, only because of the Chibi are style at work, there are scenes where facial expressions aren’t as expressive as the could have been and at times, it makes the voice acting seem over the top and occasionally out of place.

There are of course times where the chibi graphics do the mobile version justice here and there, especially when involving the local environment, but I am just not a fan of how some of the characters and big bad monsters are represented. Enemies that are meant to be terrifying are anything but and others that were rather elaborate in their design, ended up looking bland and uninteresting.

It’s a shame it worked out this way, but if you are able to look past the graphical difference, there are then other issues you must decide as to whether you can forgive and forgive. You see, one aspect where Final Fantasy XV: Pocket Edition HD really suffers, is in its performance, especially when played whilst docked.

Although the battles are straight-forward with the B button being used for things like dodging, performing a parry when prompted to and issuing orders to your friends, when they’re ready to do a special attack and Y can be used to spam attacks, it only takes a handful of enemies to be present on screen and battles can become sluggish.

Yeah, it slows things down enough for you to make the most out of each prompt, but one of the things that made the mobile version of Pocket Edition good, was the fact that combat was more streamlined, straightforward and fast, but the framerate issues are a nuisance and you know what else is a nuisance? The camera.

With the cons out of the way, let’s bring it back to gameplay. Being more story driven and no open world to explore, the majority of Final Fantasy XV: Pocket Edition HD, will see players head to a small hub area where a couple of side quests can be completed before undertaking the main quest, which will then take them away from the area you’re and give you somewhere new to explore.

As tempting as it is to move on, given the way Final Fantasy XV: Pocket Edition HD is set up, it is always in your best interests to access the local shop (a vendor selling items as opposed to a browsing in a convenience store,) and complete any and all side quests first, since leaving will prevent you from being able to complete them. In other words, if you leave, although you have the option to carry on in your journey, finish the chapter and then revisit the chapter, you will have to play the whole thing again.

In terms of how to find side quests, since you no longer have to head to a diner to pick them up, you can simply walk over to the point on your map (press + to bring it up) and head for the yellow marker. A lot of the times the quests are of the fetch variety, but there are also treasure hunting quests, which is something added just for the mobile version.

Naturally, side quests aren’t just great for getting new items, but also getting EXP, which is vital for levelling up, only levelling up is done at certain intervals in the game, such as at safe havens, i.e. areas you can set up camp, or where the game prompts it. That said, in all honesty, levelling up isn’t as big a deal as it is in other RPGs as believe it or not, Final Fantasy XV: Pocket Edition HD is actually made a lot less challenging than Final Fantasy XV, which in itself wasn’t too taxing.

Sure, enemies will kill you in battle, but items like Phoenix Downs and Hi-Potions are offered in plentiful amount (provided you take a good look around each of the game’s small areas and dungeons.) You can also just waltz over to a fallen comrade in battle and revive them at the press of a button and they will do the same for you in return.

Furthermore, provided you make a habit of upgrading your weapons by buying new weapons and accessories when able to, which you can even do whilst in dungeons, via the game’s pause menu, pretty much all battles can be easily one just by spamming attacks. On the rare occasions they aren’t so easy, or you just feel like mixing it up, provided you have reached the stage where you can use Royal Arms, pressing A and L at the same time, will trigger the powerful weapon for a limited time and allow you to deal a devastating amount of damage.

It doesn’t compare to the amount of damage you can deliver with Arminger activated (press A, L and R at the same time to activate,) but it’s nice nonetheless and so is pressing A and R. Provided you took the time to approach an element deposit and hold Y to absorb its associated element, you can then use a one-time dose of Elemancy in battle and again, it can be incredibly devastating.

But what if you want to press X in battle? What happens then? Well, doing so will cause Noctis to use up his rechargeable MP to pull off his Warp Strike attacks. Not only will pushing the left stick in the preferred direction, whilst pressing X causes him to teleport/charge into an enemy but at the right time it can inflict a break status and even have him appear in front of enemy snipers, positioned on cliffs, ledges and buildings,

This is by far one of the best things you can do with Noctis, since you can do it more frequently in battle, but there are even times you can use it to get to a high spot and warp strike into enemies and keep going until you run out of time, or kill anyone, thus avoiding an unnecessary battle.

In the event that battles are harder for you than most, that’s quite all right, it just means you might have lapsed on making the most of Ascension. Although it was a bit of a mess in the original game, Ascension is better explained in the mobile version of Final Fantasy XV due to being better explained. It’s also presented in a more comprehendible way so that all supporting characters can be improved equally, as opposed to one falling by the wayside.

Admittedly, there is a nice way to put this, but instead, I’m going to go with blunt honesty. Although not for everyone, Final Fantasy XV can be a pretty great RPG, but when it comes to the Pocket Edition, the whole situation literally feels like Square Enix made Final Fantasy XV and then a Chinese developer come along and made a poor imitation that they then released it on mobile devices. Don’t get me wrong, it has its moments where it’s pretty great, but between it and the 2016 release, the original version is the best.

While the condensed experience is not for everyone, there will be those who will adore it than the cinematic version. Still, with so many other great RPGs already available on Switch and more to follow in the coming months, you might want to ask yourself if getting Final Fantasy XV: Pocket Edition HD is a priority because if it’s not, there are plenty of other fish in the sea.