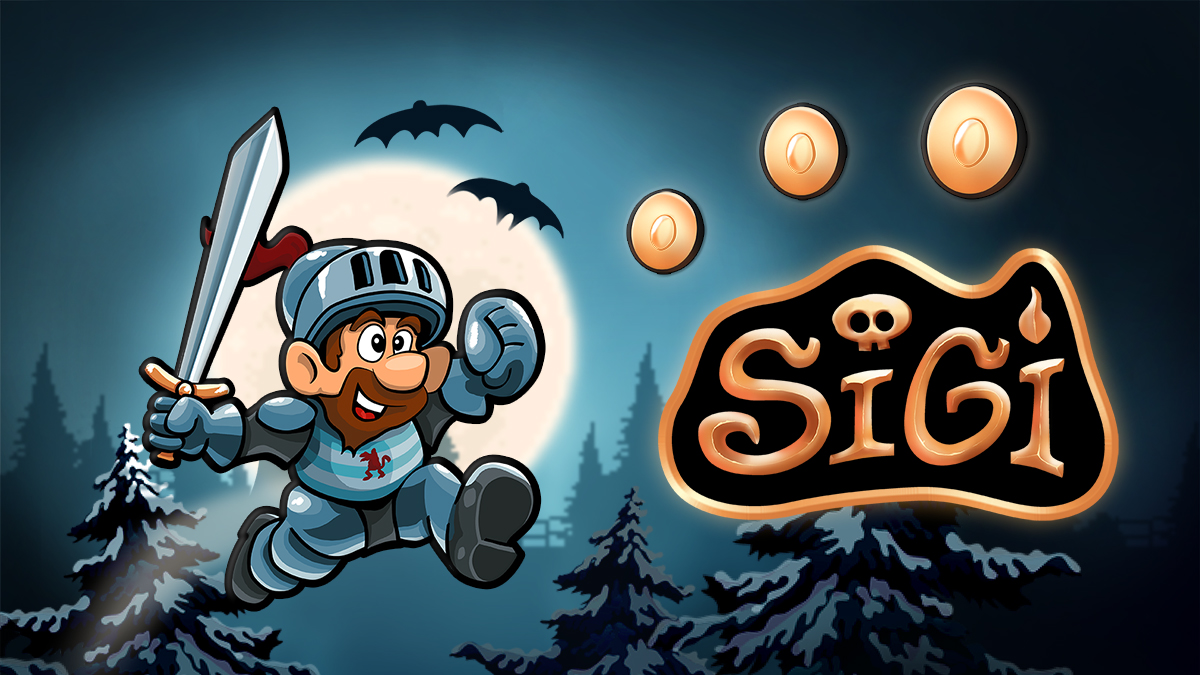 Retro-styled games are a recent fad in video-games at the moment, with games like Crash and Spyro getting reboots and remakes, the retro genre is a style of game that is being heavily invested in by many companies and many games follow suit in their own style of retro game.

Sigi – A Fart for Melusina combines retro side-scrolling styled gameplay with quirky pixel-art graphics and a subtle but humorous story for a very short, cheap, fresh side-scrolling experience that will give you a chuckle or two on the go.

Sigi – A Fart for Melusina follows a very basic story, you take the role of Sigi, a flatulent knight whose goal is to rescue his friend, Melusina, who happens to be a mermaid.

Throughout 20 very short levels, you’ll traverse the lands, beating bad guys and hopping through levels in the vein of vintage Mario and Castlevania games, while following Sigi on his very nonsensical fart-filled adventure. The story is definitely the weakest point of Sigi – A Fart for Melusina, it has no real substance and the only reason the shallow story is there is to have some reasoning behind Sigi’s adventure. It’s not bad, there’s just no actual substance there.

As previously stated, Sigi consists of 20 small levels and after every four, there is a boss fight for you to attempt. The levels in between boss-fights are very, very short, usually lasting from 3-5 minutes each, (even less if you don’t care for collectibles.)

The boss fights can take a couple of attempts and are generally quite easy if you know basic controls and are aware of simple patterns. During your time in the other levels, you can collect coins to stock up on lives and find different weapons to be used.

These weapons give the game quite a wide variety of mechanical combat, as some weapons are more useful in different situations than others, ranging from useful triple-daggers to the utterly useless hammer, which is obviously a take on the very poorly designed weapon in Castlevania that flies in an arch over enemies heads rather than towards them.

The soundtrack and visuals of Sigi – A Fart for Melusina mix really well. The music is a very laid-back, chirpy chiptune which fits well with the retro-yet-modern style of the game. The sound effects are also very retro-inspired and collectibles are very satisfying to pick up because of this.

As for the visuals for Sigi, they are quite nice. The animations are extremely smooth and the backgrounds are really visually pleasing and I did find myself enjoying the settings of most of the levels and the 8-bit graphics were done really well.

Overall, the time I spent with Sigi – A Fart for Melusina was quite pleasant. It isn’t your typical blockbuster like Mario or Castlevania, but finds its own little spot in between. It’s a very short game, about an hour (or two if you like collectables), and while it does have some platforming charm, it’s the length that ultimately kills the game, especially when there are much longer and better examples of 2D retro side-scrolling on the Switch right now. If, however, you only have a few bucks spare and just want a very quick time-waster, the laid-back nature of Sigi will keep you covered.