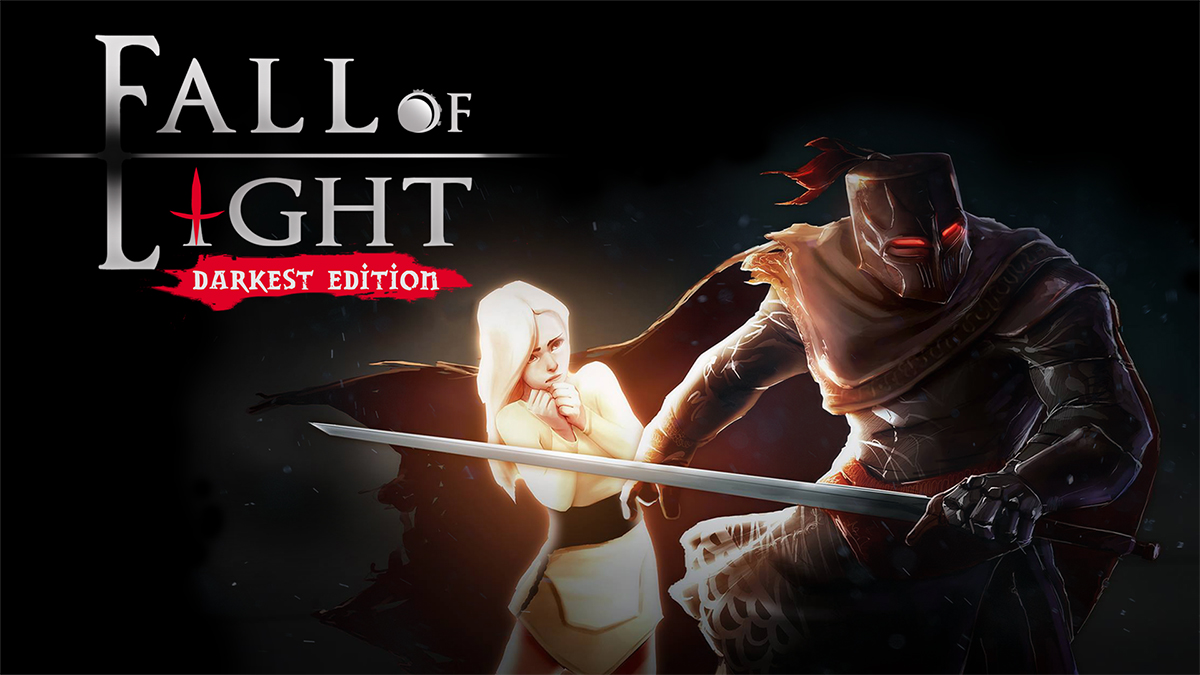 “There are darknesses in life and there are lights, and you are one of the lights, the light of all lights.”

Out of all the ways I could have chosen to begin this review, I went with a passage from Bram Stoker’s Dracula. Why?  Well, asides from it actually being a great quote from one of my favourite novels, but it’s a quote that does a great job of surmising Fall of Light and it’s actually a quote you can expect to see quite a bit when playing Fall of Light.

But, what is Fall of Light aka, Fall of Light: Darkest Edition since that is the name it wears as far as its console release is concerned? Initially released last year and developed by the two-man team that makes up RuneHeads, Fall of Light is a medieval adventure, packed with sword swinging action, with some RPG attributes.

But, for consoles, there’s even more action available since what makes the console release Fall of Light: Darkest Edition is the fact it has all of the original content, as well as a new dungeon, more enemies, more weapons and even traps.

Cited as being a hidden gem, in this story-driven adventure, players assume the role of Nyx, an old warrior who must set out on a perilous journey, with his daughter in toe. But, Aether is no mere child, for she is an Indigo Child and is capable of radiating light in a world of darkness. In their quest to reach the last place on earth that is still graced by sunlight, a serious of ardours tasks and enemies await them and it is only by working together, will they reach their destination.

As for why the world is dark in the first place, well it starts with a pit and by pit I mean a screaming void and twisted souls. Fortunately, there was also a Goddess who helped to shape the world and allowed thirteen eras of peace to occur, in which mankind thrived. But, all things come to an end and the end to peace is all due to a sorcerer called Pain.

By working in secret, Pain amassed great power and waged war against Luce. With the aid of brave men, the side of good tried to hold their own, but in the end, it would be shadow who wins before Luce was struck down and cast asunder into Darkness, where the goddess would forever lie and the era of darkness can begin.

Given my penchant for darkness, while the overall story is not the most imaginative, it did keep me hooked, but I did feel that the game’s graphics did reduce the tone somewhat. It’s great that the devs went for something more modern, as opposed to retro (8-bit,) but while there are some instances where the graphics look decent and the details are pleasing, there are other times Fall of Light just looks a little bland and unsavoury. The soundtrack however, is a reverse of this and is great at setting the darkened tone.

The actual gameplay isn’t too bad either. With a main campaign that can be beaten in just 8 hours with around 18-20 hours to complete everything, not only is Fall of Light content packed, but if you only play it once, you’ll still get your money’s worth out of it. Anyhow, in Fall of Light: Darkest Edition, players must navigate the darkened world, fighting off foes, whilst navigating puzzles.

Sure you can press Y to make Aether stay in one place, to keep her safe from harm, but since she radiates light, if you have yet to procure the lantern, the path around you, will be dark and if you fall off an edge, you will respawn at the last Shrine of Power you consecrated/the beginning area of the actual game.

There is nothing worse than dying, since not only will you respawn without Aether, but you’ll also have to do without her being in close proximity and granting you more strength. You will also make your way back to where you were when you did and bring her back to life, by approaching her ashes.

Also, since she is vital for activating the Shrines of Powers, so keeping her round is beneficial and yes, you can even hold her hand to make sure she sticks with you and runs faster. But if you do leave her, try to do it around a campfire, as she’ll be safe there, otherwise, she can be attacked by shadows and enemies.

Since this is an action game, naturally Nyx can fight back to defend Aether, but not right in the beginning of the game, since he actually needs to find a weapon to even be able to attack in the first place. When he does have something to attack with though, R is for a quick attack and ZR delivers a heavy attack.

Don’t go spamming them though, as Nyx does have a stamina bar and when empty, he can’t attack and he can’t even roll with B, so always plan your attacks accordingly. Especially when you have next to no health and no shield to defend yourself with by pressing L. (ZL can be used to pull out a lantern and put it away.)

As you progress, tougher enemies can be discovered, including bosses and shadow creatures. Just because you’re smaller and weaker weapons are good against them to start with, when you get the chance to upgrade to something stronger, don’t be afraid to do so. After all, long-range weapons like a crossbow are good for distance fighting and with 10 different classes of weapons available, there is bound to be something you’ll be delighted to use.

Now, even though the gameplay can be rather solid at times and it has plenty of fun collectables, including the Amulet of Shadows, which can help you extend your total health and recover life when questing, Fall of Light: Darkest Edition does have some issues.

Normal mode has a tendency to feel unforgiving at times and when multiple enemies are on screen, there were instances where the game experienced some slow-down and skipped for a second or two, before resuming. Thankfully the game never crashed outright as that would have frustrated me because knowing my luck it would happen at one of the worst possible moments, but by the time I walked away, I found myself feeling as if Fall of Light could have done with a little more polishing.

Although Fall of Light: Darkest Edition takes inspiration from Dark Souls and it shows in some places, the fact of the matter is, if you’re fixing for a Dark Souls session, Fall of Light will most likely leave you feeling unsatisfied. However, should you go into it with low exceptions and open to dying a lot so you’re not put off by how hard Normal mode can be, you might just find yourself playing a game you can enjoy for a week or two before moving onto the next one.