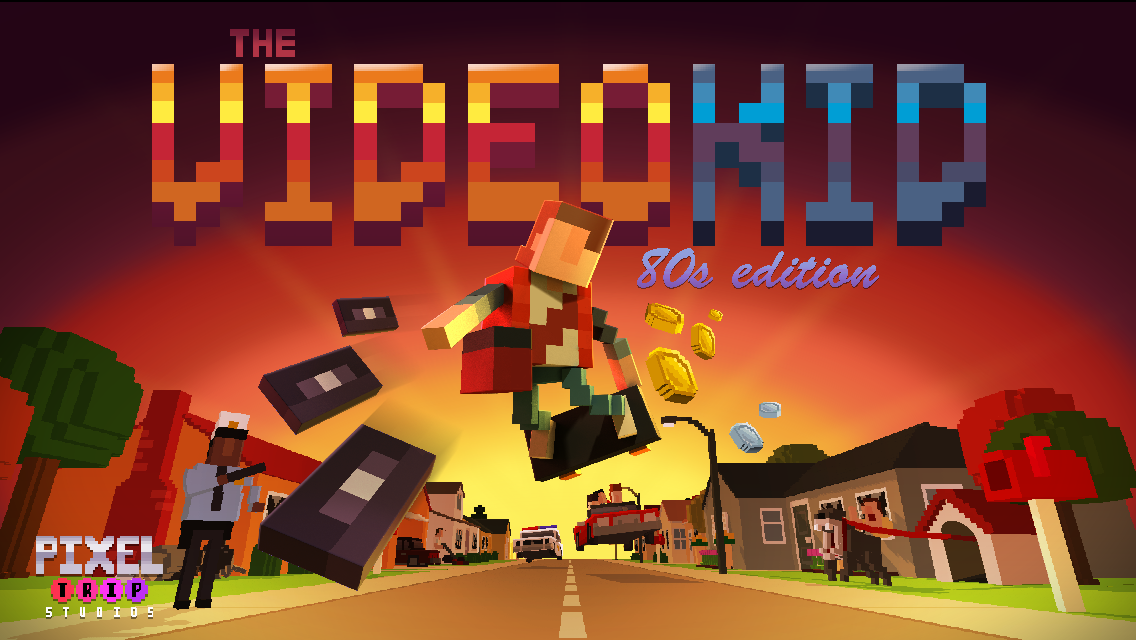 Be kind and rewind!

The VideoKid by Developer Videokid Games LTD skates on to Switch this Summer and that’s about all it does. This Paperboy inspired game is infused with nostalgia and throwback references to my childhood but aside from that, there isn’t all that much else it has to go over.

The game is simple. Skate to the end of the neighborhood while avoiding traffic, pedestrians, and every 80’s TV show, music, or movie reference while also delivering bootleg VHS tapes, performing simple skateboard tricks, and snagging coins. The game plays in an isometric view and is reminiscent of simple point A to B concept games that try to throw a lot at you in an attempt to make things difficult.

The VideoKid suffers from a ‘bullet hell’ approach to game design and obstacles being thrown at you mostly for the sake of having something to avoid. In each run, which seems to be randomly generated your main tasks is to avoid a collision and also make enough money to take your girlfriend, Jennifer, out on a date.

You play as a Marty McFly (Back to the Future) look/sound alike in a skate or die always forward or left/right movement through the neighborhood. You have simple button presses of jumps and tricks, as well as launching VHS tapes towards mailboxes, just like Paperboy back in Atari and early console days.

While the game has its specific source material it draws from, it’s the slow pace at which it rewards you with cash for your completion of tricks and tasks that bogs the game down. I have played over and over the same level in the neighborhood with only slight changes to the obstacles for what seems like an eternity and I haven’t amassed much more than $100.

The in-game cash is used to purchase new rider skins and tricks which come at steep prices. Getting anywhere in the game seems more like a chore than a showcase of my skills. While there are a lot of costumes to unlock I never felt like I needed or wanted them if playing the same thing over and over again was the only way to get them.

The VideoKid does have a variety of 8-Bit audio tracks as you skate through the neighborhood. Some of these seem to harken back to the NES and SNES Paperboy games. You will hear these same audio tracks over and over and over again as you skate through the neighborhood. The first few times it wasn’t that big of a deal but after a dozen or so attempts through the level of grinding the music began to annoy me.

There are more game sounds than the blips and bloop style of 8-Bit audio in the form of characters asking for help or thanking you for delivering VHS tapes to their house. The sounds are generic and the voice is pretty basic stuff but it’s there to change things up as you play over and over again.

It’s really a shame there isn’t a different street layout in this over and over again endless runner, or even some day/night or weather differences just to change things up a bit. The game got super boring really fast and the repetitive nature of the neighborhood and its obstacles didn’t offer much in terms of replayability.

After a few times of skating up the street, you will have seen most of what the game has to offer in terms of nostalgia trips with its NPCs that run or drive up the street. Without variety, the game really lacks that difference maker or appeal. The grind to gain any costumes is also really slow and painful as you realize you will need to play for hours and hours just to unlock skins for your skater that don’t do much aside from swap out pixels.

The VideoKid is a low-quality attempt to make something similar to Paperboy. It’s a real grind to get anywhere in the game and attempting to unlock all the costumes is a boring grindfest. I can’t recommend this game to anyone and it’s a shame since the premise of the game and the nostalgia factor was enough to draw my interest. The interests in this game though will quickly fade as it’s quickly apparent that you will do the same thing over and over again without any major differences to the level and obstacle placement. Nostalgia geeks may enjoy The VideoKid but this 80s kid is didn’t.