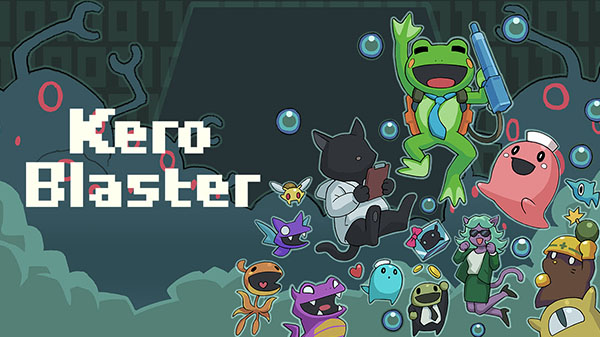 Pixel-based action platformer Kero Blaster originally released on PC and PS4, but has now made its way over to the Nintendo Switch. From developer Studio Pixel, Kero Blaster is Daisuke “Pixel” Amaya’s first major follow-up to the indie gem Cave Story and has much more of a retro flair and style. Now, we’ll just have to see if this frog protagonist has the goods to compete with a bevy of new Nindies being released every week for the Switch.

Kero Blaster has you playing as a frog who works for a teleportation company named Cat & Frog Inc. His job is to travel via teleportation to get rid of these sludge-like monsters that are stopping the teleport devices from working. There are several levels you will have your frog go through and each stage is linear as far as progression is concerned. As you go through the levels you’ll earn coin to buy upgrades and defeat bosses along the way.

While we’ve seen many games that try and replicate a retro style, I feel Kero Blaster did an admirable job of representing what it was trying to accomplish. From the texts, to the characters and enemies themselves, Kero Blaster looks like a title ripped straight from the NES era.

You’re able to look and fire in multiple directions and with the direction, you look at if you hold down the fire button you’ll continue to look that direction while firing. This takes some getting used to because you may want to quickly turn around and continue blasting behind or above you, but you have to let go of the fire button to do so. Once I did get used to this gameplay mechanic, there was no problem to be had and it actually made some of the enemy encounters easier.

You start off your adventure with just a default, pea shooter gun, but you’ll be able to earn three more weapons as you go through the different levels. The new types of weapons range from a gun firing wave-like projectiles, a bubble gun which fires out a marble-like bubbles that will roll around, and finally a flamethrower, which will of course, shoot out a giant flame and help you during an ice-based level. All these weapons can be upgraded via the shop, including also being able to buy upgrades for your health and other helpful items.

Each weapon can be upgraded multiple times and there’s a few other items you’ll be grabbing as well. These items include a jetpack which will allow you to double jump and a certain type of coat that allows your character to take an extra hit. However, if you are hit by an enemy attack you’ll have to find another one if you want to have that extra defensive perk.

Kero Blaster has several levels and it’s not particularly long. When all is said and done, it will probably take an average indie game player 2-3 hours in order to make it through their initial play through. You have three lives at your disposal and you can gain extra lives, but if you run out you’ll have to start the levels over from the very beginning. Some progress you make does save though, so say you defeat a mini-boss in the middle of a level, when making your way through a level again you won’t have to fight the mini-boss a second time.

As for the boss encounters, they’re creative and will put some of your retro gameplay skills to the test. If you end up having no trouble going through the main game though, you do end up unlocking a hard mode after completing the title a first time. It’s significantly tougher and adds a lot of platforming areas that can be quite frustrating. Upon completing it, you’ll unlock the final mode, Omake Mode. This mode functions much like New Game+ where there are more and tougher enemies but you get to keep your upgraded weapons.

While the retro graphics give Kero Blaster a distinct vibe, particular attention needs to be given to the brilliant music. The soundtrack feels like a classic score and each tune has that addictive quality that will get stuck in your head. It is all chiptune and repetitive like the best scores from the NES era. Kero Blaster definitely takes the best aspects of chip tune-based soundtracks and creates a musical composition worthy of praise.

Overall, Kero Blaster is everything you’d want in a retro action platforming title, warts and all. It is surprisingly enjoyable to play with tight controls and clever gameplay mechanics. The retro-styled graphics and soundtrack may not be for everyone, but you’d be hard pressed not to find something to like in this charming title.