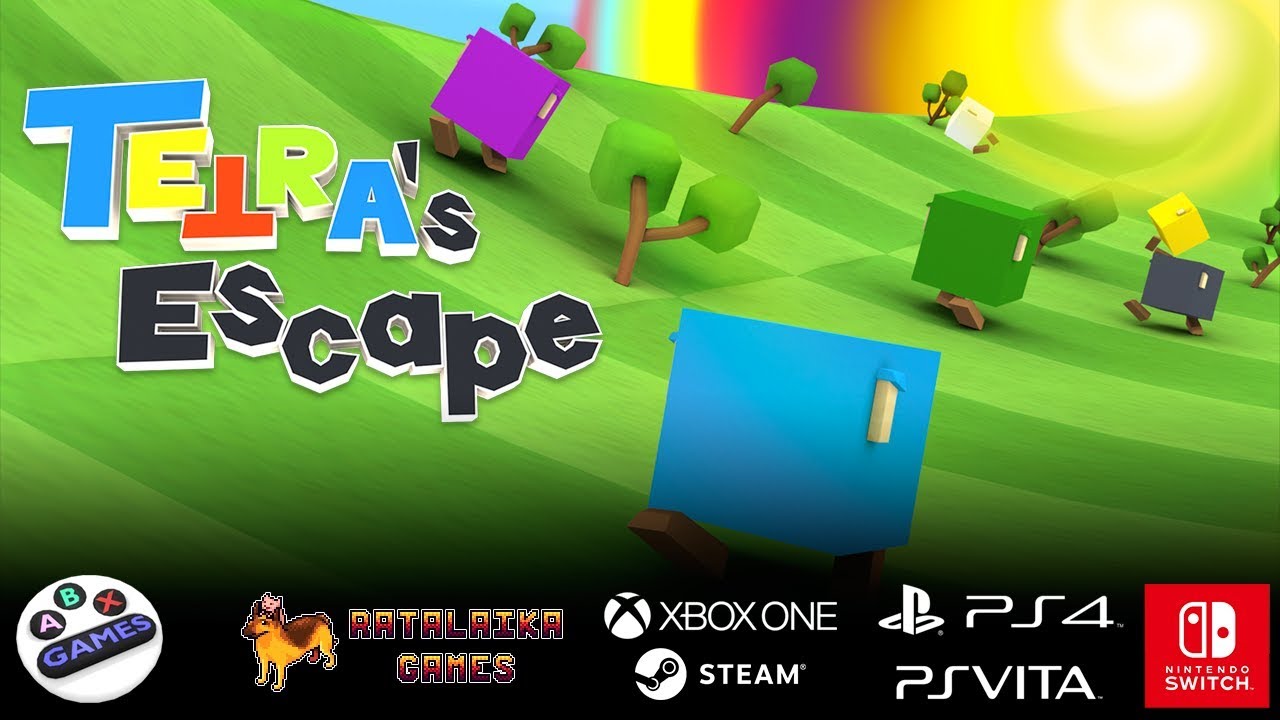 Once upon a time, there was a game called TETRA’s Escape. Developed by ABX Games, TETRA’s Escape is a puzzling platformer that is entirely about block based characters. In fact the heroes of TETRA’s Escape are so block-shaped that they are full-blown tetrominoes and now, after a previous release on Google Play, the time has come for the game, to Switch up and come to Steam, PS4, Xbox One and Nintendo Switch.

You see, although this is a game that can only be played alone, TETRA’s Escape is actually something of a clever little puzzle-platformer game. Although it starts off easy enough, it doesn’t take too long before things start getting a little tricky, as one minute you’re just tasked with controlling a single Tetra, who must make their way to the portal at the other end of the level, it’s not too long until you’re having to control multiple units and unless you utilise them in the right way by having key Tetra’s transform, you will not be reaching the portal any time soon.

As both a gamer and an adult, I will admit I am not a fan of the child-like visuals as they make TETRA’s Escape come across as being a game meant solely for kids, but even with the catchy soundtrack by Levi Bond in the background, I can say older gamers can find something about TETRA’s Escape to enjoy. From in-game achievements to the difficulty spike, to my own surprise, I did find myself enjoy the gameplay, especially the progression of how new mechanics are introduced.

Made up of 8 worlds, with each world having 8 levels (64 levels in total) TETRA’s Escape actually has a decent pace to it. Each world will introduce you to a new mechanic, such as portal’s requiring specific coloured Tetra’s to reach them, to complete a level, to bombs that can undo transformations, ice blocks that make you slide and much more.

But, once a mechanic has been introduced early enough in each world, the levels will then put you through your paces as you must work out how to not just complete the level you’re on, but master the new mechanics you’ve been taught and how to master the levels themselves. You see, in case solving puzzles and getting to the portal isn’t enough of a challenge, each level has 3 Stars on them that players can acquire and when all 3 are collected, a trophy will appear, which you will then have to complete.

Now, you could perfectly place each and every Tetra you have, which depending on where you are in the game, can be flipped and even inverted, but if you can’t get to the trophy and the portal, you will have to replay the entire level and try a new way of placing things. To make things even harder though, although you can leave the trophies behind and replay levels later on, you will need to try and get as many Stars because if you don’t have enough, even if you beat all 8 levels in 1 world, you will not be moving on to the next one any time soon.

As for how to play that is the easy bit. The left analog stick can be used to move the Tetra you’re playing as, with the likes of R, L, ZR and ZL being used to swap between other available Tetras on a given level, provided you have woken them up of course. (To wake them up, you just have to walk over to them.) The A button can be used to make your Tetras hop up a block, (provided they’re not a White Tetra) and Y is what causes Tetra’s in the first place.

To make things a little easier for players, when playing as a specific Tetra, the shapes of their transformations are displayed on the bottom of the screen, in the centre, so when they have more than one, you can see each one clearly and plan our moves around them, with the likes pushing the analog stick left or right, to swap between available transformations.

To confirm the one you want though and place the Tetra where they stand, you will need to press A to confirm but once you have, unless you have bombs, you can not undo it. So, if you can’t plan wisely, be prepared to restart and always remember that pressing X will unlock “Mirror Mode” for any Tetra, with the L, R, ZL and ZR buttons being used to rotate your Tetra’s when you’re planning your transformation.

It’s worth mentioning though that not all of those controls will be made available to you from the get-go as they are part of the new mechanics you will learn and can’t use until you have progressed far enough into the game. So, when playing the early stages, be sure to enjoy all the pit falls because there will come a point where a Tetra that falls more than the height of 3 squares, will be turned into an unmovable block and lava levels can not wait to have you play “Tetra Sacrifice.”

Still, as maddening as it can all be, TETRA’s Escape can definitely be quite a bit of fun and perfect for playing in long or short bursts and it comes with informative explanatory images everything you could need to know, when you need to know it.

If you can look past the basic child-friendly visuals that seem to give TETRA’s Escape an anti-adult feel, what you will find with TETRA’s Escape, is something of a cheap and fun puzzle-platformer that is suitable for all ages and later levels that will certainly require an experienced mind and practiced gamer hand, to swoop in and save the day!