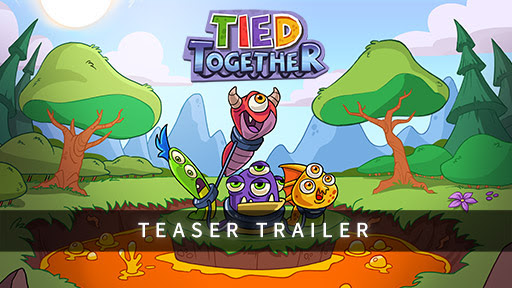 Tied Together Is Tying The Knot With Switch

Looking for a game that will truly test your cooperation skills? A game where you must rely on your friends to solve dastardly puzzles? Playing alone is folly but together, you will conquer all or not talk to each other for a while. Tied Together can make or break friendships and it is coming to Nintendo Switch!

If you would like to know more, you can check out the official press release below along with a teaser trailer.

This game will strengthen yours and your friends’ ties!

Following the recent launch of Runbow, Headup Games tied themselves together with Napalmtree and announce the next crazy party game for Nintendo Switch™: Tied Together! Played cooperatively with up to four players, the game brings hours of screaming and yelling!
https://www.youtube.com/embed/YS1jNh5GeOU

The colorful platformer thrusts players —Tied Together by a tiny chain by the way– into several tricky, cooperative, experimental set-ups which only scientists could possibly come up with. In these environments, your skills of cooperating efficiently will be tested to the max as you overcome various obstacles, balance passages and deadly surfaces like spikes or lava. Not only will your skills be tested here, but also the strength of your friendship…

One fine day a bunch of scientists created four tiny monsters. But for what? To test their cooperation skills of course! So they tied them together into a tiny monstrous chain and let them make their way through colorful, tricky, experimental set-ups which only scientists are able to come up with.

Complaining that the plot is as flat as 2D? Bullseye! You are right. The truth is: YOU are the monsters and WE are the scientists. Get tied to your friends and we will test your creativity and your ability to cooperate with each other! Think your friendship will stand this test too ?…

Single players don’t even stand a chance to handle the monsters’ challenges. Also, it’s a lot more fun to play with friends instead of playing alone, right? As a team you have to coordinate your movements, jumps and cling to the ground and walls in order to complete the levels and stay alive. It’s not as easy as it sounds, but all the funnier! Every time your monstrous cooperative skills are not enough it will end in great chaos – and great laughter.