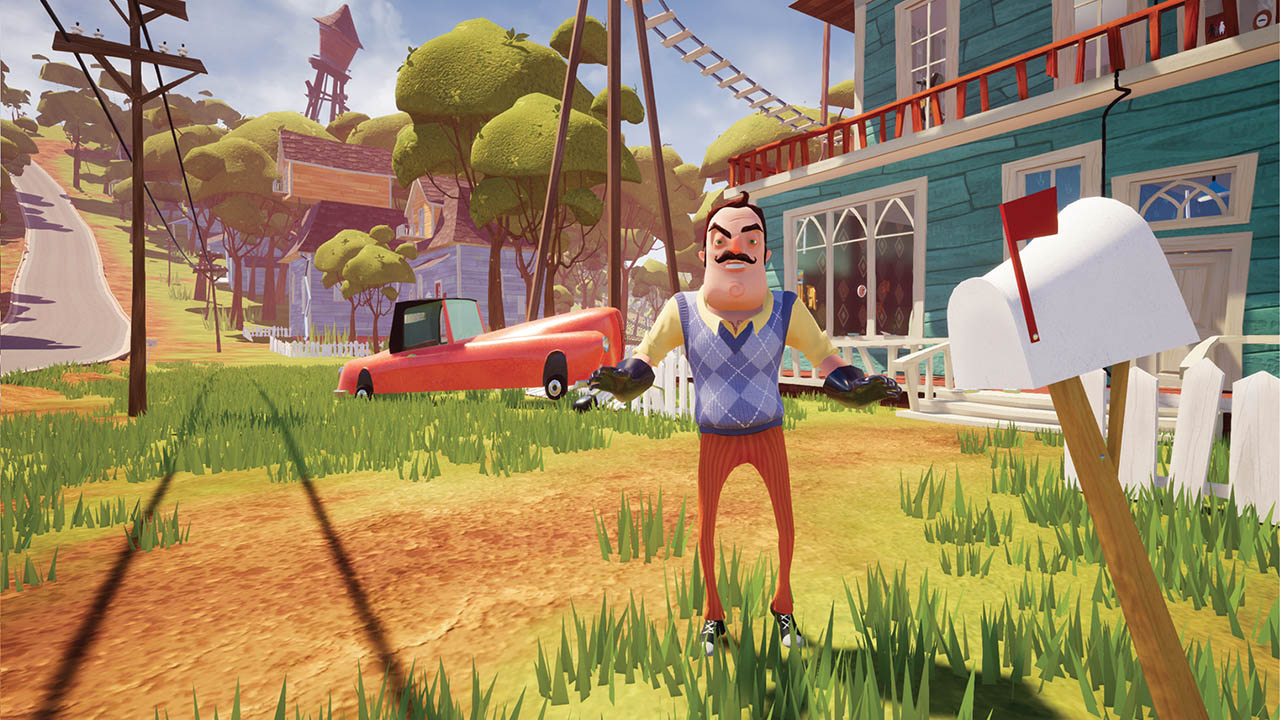 Not a Good Neighbour.

Hello Neighbor is the “long in development” game by Dynamic Pixels that started out in an alpha release on PCs back in 2015 and in a final build on Xbox One in December 2017. The game was received critically on the Xbox and PCs and now this summer it lands on the rest of the major consoles, mobile app stores, and the Nintendo Switch.

Hello Neighbor starts off with you as a kid playing with a ball in the street. As you make your way down the road you come across some creepy missing children papers and a scene of horror as you witness what seems to be a murder or kidnapping. The rest of the game has you playing as the young boy trying to infiltrate the ever-expanding and maze-like house trying to solve the mystery of the screams.

The story is told through three acts where each section of the game gets more and more extravagant as the house soon has multiple stories and additions as well as a ‘Tardis-like’ (bigger on the inside) set of winding staircases, corridors, and a creepy grocery store with robots in the basement. I’m serious, you can’t make this up.

The three-act breakdown really helps to create an illusion that some of the game isn’t entirely in your head, and while it seems that you are in the real world, without spoiling things, it seems like the 3rd Act, especially, may just be a dream…or nightmare. The story that is being told seems to have to do more with fear and loss than it does with solving a mystery, but I will leave that up to you to decide.

The main gameplay elements you will encounter in Hello Neighbor have to do with figuring out a series of elaborate puzzles, most of which have a specific way of solving them, though with some creative freedom sometimes as to which objects may work best.

I found that having a trashcan or cardboard box in my inventory was always helpful as it allowed me to either hold off the neighbor from catching me or created a nice step for those hard to reach objects. The game also shows you enough visually enticing you to find that next item by showing you through a small crack in the wall, a keyhole or cord under a doorway that is blocked to make you have to think spatially about solving the puzzles.

Where Hello Neighbor shines is in its sheer amount of object variety and entry points to the house that makes discovering a new pathway exciting. Sometimes I found myself trying to throw certain objects over and over again to break a window to soon realize that certain objects were able to be thrown further and faster with better results. There were a few head-scratching puzzles that seemed to defy logic altogether. It is in its discord from logic that Hello Neighbor veers into fantasy suspense versus being set in reality.

The music behind Hello Neighbor was never really catchy, but there were certain parts in the soundtrack that helped to make me feel lonely and secluded as well as some jump scares when the neighbor would find you, as you rummaged around a dark room. It was in those heartbeat pulsing moments that I found myself most reckless as I tried to evade the neighbors pursuit which ended up sometimes requiring me to do sections of the game over and over again. The game does also convey that sense of loneliness in the cut screen dream sequences where the story of the neighbor and having just lost his family come through in solemn notes.

Each object you pick up and subsequently throw has its own sound. Though the sounds themselves are appropriate for the objects you will hear the same metal muffled drop of a trash can lid or shattering window glass over and over again throughout the campaign. The crunch of the grass as you ran across the yard also sounded a bit jarring at times since the yards all looked mostly flat and well-watered.

I’m not sure if the developer couldn’t find a suitable running sound for when you were outside. Your footsteps seem very weighty and loud as well as you walk around the house. This made me wonder how the neighbor never heard you in the first place as you scampered across his rooftop.

Part of Hello Neighbor intrigued me to the end. The idea of uncovering a mystery and solving what seemed to be a missing person’s case was suspenseful as I skulked in and out of rooms and shadows. It became clear early on that the neighbor was suffering a huge loss of his family and that there was more to the story than you are initially led to believe. It’s through those nightmare and dream sequences as well as looking over all the objects you will come across that you begin to put together the story of your neighbor and what really happened.

Getting to that part of understanding what was going on though was often the biggest hurdle of Hello Neighbor. I can not tell you how many odd floaty physics bugs I came across in my campaign. There was one time where I set a trash can on the ground only to be skyrocketed into the clouds way above the house. I had to force quit the game and restart the act as the character just kept flying.

There are other graphical glitches that I came across such as objects cutting through fences or walls unable to be picked up. I had seen the neighbors arms and head break through a wall as he looked for me in the room next to the one I was in. I remember a trash can clipping a fence that would ‘dance’ as I moved back and forth.

Hello Neighbor currently has so many bugs in it, it is a wonder it was ever published and released for the Switch. In its current state, it’s hard to recommend Hello Neighbor due to the bugs and framerate inconsistencies. The textured graphics are noticeably lower quality for Switch, as well, considering the quality of games like Breath of the Wild and Wolfenstein that have higher quality graphics working smoothly on the Switch. It’s a shame though as these graphical and performance hiccups may keep people from experiencing an otherwise pleasant game.