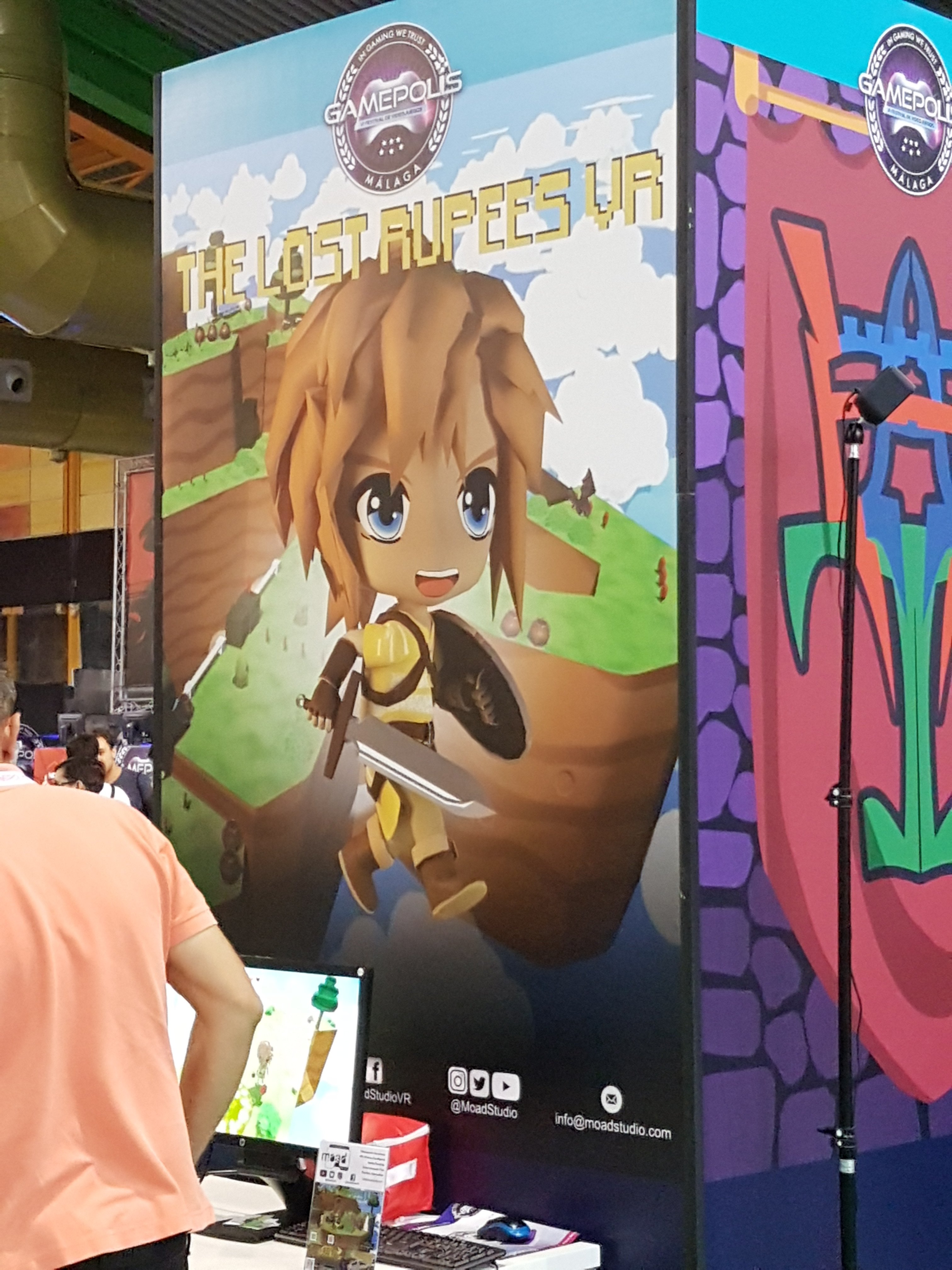 [Feature] A VR Zelda Game? Sign Me Up! It’s time to Talk about The Lost Rupees VR!

The best thing about smaller gaming events like Gamepolis, Barcelona Games World, is the fact that they’re local. Not everyone has the luxury to go to E3 and Gamescom, but there is almost every chance they can attend an event that is only down the road from them. There’s also the fact that these events also tend to have a lot of great indie games to discover.

So, having attended Gamepolis last week, while a number of indie games caught my eye, such as STAY, there is one in particular I want to talk about, The Lost Rupees VR. I was not expecting to encounter a Zelda-like game when I was in the indie zone, but as soon as I saw the poster that had a Chibi looking Breath of the Wild ink on it, I knew immediately I would have to check out The Lost Rupees VR.

It really did not matter to me that the game was not planned for a Nintendo platform, I just wanted to play it badly. So, I stood to one side, talking to Moisés Moreno, one of the MoadStudio developers behind the game, as I watched attendees try out the game. (Fun fact, one of the attendees on the Saturday of Gamepolis, was dressed as Princess Zelda. It was brilliant.)

Although the game itself that was playable was the VR version and allowed players to use a controller to move and act, whilst wearing the VR headset, there was a screen in front of them that allowed players to see what the players could see, but without the full 360° experience. Straight away, the game looked like the love child of Oceanhorn and Breath of the Wild and keeping to the Zelda themes, it features collectable rupees (obviously,) caves, keese-like enemies, a Link looking hero and cuccos. Except they’re not called cuccos for obvious reasons.

Now, not only does it look like an indie Zelda game, it actually plays like one too. But the moment I immersed myself in that world, I fell in love. Not just with The Lost Rupees VR by MoadStudio but the idea of what a VR Zelda could be and my desire for how much I would need one. I’m not saying Nintendo should suddenly make a VR version of Breath of the Wild, but after playing this game, I slipped on my Samsung VR headgear and looked at some of the Breath of the Wild screenshots in full surround and DAMN it all looked so god damn good.

Having played a number of VR games and gone through VR movies that play out certain scenes around you, I can’t help but wonder why we haven’t got a VR walkthrough of the Mushroom Kingdom yet as that would be very dapper indeed. But as much as I am in love with the idea of Zelda VR, I do feel it is fitting to talk more about The Lost Rupees VR as we did do a small interview with MoadStudios regarding the title, but first, it’s time for you to see it in action, so here are a couple of videos:

What is The Lost Rupees VR?

Moisés Moreno: The Lost Rupees VR by MoadStudio, is a 3D game/demo of the adventure platformer genre with an immersive virtual reality mode, from a third person perspective.

With the VR mode, you play as the character in 3rd person perspective and the camera will follow you around as you explore your surroundings, jump over platforms, abate enemies with your sword and breaks the various objects (pots) for hearts and rupees.

It also has caves to explore where treasure can be discovered. The Oculus Rift version, takes full advantage of head tracking and positioning, allowing the player to go on foot and explore elevated areas and be closer to the action.

What is the inspiration behind it?

Moisés Moreno: The Lost Rupees VR takes inspiration from The Legend of Zelda; Link’s Awakening and later titles such as Ocarina of Time and Wind Waker due to their excellent jump to 3D. The initial idea was to do a 3D recreation of the main village (Mabe Village) from Link’s Awakening. Of course, we can’t forget the magnificent Super Mario 64, which has also inspired us and serves as a great reference as to what a 3D platform game should be.

How long has it been in development?

Moisés Moreno: The initial version of the game was released in early 2016 for Cardboard, where you could pick up rupees with a first-person look around our 3D recreated Mabe Village. Months later, we included a cute little hen as the protagonist that you could use a gamepad to move across the stage to collect rupees.

Gradually it was getting better until the village was ruled out in September of last year (2017) because it was not a favorable scenario in undertaking our own platformer/adventure action title, and a new facelift introduced 3 of the 4 current levels, which in the last 4 months has grown into the current version that was playable at Gamepolis.

What are your intended release platforms?

Moisés Moreno: The current demo with 4 levels, is available now available on Google Play, with a version for Cardboard and another version for that can be played with onscreen controls. We have done some testing in GearVR, and have polished up a small version for Oculus Rift. The touch version of The Lost Rupees VR, is obviously not as flashy.

Any idea as to when the full game will release?

Moisés Moreno: We are very happy with how far we have come with the demo after more than 2 years of development, and be among the 10 finalists for the First Edition of the National Indie Games Competition, and present it in two important events such as Freakcon and Gamepolis 2018 where we are very grateful with the great reception the game had received. We also believe it’s time to give a new change of course, and make it the proposed game.

So, for the foreseeable future, the project will be stopped, to focus on what we can do with the mechanics and concepts we already have, and what we can achieve by integrating the Oculus Touch controls. Maybe we’ll even see how this type of game can adapt to the new Oculus Go VR Goggles. So although we will be sad that everything looks like the project will not extend past this demo, we do not know if the demo will see the light on Oculus.

For those of you who would like to see more/know more about The Lost Rupees VR, you can download the 4 level long demo right now, from the Google Play Store or visit the official website with the link below:

Thank you for reading and taking the time to learn about what could become a fantastic VR title when it is eventually finished.