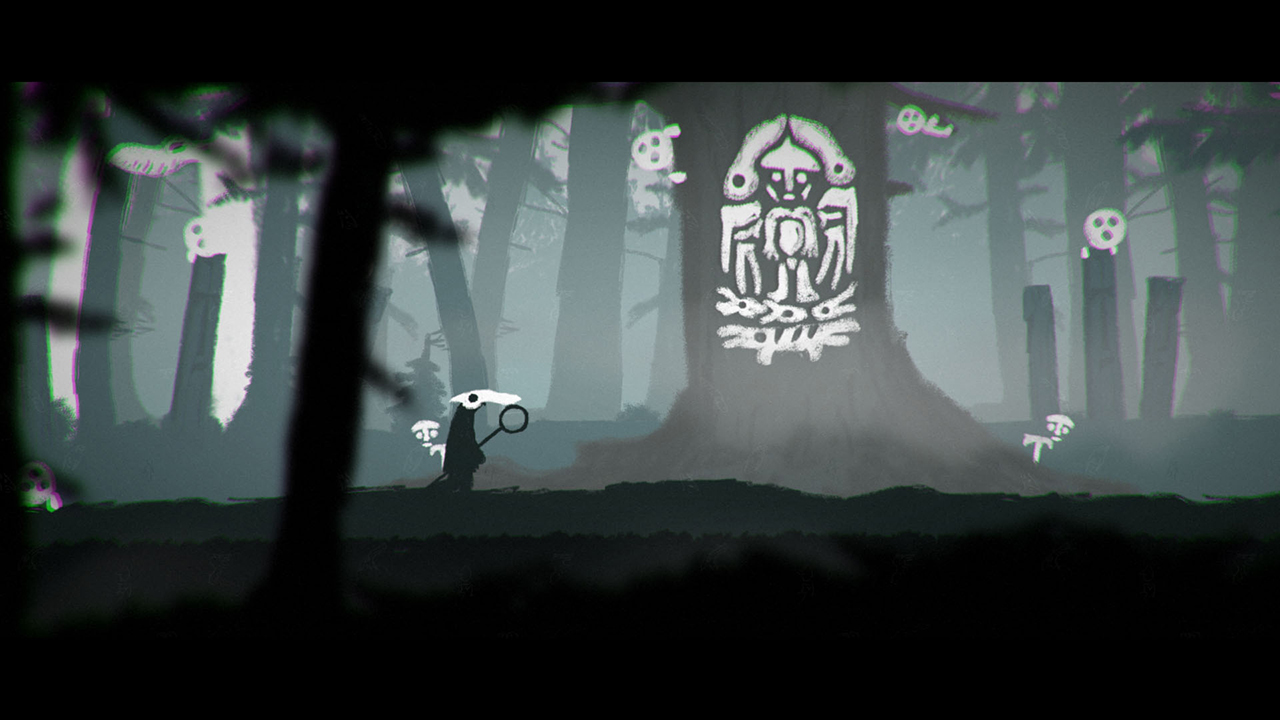 The Man, the Moose, the Legend.

The Mooseman is a port of the PC, 2017 released game now available on Xbox, PS4, and Switch. The game tells the story of a bygone era of Pagan beliefs of the three levels of the world and how they are connected. It is that connectivity that is the basis of the games almost two-hour story campaign and will have you switching between the various realms over and over again as you walk.

The main gameplay of The Mooseman is primarily walking to the right with occasional pursuit/chase areas, a flying area, and a hunting portion. These extras outside of the main walking mechanic were welcome additions to break-up the overall monotony of the game but they weren’t enough of a gameplay hook to keep me interested in the game.

It’s clear from the outset of this adventure puzzle game that the story is told through found artifacts and pillars placed throughout the world that this is a history lesson disguised as a game. The Mooseman does a great job, albeit sometimes inconsistent way of presenting its level design to you. In one area where the dead were chasing me, they looked and animated in a very basic way, whereas the flying portion of one chase scene, in particular, looked polished and really well done. There are boss encounters that are used to progress the game and those are usually visually very impressive. The hand-drawn/painted look of the game’s world is appealing but very basic in most areas.

The puzzles in The Mooseman are very basic, and failure, while it does occur, only has a penalty of retraversing small parts of the game due to its generous saving mechanic along your journey. This was a welcome addition in the areas where I failed to maneuver between the realms during my slow walk across the stage. I didn’t have to reply too many sections as the trial and error during chases usually meant just being aware of how the spirit realm and real-world interacted with one another and how you could manipulate them to work together.

The atmosphere as you trek across the world calls out to you by shifting of realms and forest comes alive with the sounds of animals and the ambiance through various audio queues and orchestral music. If there is one thing that The Mooseman does exceptionally well is that its music and audio is its best asset. I felt very alone in my journey as the world and realms intertwined as I solved puzzles, shifting the layers around me to the spirit world. At times there is almost a sense of aloneness that really comes out in the shifting amongst the dead and the sounds that come along with that world switching.

The audio in The Mooseman confused me. I had chosen English as my language and yet there were some tracks that were in Russian. I felt as though the game was glitching when telling me story parts in a language that I couldn’t understand. I don’t know if this was intentional but it sure took me out of the game when it would do that.

There are a few things I enjoyed about The Mooseman. The sound and audio of the journey is probably its one redeeming factor. It also tells a tale of a lost culture and a unique story that I doubt we will ever see told again through the medium of video games. But does that mean it’s worth picking up? I know I would spend my $6 or so dollars elsewhere as a lot of the game is just walking around.

The Mooseman seems to be geared towards a very specific audience which I am sure is a very small group, especially on the Switch. There is history and culture education throughout the game in the vignettes told through voice and found artifacts, but I am not sure it’s a story that I cared to learn about.

Personally, I feel as though The Mooseman lands itself in that groups of games where you will look at it and say ‘who cares’. It’s a shame though as the story is interesting, just maybe not interesting in the way the 2D walking simulator with very little platform and puzzle solving made it out to be. I feel as though the content could have been delivered in a better way both graphically as well as through the story panels that I read. I don’t think I would recommend spending money on The Mooseman to anyone I know, outside of a few friends of mine that are into cultural history.