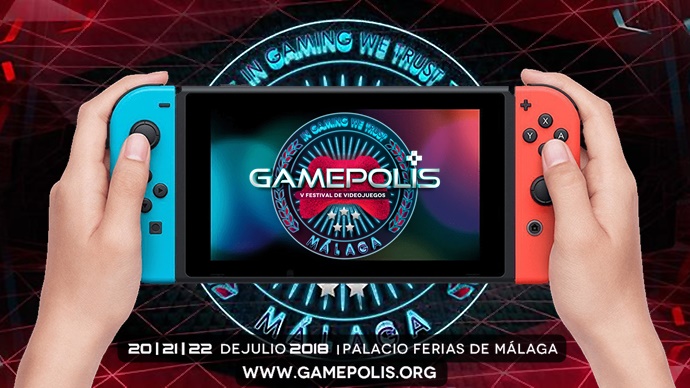 [Spain] Nintendo Switch Is The Star Of Gamepolis Edición VI 2018

The biggest gaming event in the whole of Andalusia, Spain is really really pushing the boat out this year. Gamepolis is celebrating it’s 6th year and with Nintendo themselves officially sponsoring the event, this year will have a huge Nintendo focus and more importantly, a huge Nintendo Switch focus. The Nintendo Switch Is the star of Gamepolis this year and with 600 m2 of floor space dedicated to Nintendo and games like Zelda: Breath Of The Wild, Super Mario Odyssey, Wolfenstein II: The New Colossus, FIFA 19, Fortnite and even Super Smash Bros Ultimate, this year is going to be an event no one will want to miss out on, unless they have been to E3 this year of course.

Here is the official news via the Gamepolis Website.

The Nintendo Switch Is The Star Of Gamepolis Edición VI

No doubt about it: Nintendo Switch is a revolutionary console. After little more than a year in stores around the world, it has won over all gamers for its infinite possibilities. From July 20 to 22 you will enjoy everything the Nintendo Swich offers, the star of our sixth edition of Gamepolis.

We fell in love at the beginning with The Legend of Zelda: Breath of the Wild and Super Mario Oddysey. It promises to marvel us with the new Super Smash Bros. Ultimate, which will bring together the protagonists of dozens of classic video games (also from other companies) to crush each other in frantic combats. On December 7 you can buy it at your favorite store. Do you want to try it before exclusively? See you atGamepolis.

Get around the world from July 20 to 22 for the largest videogame festival in Andalusia. Nintendo will bring its newest and latest games presented at E3 to our event; an opportunity that you can not miss. Nintendo will have an exclusive space of 600 m2 for the release already on sale and, best of all, those that are yet to come for Nintendo Switch : FIFA 19, Splatoon 2 (Octo Expansion), Dragon Ball FighterZ, Wolfenstein II: The New Colossus, among others.

Nintendo Switch and its great titles and novelties will be the indisputable stars in Malaga. Come to the Palacio De Ferías and experience a unique weekend!