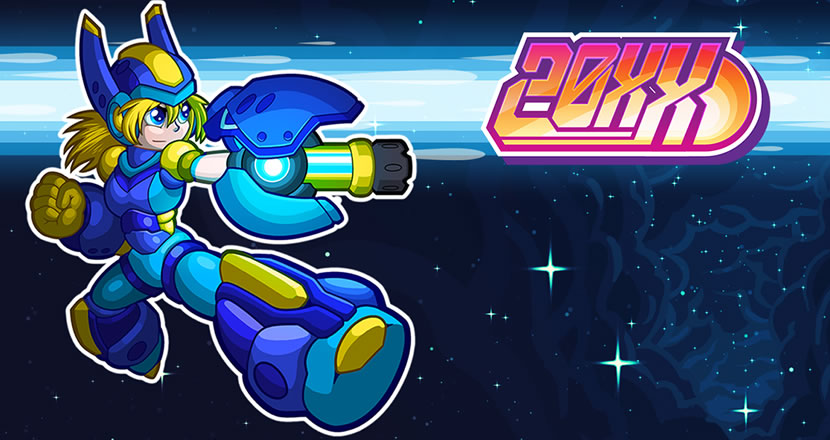 The Word is in danger yet again and Mega Man is nowhere to be found. Fortunately, help is at hand as two incredible individuals armed with their own array of weapons and power-ups, have stepped up to put an end to the mayhem on Planet Earth.

The Mega Man series is a classic that has had many spin-offs and inspired even more clones. Some Mega Man clones have tried to reach the bar that has been set by the original series, but have unfortunately, never come close. One such clone, was Mighty No. 9. It had a lot of hopes raised and seriously fell short to expectation and sparked outrage. Fortunately, this is not the case for all games that are inspired by the Blue Bomber. 20XX takes the gameplay of Mega Man and adds some of its own secret spices to create something familiar yet new. 20XX (pronounced Twenty-Exty-Ex) was developed by Batterystaple Games, an American indie studio, and had an early access version released on Steam back in 2014. August 2017 saw the complete version of 20XX release on Windows. Finally, almost a year later, it has arrived on consoles.

The game begins with the Earth fallen at the hands of machines. Robots have run amok and are laying waste to everything. Above the Earth orbits a Space Station known as the Ark. A pair of scientists decide to send their own creations back to Earth, to stop the machines that are destroying it. Inspired by the likes of Mega Man X, Players can opt to choose between Nina, an armoured girl that uses a blaster as her primary weapon. Or Ace, an armoured boy that prefers to wield a plasma sword. It is up to you to go it alone or with a friend and make your way across perilous platforms and defeat enemies, just so you can destroy all of the final bosses.

Unlike most retro throwbacks that try to mimic the games they are inspired by down to the last pixel, 20XX decides to fight against that and opts for a full colour cartoon look. It makes the game feel fresh and builds on its own identity, as opposed to ripping off the identity of something else. The graphics are sharp and clear in both handheld and docked mode, making it easy to distinguish platforms and enemies from the background. The performance is steady as well, During my playthrough, I never experienced any dip in frame rate, even when I was being plagued by enemies. The Music pays homage to the Mega Man series with its own 8bit / 16-bit chiptune-esque background music and helps tap into that nostalgia vein, even if you have never played a Mega Man game. It’s catchy, energetic and doesn’t grate on the nerves, even after a few hours of playing.

20XX is an action platformer with procedurally generated levels and enemy placements that you must run, jump and shoot your way through. At the end of each level, you will fight a boss that has its own fight pattern and a weakness against other bosses’ weapons. After defeating a boss, you will have the option to obtain his power or choose a random power-up or the in-game currency. Knowing what works best for you is key when trying to make the perfect run. No playthrough is the same as levels are different every time though you may come across familiar segments that look like they may be based on a template. There are four course themes including Artic Datacenter, Skytemple, Flamelab and Spacejungle and any one of these themes could appear multiple times during a run. When you start a run, the first boss is chosen at random. After beating the boss, you will then be given an option out of three bosses that you would prefer to fight next. You will eventually fight all eight plus the extra bosses as long as you can stay alive long enough to do so.

There are multiple game modes to choose from. There is the main “Run” that has three difficulty modes. Reverent (Easy), Normal and Defiant (Hard). The difficulty curve as you progress comes increasingly difficult and when you start off, you will certainly die, a lot. In Normal Mode and above, you only have a single life but in Reverent (Easy) you will have three lives. The Multiplayer option allows you to play with a friend at home via couch co-op or even online. You can send simple commands to each other whilst holding the ‘A’ button down and highlighting the corresponding command like, “Health” or “Crate.” You can also choose to both play as the same character but the first player will always be the default colour. So if Player 2 chooses Ace (Red default) first, and Player 1 chooses Ace as well, Player 1 will become the default red colour and Player 2 will become blue. If both players choose different characters, they will both be the default colours.

Aside from the main campaign, there are also daily challenges, weekly challenges and Boss Runs to whet your appetite. You can also create some of your own randomly generated levels with the Seed Generator and then share the code with your friends so they can play on that level too. There is also a tutorial to help new players get to grips with the controls or if they just want to brush up on their skills. Throughout every run, you will come across three types of currencies. Nuts, Tokens and Soul Chips. Nuts are used to purchase health and energy at vending machines or power-ups known as ‘Augs’ at the shops. Augs help increase a number of stats during your run like health, power, attack etc. and come in two types, permanent and single use. Tokens can be used on the slot machines that appear every now and again. It is a game of chance on whether you win anything useful out of them so don’t risk life and limb to reach tokens that have fallen into death pits. The Soul Chips are required to purchase the permanent Augs after you have died and returned to the Hub.

You can also unlock other useful items that will appear on your next run. Be sure to spend as much of your soul chips as possible as you don’t get to keep them for your next run. Purchasing the permanent Augs will help give you a head start but you can turn them off at any time when you are ready to take off the training wheels. They also only work in Normal and Defiant Mode so if you were hoping to make the Reverent mode even easier, you’re out of luck. A game without enemies or obstacles can be a rather short game indeed. 20XX does not have this problem and is not afraid to throw enemies at you one after the other or in small waves. Most enemies have a variant of themselves that can be stronger, faster or both. They do share the same movement pattern though so if you know what you are up against; it will make it easier for you to take them down. Some enemies will attack you with projectiles whereas others will dive bomb you. Always try to maintain some distance from them as every time they hit you, you will lose life. The recovery rate is extremely short as well so when you get knocked back from the first hit, be sure to get to safety quickly as being swarmed will reduce your life meter in seconds, even if you have extended life.

The most important part of any fast-paced action platformer is precision controls. I am pleased to say that 20XX have made it their mission to provide sound controls that are tight and responsive. I don’t like sloppy controls as I am bad enough a player without the need of an excuse about poor controls. This is not the case with this game and if you mess up a jump or misjudged a landing, you only have yourself to blame. Both playable characters control the same apart for their weapon attacks. Nina relies on ranged attacks with her blaster. Ace on the other hand, has to get up close with his plasma sword. He can do more damage to enemies but he does put himself in harm’s way when the enemies attack. Depending on what Perks you pick up during your run, you can also gain the ability to double jump, glide or fly for a short period. This is controlled pressing the jump button ‘B’ for a second time. Your boss power-ups are mapped to X, L and ZL and if you have more than 3 boss powers, you can remap them to any of the three buttons you prefer.

Fans of the Mega Man series, most notably, fans of the Mega Man X series will certainly get plenty of play time out of 20XX. With the exception of the bosses, every level that you play through is different and you will almost never play the same level twice. With a near infinite amount of levels at your disposal, there is always a reason to play again and again. The fact that you can play with a friend at home or online gives 20XX even more replayability as you work together to try and get the perfect run. This is quite possibly the best Mega Man Roguelike you can get. You can’t go wrong with 20XX.