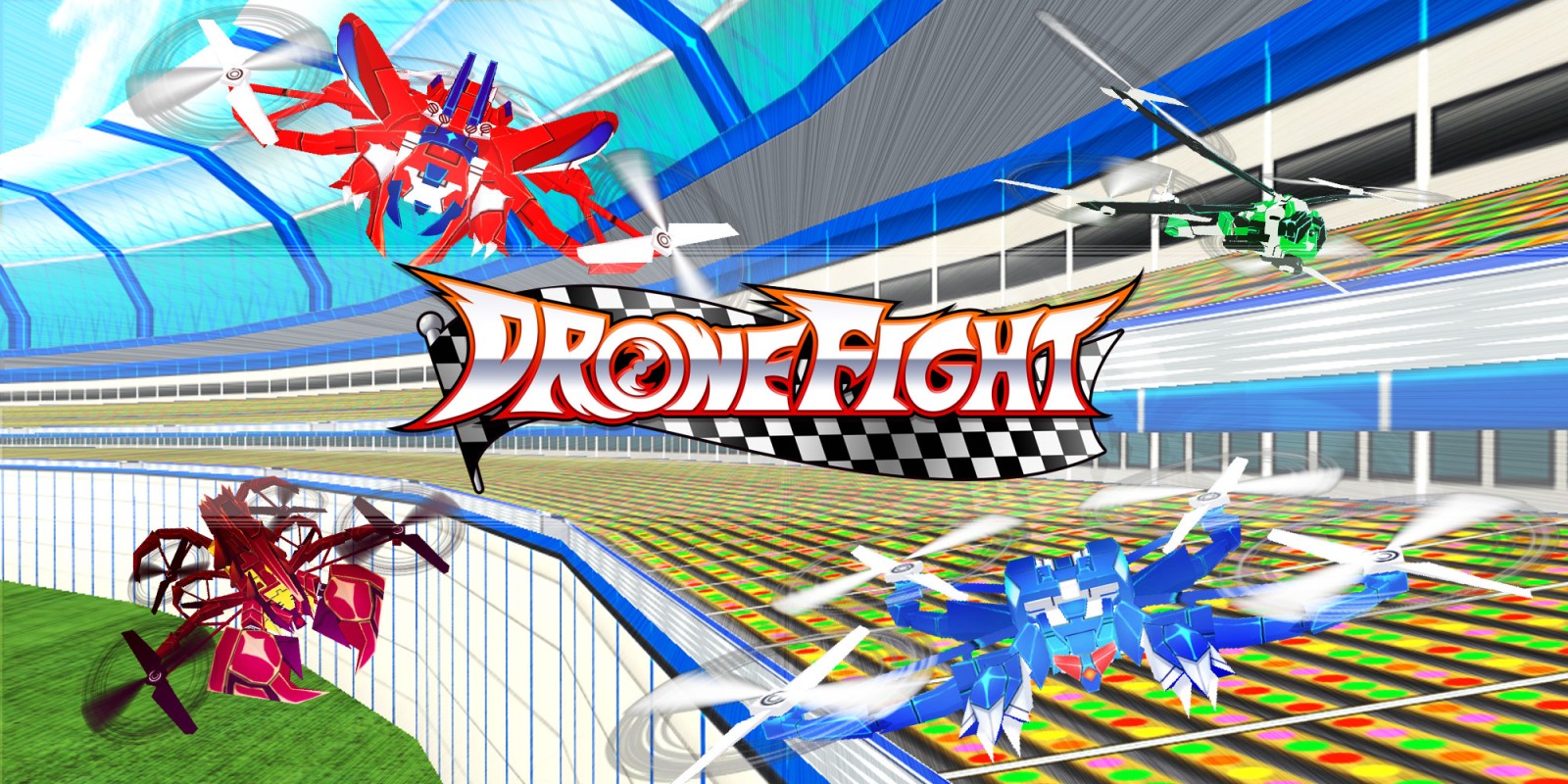 An aerial Mario Kart this is not!

When it comes to the human race, if it can move and either be driven, or remotely controlled, then odds are it has our intention. From flying kites, driving cars, steering toy boats on a pond and flying small planes/drones, we’re quite happy to play with anything, but while cars, planes and even boats have been maybe to make the leap to being the focus of video games and work rather well, can the same be said for drones?

Developed by Silver Star Japan, the best way to describe Drone Fight is by calling it a very simplified Mario Kart, but with drones instead of cars and instead of characters driving karts, cars and bikes, there are none. There are just 4 drones, which differ in what they offer. One is balanced (BD-03 Atlas,) one offers a high acceleration (HSB-02 Titan,) one is more responsive to turning (FC-05 Wyvern) and one that offers pure speed, at the price of being harder to control (SHD-01 Antares.)

Being a racing game you can pick up and play, there is no story, but there are a number of cups you can take part in against the CPU and only the CPU. (Sadly, racing against a friend is not something that made it into the game.) Like in Mario Kart, the is a speed level you can select before picking your desired cup, but instead of 100 cc, the options are Easy 1000 kV, Normal 2000 kV and Hard 3000 kV.

Depending on which cup you choose, will determine the terrain you will have to fly over with the Twilight Cup taking place in the desert, the ACC Cup includes a cat, which I will say nothing more about and if you like rabbits, the Aristolillie Cup is home to courses based on rabbits. There are of course grasslands and lake related courses as well. The cups also come with a difficulty rating of their own in the form of stars and when beaten, you will earn a medal based on how you did.

On the actual gameplay side of things, Drone Fight is severely lacking. With a basic soundtrack and visuals, it’s really not much to look at and the controls can take a bit of getting used to. Instead of using the left analog stick to steer, you use the right one to move forwards, backwards and turn, with the left analog stick controlling your drones ascents and descents. If it makes it easier for you, you can always use the A button to advance and B to reverse and L and R for turning.

Should you wish to pull off a Flip Accel and go faster, you can do so by tilting the left analog stick forwards and pressing both the ZL and ZR buttons. Doing so will consume one of the bars on your electric gauge. Once used, you will not be able to use it again for 5 seconds, but as your electricity gauge decreases, so will your speed. So, it’s a good thing that across every stage you can expect to play on, even during races, will have Elecubes available that will help fill your gauge back up.

Now, on the whole, that all sounds simple enough, but the races aren’t straight up races that require you following a specific track, as the races in Drone Flight, require you to fly through various checkpoints and if you miss one, you will have to backtrack and go through it, otherwise you can kiss first place goodbye, if the opponents were difficult. Even on the game’s hardest difficulty setting, you can quite literally make a number of mistakes and still won’t be overtaken once. The only real thing you’ve got to watch out for is having items used against you and even then, it’s more a minor hindrance when it does happen, as opposed to a blue shell issue. So, if it’s a challenge you’re after, you won’t find it in the CPU Battle section of the game, which covers Prix.

The only mode that could offer you a bit of hassle once you have mastered the wonky controls, is Time Attack, but that’s only if you get obsessed with trying to beat your own times. On the whole, Drone Fight is an abysmal game, but to its credit, there are 3 things that it does do okay. The first is support for Video Capture, the second is a touch-screen supported menu for when playing in handheld and the third is the game’s Help menu. The English might not be perfect, but at least the game does try it’s best to tell you all there is to know about Drone Fight, for the game’s operation to the gimmicks such as wind, speed rings and more that can have a surprising effect on a race, if you’re not expecting it. Still, just because 3 things are okay, it doesn’t mean the game is.

If you are looking for a good indie alternative to Mario Kart 8 Deluxe, because you don’t want to shell out on it, since you already own Mario Kart 8 on the Nintendo Wii U, then Drone Fight is not it. You would actually be better off getting Vector Unit’s Beach Buggy Racing instead. You can not play with a friend, the controls feel a little out of place and Drone Fight has a nagging underwhelming feel to it. On the plus, if you’re not quite put off by it, with the game being available for just $4.99, should you feel like trying it out for yourself, it’s not going to cost you an arm and a leg to do so. What it will cost you though is the time and effort to buy it, download it and play it, which could have all been invested in playing a game you know you do like.