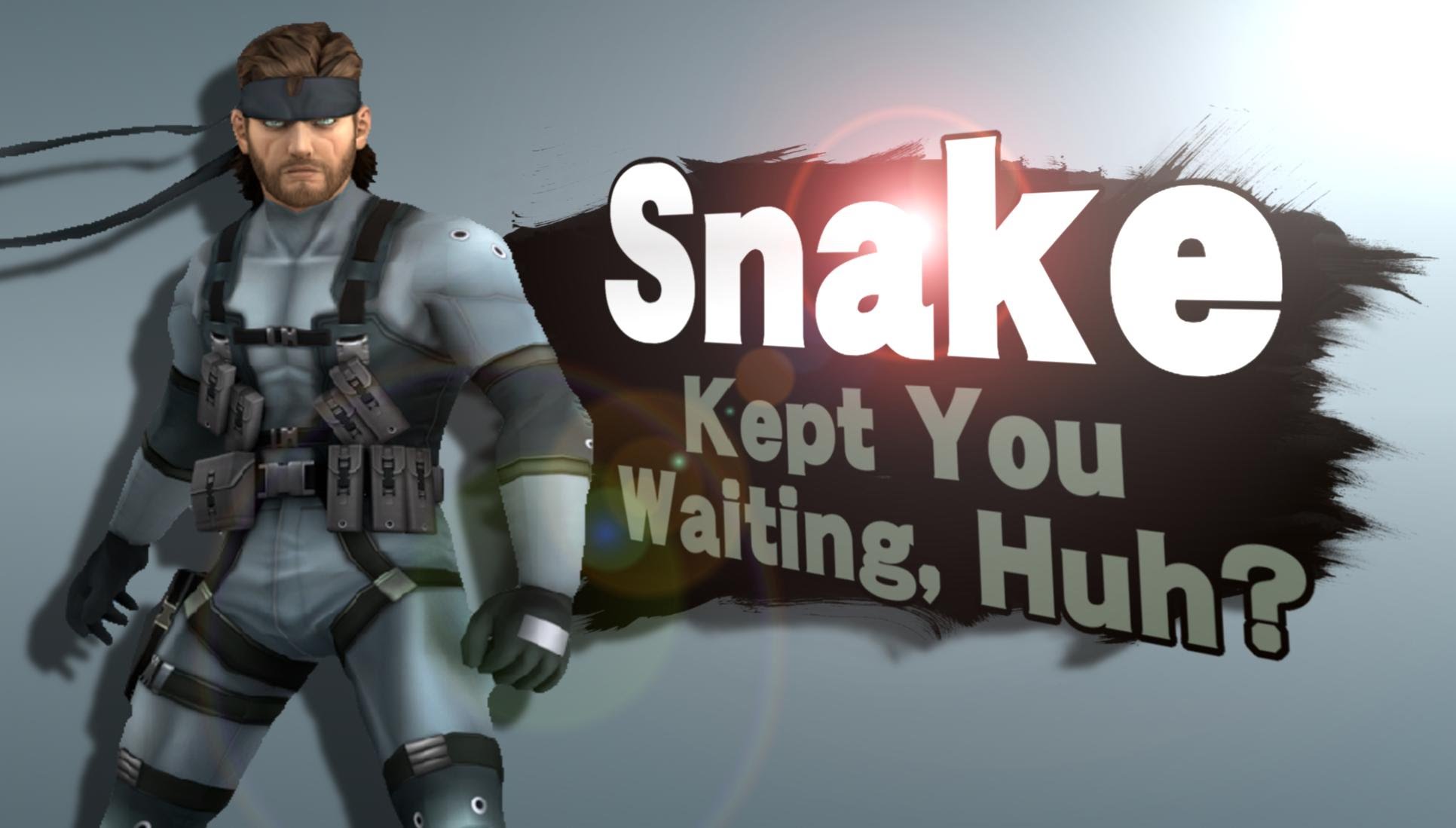 *Warning! This article contains information and speculation from rumours of Solid Snake returning to Super Smash Bros on Nintendo Switch. This information comes from a leaker with a mixed, yet inclining to a positive track record and could hold a grain of truth or be complete falsification.

Back in 2008 when Super Smash Bros Brawl came out on the Nintendo Wii, we were rewarded with characters we thought may never appear in a Smash Bros game. One such character was Solid Snake from the Metal Gear Solid series. His debut was strange yet welcoming but did recieve mixed opinions about his inclusion. Obviously, many people thought that Solid Snake might not fit in with the cartoony videogame violence of the other characters. Snake showed them wrong and instead of relying on his Beretta 92FS, he used his martial arts skills and a bazooka for explosive impact.

Jack and I would main Solid Snake regularly in bouts of Smash Bros. but when we upgraded to the Wii U, we were sad to see that Solid Snake did not make the cut to be in Super Smash Bros. Wii U & 3DS. Though it was never explained why Solid Snake didn’t make the grade, it may have had something to do with Masahiro Sakarai’s friendship with Hideo Kojima. Kojima asked Sakurai to include Solid Snake when Smash Bros Melee came out. Sakurai finally allowed Snake to join in SSB Brawl. When it came to the Wii U and 3DS version of Smash Bros, Kojima was in hot water with Konami and was fired from the company. This may be why Solid Snake was not included in SSB Wii U & 3DS as Kojima was no longer in a position that would allow the continuation of Snake in Smash Bros

This could all change as rumours have begun to circulate that point to Simon Belmont of Castlevania fame could debut in the next Super Smash Bros game that will be releasing on Switch. Castlevania is property of Konami and if Nintendo were to open the door to the vampire slayer Simon Belmont, who he and his kin have been battling monsters on Nintendo consoles since the NES era, there is no stopping Solid Snake from sneaking back in to the series again under a cardboard box.

Simon Belmont is not the only character who is apparently coming to Smash. Leaker Vergeben claims that Ridley from the Metroid series will also be joining the roster and the Ice Climbers will be making a return as well. It must be said that it sounds like a dream come true. With that in mind, it would certainly be wise to take this information with a pinch of salt. Vergeben has been both right and wrong in the past. He correctly leaked the inclusion of the Ninja Turtles in Injustice 2 via the latest DLC to come to the game. He also brought to light the existence of Soul Caliber 6 before it was announced at The Game Awards.

He has also gotten a number of things wrong like claiming that particular characters would be coming to Marvel Vs Capcom: Infinite which, has still yet to happen and that a number of characters would also be coming to Streetfighter 5: Arcade Edition and they have yet to make an appearance. It must be said though that just because it hasn’t happened yet, doesn’t mean it isn’t true. Game development teams throw around a lot of ideas when making games and their is a lot of content that doesn’t make it into the final game. There is the possibility to add content later via DLC and sometimes Red Herrings are thown out as to discredit “verified” leakers so that people would be less likely to believe them in the future.

If Solid Snake was to return in Super Smash Bros on Nintendo Switch, I would certainly be a happy bunny. I would also be excited to play as Simon Belmont as well as he lashes his whip out at, let’s say Bayonetta and shows that witch how the Belmonts deal with supernatural beings.

Thank you for reading this article. If you would like to share your thoughts and opinions with us be sure to leave us a comment. As we have mentioned before, Solid Snake returning to Super Smash Bros is still just a rumour and nothing has been confirmed as of yet.