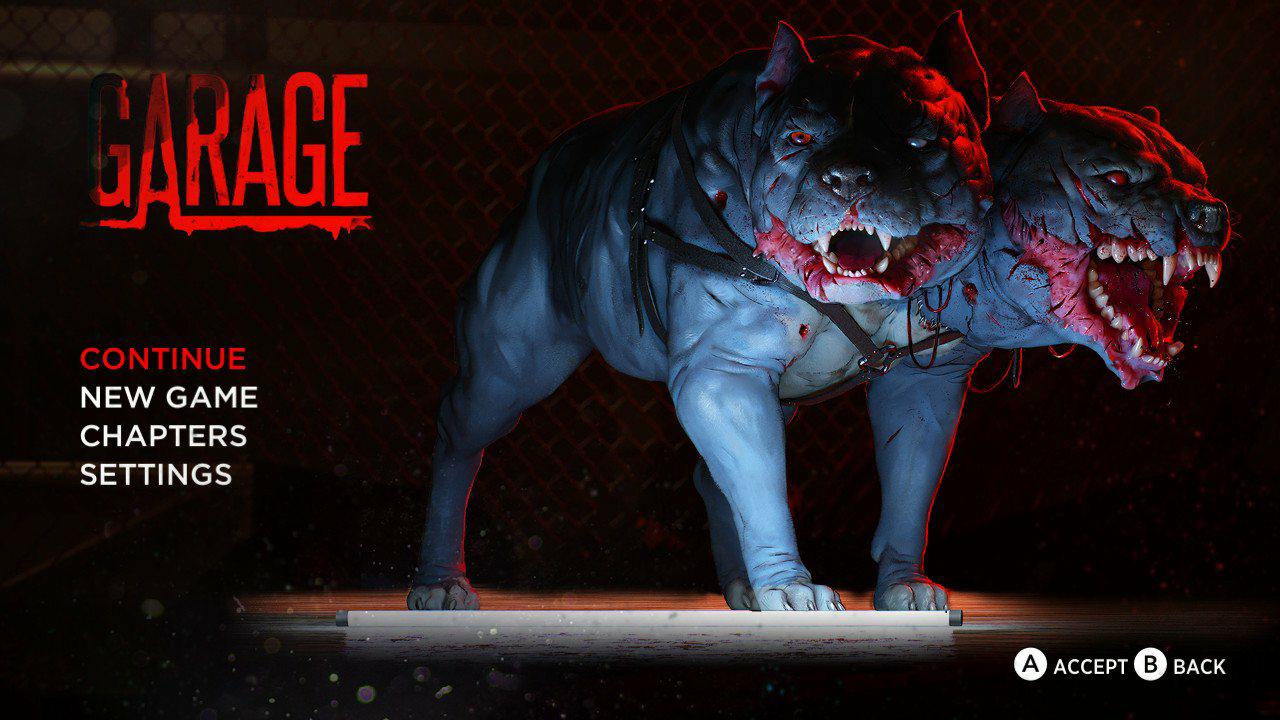 Nintendo has long held a reputation for being a family-friendly company, focusing on bright cheery platformers and colorful party games everyone can enjoy. However, in recent years the company has made it a priority to let third-party developers know that while Nintendo themselves tend to focus on experiences tailored to everyone, their systems are happy to host games of a more mature and violent variety. Garage, a Switch exclusive with horror flair, is ample proof of this. Between the zombie slaying, drug smoking, and wanton murder, it doesn’t get much more mature than this.

The premise sets the tone: Butch, a former drug dealer, awakens in the trunk of a car surrounded by debris and fire. He soon realizes he’s locked inside a crumbling car garage teeming with walking corpses looking to make him their next snack. Soon Butch finds a phone and meets Anaconda, who claims to know what’s going on and offers to help him escape if he promises to save her along the way. Now he must survive the winding depths of the garage, all while discovering its dark and deadly secrets.

Fans of the Hotline Miami series will instantly recognize the gameplay of Garage. The game functions as a top-down twin-stick shooter with multiple weapons and fast-paced gameplay. You’ll use axes, pistols, machine guns, shotguns, grenades and more to cut through the undead hordes and fight your way to the surface. A dodge roll allows Butch to dodge projectiles and put some space between himself and zombies to reload, which makes for some tense action sequences full of wild shooting and rolling. Stages are relatively short, lasting around 15 to 25 minutes with a focus on finding keys and killing all enemies to reach the exit. You’ll also occasionally be treated to cutscenes that help flesh out the game’s story and slowly unravel the mystery of the garage and Butch’s past.

The game’s soundtrack fits well with its style and ranges from pulse-pounding EDM to ear-shattering hard rock (literally – headphone users, prepare to fling your precious Beats across the room in a panic as a sudden blast of explosive rock music comes out of nowhere.) The best tracks in the game are unfortunately played only during very short sections of the game, but when they finally show up they really get the blood pumping. Nothing beats making a prison escape to the sound of heavy bass and powerful guitar riffs.

Aesthetically, Garage‘s art direction is its biggest strength. Enemies paint the floors with a shower of crimson blood and entrails when killed and environments are dimly lit and foreboding. A gritty screen filter and psychedelic visual effects due to in-game drug use only add to the mature horror appeal, but the real standout is the game’s realistic imagery that appears when characters are talking or during cutscenes. These pictures, with faces covered in dirt and grime and horribly mutilated corpses with mangled teeth, are truly disgusting and legitimately scary sights.

Unfortunately, like those B-movies Garage hopes to emulate, poor pacing serves to hamper the experience. Put simply, the game takes way too long to really get started. Those stages full of shooting, dodging and frantic button mashing featured in the game’s trailer don’t occur until around halfway through the experience. The early stages saddle you with nothing but an axe and the occasional zombie shambling towards you from every door you kick open. I get the game is meant to have a survival horror element to it, but when it’s mechanically similar to fellow frantic action fests like Hotline Miami and Mr. Shifty, it feels like a real mistake to spend so much of the game forcing the player to slowly walk through corridors and take out the occasional enemy that can be seen coming a mile away.

The story is also an unbalanced affair, with a disjointed narrative that’s never really sure of the best way to deliver itself to the player. For instance, there are TVs in the environment that will run advertisements and news bulletins that make little sense until much later in the game, by which point you’re likely to have completely forgotten about them. Another example is when you’ll go through a four-part chapter with little to no story whatsoever, only to have a load of exposition dumped put on you at the start of the next chapter. It all feels too disconnected, and the strange infusions of humor in the oddest of places don’t serve to help matters. Even at the end when the game has laid all its cards on the table, it feels as though there were still plenty of important plot details left out.

Most irritating of all is an incredibly obtuse section of the game where you must make your escape from a cell. If you leave the cell you’ll almost immediately be found by the guards and, as you’ve had your weapons taken from you, be gunned down within minutes. I spent over 30 attempts trying to make my way through the facility without being seen, only to be torn to shreds by bullets over and over again. Eventually, I discovered I had to kick down a secret wall in my cell that led to the locked adjacent cell containing a note with an escape plan. After reading it, the lights turned off outside and I could proceed to sneak around unnoticed by the guards. I have no doubt a multitude of players will find themselves stuck and frustrated in this same spot due to the game not giving any directions that would even begin to suggest you should search for a hidden wall. Perhaps the developers will release a patch that gives the player a little more direction during this chapter, but as it stands, it’s needlessly annoying.

Garage is an enjoyable action twin-stick shooter that nails the old school 80s grindhouse style. Poor gameplay pacing and awkward plot delivery hurt the overall experience, but when the game is at its best it’s an exhilarating mess of chaotic gunfights and blood-soaked zombie slaying. Clocking in at around 5 hours, it isn’t high on replay value, but if you’re looking for a distinctly Hotline Miami-like experience on the Nintendo Switch, Garage has you covered.