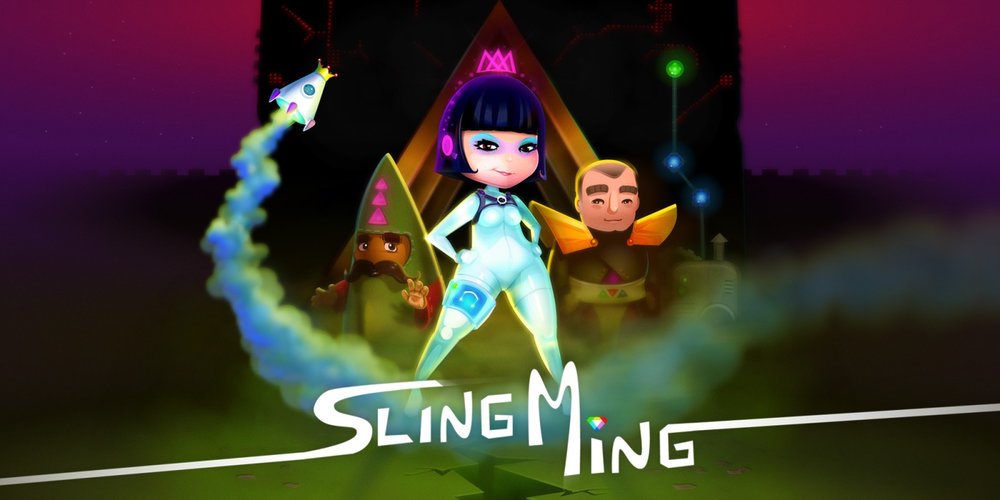 Have you ever picked up a slingshot and instead off pulling back, lining up your shot and then taking it, wonder “I’d love to play a video game where I was the character being swung and slinged all over the place?” Well, clearly the Sweden based developers Good Night Brave Warrior’s had one such thought, because enter Swing Ming. On the surface, it is a game that sees Princess Ming being swinging and slinging all over the place, but at the heart of it, it’s a physic-based puzzle that’s mobile friendly and rather nifty to play on the go, when playing on the Switch.

Being a puzzle game, although there is no need for it to have a story, there is in fact one present and it’s not too sad. Picture this, you are the Princess Ming of the planet Topius, only Topius is in trouble. With powerful earthquakes shacking the planet, Ming decides it is her duty to find out the cause of it. But the second Ming and her helpful advisor make it beneath the palace, a discovery is to be made. The old oxylane (a system that runs all through Topius, providing fresh oxygen to all citizens, during the time the air was polluted) is still present and still fully functioning like the effective transportation system it once was.

Talking of transportation, it is the oxylane that Princess Ming will be using to explore each and every levelling, thanks to a suit she can don and hook up to the line. Her quest won’t be easy as there are more than 40 levels she’ll need to explore whilst tethered to the oxylane, but is she can acquire the 3 crown jewels that are secreted on 3 of the game’s 4 planets, Ming might just be able to solve the solve the mystery behind the mysterious vault, hidden deep underground.

Naturally, being a game, the Princess’ quest will not be move sliding and slinging, as a whole manner of obstacles and hazards are in her path and it only takes a single hit, or one misplaced node, and that’s your lot. Fortunately, being a puzzle game, instead of you having a set number of lives, you’ll just have to restart the current level from the beginning, but things like the green nodes (nodes being attach points for the oxylane,) which can be moved, anywhere within reason, will remain where you placed them prior to dying, so although the player might did and have to start anew, progress you’ve made in the form of moving nodes and hitting obstacles, will remain intact. What won’t remain are things like the collectable itoms. If you succeed in collecting one and finish the level, you get to keep it, but if you got it and died, you will need to keep on collecting it until you can successfully complete the level without dying.

There aren’t itoms on all of the game’s 49 levels, but there are 43 of them and just to make Sling Ming a little harder than it already is, there is more to it than just completing each level. There are also 76 challenges in total that will ask you to complete levels within a set amount of time, finish a level within a set number of transits and even collecting a specific number of coins. Granted you don’t have to try and accomplish each one if you don’t want to, as they are more for the players seeking a true challenge, even just trying to beat a level Sling Ming can a nightmare in itself. In between switching from nodes that will have you travel at one speed, and other nodes that will speed you up, each transition can be life or death. If you’re too low because you’re holding onto an object, you can end up in spikes, or lava and if you’re too high, it’s spikes and lava again.

Then to make it worse, on top of precise movements, there are buttons to hit to open doors and if you hate seeing how much you die in a game, well, Sling Ming keeps track of every single one of them and there is no one to blame for them but yourself. So, don’t let the cartoon-like, hand-drawn graphics fool you, there is nothing kiddy about Sling Ming’s difficulty. Back to the itoms though, you are required to collect them, as they will help you access the boss battle that lurks on each planet. But, in the event you struggle to even make it that far, provided you are nifty at collecting coins, you can use 25 of them to skip the level you’re on.

Should you find yourself not being put off, it is worth pointing out that in addition to being able to use a Pro Controller or even touch-screen controls, which are more effective on the more hectic levels, there are achievements should you wish to collect them, but ultimately, if you are a master of physic based puzzles, Sling Ming is a game that you could easily lose yourself in and complete in 2 hours and the soundtrack isn’t that bad either. I’m not saying I’m a fan, but I didn’t hate it.

Although I’m really not a fan of puzzle games, despite the fact I play a lot of them, Sling Ming is a well thought-out physic-based title with controls that behave exactly as they should. They’re responsive, they can save your life at the last second, but you’re still going to die a lot because Sling Ming is a hard as hell puzzle game, which you can only wish to get better at, provided you’re willing to put the time in to play it and figure out each hurdle.