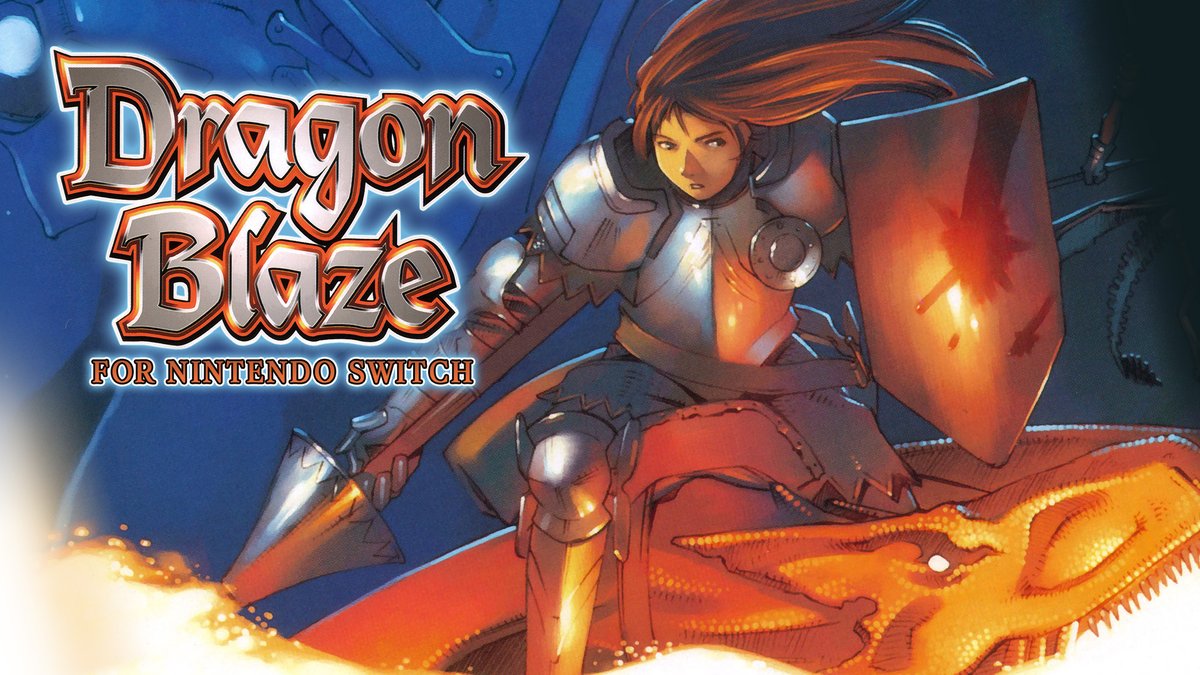 I had an incredible sense of deja vu’ while playing developer Psikyo’s latest shmup to hit the Nintendo Switch eShop: Dragon Blaze for Nintendo Switch. The Switch has no shortage of great bullet-hell shooters to play, and in fact, I had the privilege of reviewing another Psikyo shmup gem earlier this month with Tengai for Nintendo Switch. Dragon Blaze originally released for arcades back in 2000 and was one of the later releases for Psikyo. It was released on the PS2 in 2005 with Sol Divide in Europe and never did see a US release, but fortunately for any shooter enthusiasts it is now out for the Switch and it is totally worth your time.

Dragon Blaze for Nintendo Switch is a vertical shoot em’ up and is very similar to any other Psikyo game you may have played on the Switch. When you first start out the difficulty slider can be adjusted from 1-7 just like Tengai, and the difficulty settings range from Monkey (easiest) to Very Hard (hardest). Once the difficulty is selected you get to choose from four distinct characters: Quaid and his fire dragon, Sonia and her aqua dragon, Rob and his thunder dragon, and Ian and his skull dragon. Each character starts out in a different starting level, but they will converge after beating the same four stages and collecting the corresponding crystals. There is some text between stages, but the story is mostly nonexistent, unfortunately.

First off, Dragon Blaze is played from a top-down perspective like many other shmups, unlike Tengai which was a from a horizontal point of view. Some of the basic gameplay systems of a Psikyo shooter are here, including using a normal shot and a charge shot, but with a little bit of a difference. The charge shot works on a magic-based system and you build the magic gauge by using your normal shot. Once it gets about half way you’ll be able to use the charge shot and it’s more powerful than something you may see in a title like Tengai or Strikers.

In addition to having your main gun and being able to make it more powerful by collecting powerups from defeated foes, it can also gain additional projectiles. For example, Quaid will be firing lances by the time he is at full power or Rob will fire mines that add explosion damage bonuses. This is nothing compared to one of the really unique and cool gameplay features for Dragon Blaze, and that is being able to fire your dragon forward and having it fire alongside you. The dragon will continue to hold that position and fire until you call it back or move your character to its position. What’s great is your dragon won’t take any damage, but you’ll still have to move your character to avoid any incoming fire. Each character also has a bomb shot, such as Quaid’s firestorm or Rob’s electrical barrage, that can wipe the entire screen of enemies.

Like many other Psikyo shoot em’ ups, the stages are randomized, though there aren’t the wide ranges of stages like Samurai Aces or Tengai have. There are a total of seven stages and each character will see all seven in a run, with the first four being random and then they are in a fixed pattern. I wish the stages changed up more as they largely remain the same on each subsequent playthrough with no dynamic changes. The graphics and sprite work are excellent though, with colors that pop and your dragon and the enemies having an impressive amount of detail. Same can be said for the music with the Super Nintendo-like orchestra sound bringing an impressive amount of depth to the firefights.

Scoring in Dragon Blaze is taken by destroying and collecting coins from defeated enemies, Silver coins are only worth 100 points, but if you defeat enemies with the dragon’s main projectiles you’ll earn gold coins which are worth 200 points and this can make a huge difference in your score if you are strategic about which weapons to use. Earning the most points requires you to beat each stage though, and at the end of each level is a boss with two stages. If you’re very skilled you can score a technical defeat of the boss in their second stage by firing your dragon forward right as they flash resulting in a one-shot kill of the boss and a huge score bonus.

You are killed if your character comes into contact with any of the pink projectiles shot from your enemies. Much like Tengai though, if you happen to touch (come into physical contact) with the enemies you won’t die, but instead, your weapon will power down. Also, worth noting is that with the dragon shot your dragon can collect any coins or power-ups it comes into contact with, so you can easily use that to your advantage.

Overall, Dragon Blaze for Nintendo Switch may just be the best shmup to grace the console with its addictive gameplay, beautiful sprite-based graphics, and excellent local co-op multiplayer component. It would have been nice to see some bonus content put in by the developer or more modes to flesh out the experience, but these are minor nitpicks in the grand scheme of things. Dragon Blaze is a must-buy for any fan of shmups and with the lenient amount of difficulty options, is a fun title for anyone who just wants to shoot things up.