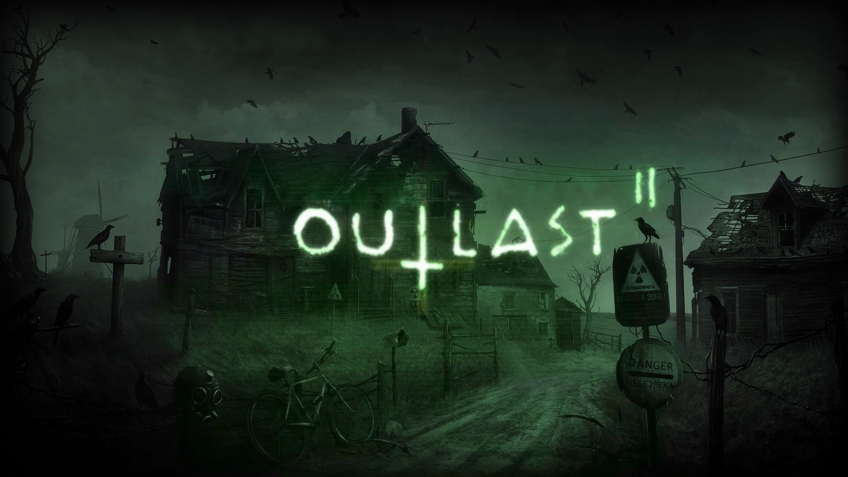 *Warning! This review may contain images that are not appropriate for young children and may contain scenes of blood, gore and bodily mutilation. Viewer Discretion is advised!

It’s cold and it’s dark. Your Partner is missing and you are lost in the woods. You stumble upon a small town out in the country and soon learn that the locals are not exactly friendly. They are deranged, deluded and possess an unquenchable blood-thirst. You are unarmed, afraid and need to get the hell out of there. This is Outlast 2.

Outlast 2 (stylized as OU⸸LASTII) is created by Red Barrels. It is a first-person survival horror game that follows in the same vein as the original Outlast but it is not a direct sequel. Outlast 2 has its own story based on it is own series of events. Due to the positive reception and popularity of the first title, the second title was announced soon after. A playable demo of the game was released for PAX East and E3 back in 2016. After delays in development, Outlast 2 eventually saw release on Windows, PS4 and Xbox One on April 25 2017. Almost a year later and now it is the Nintendo Switch’s turn.

The story focuses on cameraman Blake Langermann who, with his journalist wife Lynn, are investigating the murder of a young pregnant woman known as Jane Doe. Their investigation leads them to explore the Deep Woods of Arizona by helicopter when all of a sudden they crash land into the woods due to engine failure. Blake wakes up sometime later to find that his wife is missing and something unspeakable has happened to the pilot. After making his way to a nearby village, Blake learns that the villagers belong to an extremist religious sect that believes the end of the world is upon them.

The Sect has caused bloodshed, murdering fellow villagers and outsiders alike without discrimination. Infants have been slain to “save” them from what’s to come and what remains of the villagers has caused a divide with both sides as crazed and demented as the other. Blake discovers that his wife has been kidnapped by the one group of lunatics, only to escape their clutches. They are briefly reunited before being captured by the other group. After being knocked out, Blake reawakens to find his wife missing again. Desperate to get out of there but not without his Wife, Blake risks death and losing his own sanity to find Lynn and escape the hellhole they have found themselves in.

The Nintendo Switch has shown to be very capable of running games developed on different engines and Outlast 2 is yet another game that has made a flawless port. Developed using Unreal Engine 3, Outlast 3 manages to throw out good, clear and distinct graphics. Though a lot could be covered up by the intentionally low lighting due to it the events of the game taking place at night. Everything looks to be very well rendered, from the trees to the characters. A lot of attention has been paid to detail. The way corpses are sprawled or suspended and the wounds that have been inflicted on them. The gaunt physiques of the villagers due to lack of nutrition. The Developers really gave it their all to make sure everything looks as realistic as possible, which adds to the horrific appeal even more so.

The Music and sound work further adds to the experience. You will spend the whole experience listening out for any psychopaths before you advance anywhere and the sound effects will constantly keep you on edge. From the autonomous chants of the villagers as they recite verses from the bible to the bloodcurdling screams in the background of another tortured victim. The background music adds to the suspense like when you are being chased or if something bad is about to happen. You will start to notice the hairs on the back of your neck will begin to stand on end every time the music begins to pick up.

Being a survival horror game, the main objective is to avoid capture and stay alive. That is easier said than done as you will most likely die more times than you can count on both hands and feet. You have no means to arm yourself except with your video camera, spare batteries and some bandages. You will spend a fair amount of time running, ducking and diving, whilst usually scared out of your mind because you are trying to avoid being killed.

Blake’s ordeal will have him hurrying through the dense woods, sneaking through decrepit towns and mines to finding himself trapped within his own hallucinations. His past also catches up with him as he is transported back to his old school and uncovers the dark secrets that have been lying dormant in the back of his consciousness about what happened to Blake and Lynn’s childhood friend, Jessica.  As his journey to discover the truth of what happened before and trying to survive the terror of the present. The very fabric of sanity begins to rip and tear, the further you dive into the game.

Your trusty camera is your lifeline. It allows you to see in the dark with its night vision, record horrific events and screenshot handwritten letters. Activating the microphone will help locate where voices and noises are coming from but you do need to moderate consumption. Using the microphone and the night vision will drain the battery in the camcorder and even more so when used together. You are sure to run into a couple of nasty cretins with machetes or traps that can maim you so you will need to have plenty of bandages to treat your wounds. You can run out of bandages and batteries very quickly but fortunately, you will find them in a number of shacks and houses that you come across.

There are five modes of difficulty. The easiest is Story Mode that offers minimal interaction from enemies and allows you to focus more on story progression. It is also a brand new mode that is included with the Nintendo Switch version and will be available as an update for PS4, PC and Xbox One on March 27th. The Hardest mode is Insane- Life Simulator. So if you are a serious glutton for punishment, this will probably be your ideal game mode. There are a total of five chapters named after chapters in the Bible; Genesis, Job, Lamentations, Judges and Leviticus and Revelation and each offer a good few hours of play on the first few playthroughs. The Developers say that average playtime is about 10 hours. If you are planning to speedrun it, on the other hand, the current record is under 4 hours.

Though most of the gameplay revolves around stealth and exploration, there are a number of puzzle elements as well. They usually consist of finding a missing item and putting it back in place so you can open up a way out. Some can give you plenty of time to solve them. Others will have you running around, trying to avoid death by psychopath whilst trying to solve the puzzle.

When I started playing the game, I had rather mixed feelings. Horror films of late just don’t seem to scare me like they use to and there all seem to bang the same drum. Horror games, on the other hand, I have begun to play more and more as of late and they have given me much more of a fright than even the best horror films of the last 10 years. Outlast 2 is not a perfect horror game but it is still a pretty darn good one. There were moments I was genuinely terrified and had to remind myself it was just a game. I started to fear death itself, which sounds crazy but the experience was very immersive for me.

You will die, a Lot! That is a given and some parts of the game can be very confusing. You can spend hours trying to escape one part of a level, as there is no indication on how you get to where you need to be. The objectives are clear but trying to get to the destination is the real challenge. The sites of dead bodies that have been brutally murdered and grotesquely posed is truly an unnerving sight. The fear of suddenly be jumped at any moment stays with you from start to finish and yet, I persevered until the end. I needed to finish. I needed to survive.

Never have I ever played a video game as darkly disturbing and morbid as Outlast 2. I will be having nightmares for at least a month. The gameplay is simple yet complex and relies on you being able to keep your nerve. As much as I was horrified of the sights I saw in the game, I was enthralled on how well represented the visuals were. I wanted it to end and yet I wanted more. I was terrified and confused but boy did my adrenaline spike at every chase sequence.

Outlast 2 is not for the faint of heart or for those that just want to blow things up. It is a solid horror game and performs well in both docked mode and handheld mode. The added bonus is you can play it in bed for an extra touch of security. However, maybe not when your partner is lying next to you, sleeping. You may give them just as much of a fright every time you jump out of your skin. There are quite a few horror titles on the Switch and if you can only afford one. Outlast 2 should certainly be on top of that list.