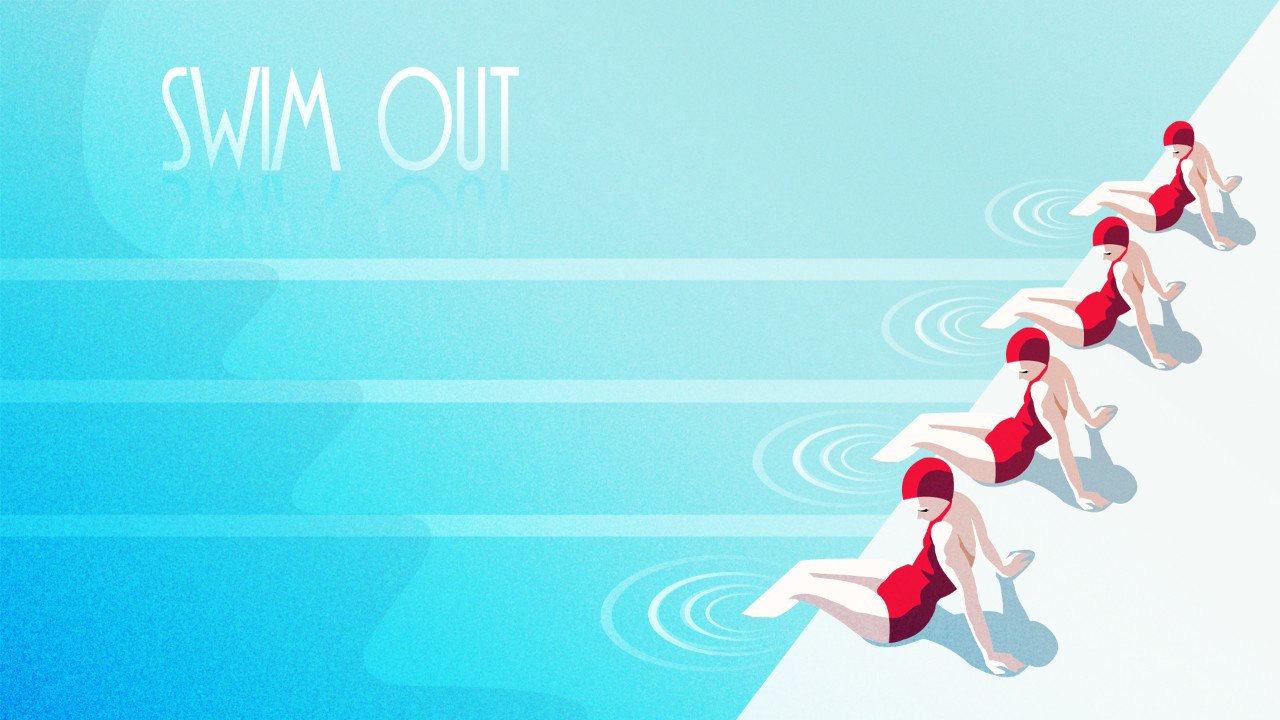 For us in the colder regions of the world, we can’t wait for summer to arrive and luckily that means the temperatures are going get warmer. We will look forward to going outside and playing in the sun, until you realize that it’s just too hot and in that instance prefer to cool off in a large body of water. Fortunately, you can go ahead and get a head start in developer Lozange Lab’s Swim Out for the Nintendo Switch, a simple yet effective puzzler that should keep casual players satisfied.

Swim Out is a puzzle title that is very simple, but this does not mean it’s bad in any way, shape, or form as long as you go in knowing what to expect. There is no story to speak of as you play as a swimmer dressed in blue and you have to move in one of four different directions in order to avoid other swimmers. You move in a turn-based fashion, meaning every time you move most of the red-dressed swimmers will also move and some swimmers have different swimming patterns.

The goal is to make it through each stage without colliding with one of them because if you do you’ll have to start over from the beginning of the stage. That’s pretty much all there is to Swim Out with you controlling the character by using the left analog stick or the d-pad. You can also use items you find in the water to either stun, dive underwater to use a turn, or swim two turns instead of one to solve some of the puzzles. If you prefer touch controls, the Switch versions comes with touch controls from the iOS release if you prefer to move and use items that way.

Occasionally you’ll come across items in the pool, such as beach balls or floaties, which you can throw at other swimmers to stun them from moving for 1-3 turns. I don’t know how hitting someone with a beach ball would stun them versus just making them angry, but I guess we’ll just have to suspend our belief for this title. As simple as Swim Out is to play, there are multiple worlds with a variety of different scenarios and ways to go about solving a puzzle and there is a nice continuous difficulty curve to the title.

None of the levels felt cheap and if I ever became stuck on a stage, it was because of my own doing. I appreciated how some of the puzzles really put my mind to the test in what looked like impossible solutions to conquer, but I was able to quickly solve on my own. There’s not much level variety with the same types citizens and obstacles to avoid, but I found the simplistic nature quite relaxing and was rarely became frustrated with trying to figure out a solution. You basically start off at a pool, then you go to a busier pool, and then you go to areas such as the beach and lakes which provide a little scenery change.

Graphically, Swim Out is simplistic, but it’s very eye-catching with bright colors and relaxing environments. I enjoyed looking at it, which made solving the puzzles a little more satisfying. There is nothing really to gripe about with Swim Out other than it would have been nice to have some sort of menu system when you first start up the title. However, on every subsequent run, you will actually start at the stage select where you can revisit past puzzles and for some stages try and collect the stars in the water making for more of a challenge.

Overall, Swim Out is a simple, yet effective little puzzler that succeeds at what it is trying to accomplish: provide a rewarding casual experience. It’s the type of game you can randomly pick-up-and-play, and feel satisfied from completing a few stages at a time. This especially makes Swim Out great to play on the go and doesn’t require a hefty investment. With over 100+ puzzles to solve, Swim Out can be taken at any pace you want and still be enjoyable.