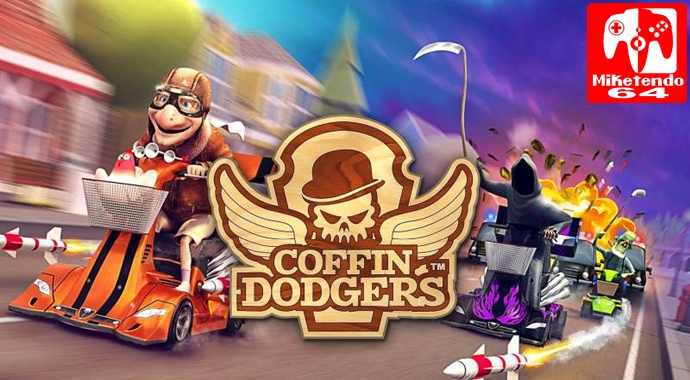 Here’s a review of Coffin Dodgers. Not a very exciting intro paragraph, I know, but rest assured that this level of effort is very much keeping in line with the standards set forth by the fine folks at Milky Tea Studio.

Let’s start with the premise, the only remotely interesting thing about Coffin Dodgers. As the title suggests, you can choose from seven septuagenarians who are just a few raggedy breaths away from meeting their maker. When the grim reaper comes knocking at their doors, they all decide to trick out their motor scooters and challenge Death to a race for their souls. With such a wacky setup you might expect a lot of hilarious moments from this bunch, but since they don’t have any voiced dialogue, comical animations, or personality whatsoever outside of their short flavor text when selecting them in Story Mode, they’re essentially just alternate skins of the same bland character. They don’t even have unique stats!

But enough about the cast. It’s the driving that makes or breaks a kart racer… and boy does it break. This is about as bog-standard as a racing game can get. You can accelerate, brake, turn, and that’s it. No fancy drifting or power sliding to add a little skill to the proceedings, as your kart is always able to make the sharpest of turns without any assistance. I was almost pleasantly surprised to see that auto-acceleration is an option here, but bizarrely the game will keep this feature activated even at the starting line, which will cause you to always lose control in the first few seconds of a race should you leave it turned on – not that you’re ever in any danger of losing. Within the first few minutes of playing, I immediately discovered an obvious exploit that completely destroys any semblance of challenge the game might have offered. Not since Mario Kart DS has a kart racer been this easy to cheese. Are you ready to learn how to perform this game-breaking gimmick?

No, I’m not kidding, that’s literally it. If you quickly alternate turning left and right over and over on any straightaway, you will magically gain enough speed to overtake all CPU opponents. This, of course, has an adverse effect on multiplayer as well, as you and any friends dumb enough to play this disaster with you must either mutually agree not to use this braindead tactic or spend the entire race assaulting each others’ ears with the sound of clicking sticks. Luckily there are the obligatory items scattered around the track to help you catch up to your fellow glitch abusers, although what they have to do with the game’s theme is beyond me. Why on earth am I picking up rocket boosters, energy shields, and Uzis? If you’re going to make a game about senior citizens, why not have some thematically appropriate items like projectile dentures instead of heat-seeking missiles, or a malfunctioning hearing aid instead of a generic sonic blast? At least they bothered to add a melee mechanic where you can spam the B button to shake your cane at opponents, which can even lead to an instant knockout if you hold the button long enough.

Interesting track design would go a long way towards salvaging this mess of a game, but Coffin Dodgers never passes up a chance to aim low. There are thirteen courses, which sounds a lot until you realize that they all take place on the same map, just with certain areas clumsily sectioned off in various ways each time. Move over Ridge Racer, there’s a new king of recycled track design. It doesn’t help that they almost all exclusively consist of dull, flat terrain occasionally broken up by the odd ramp (which you’ll intentionally avoid since dodging them is always faster than driving over them, even when the game tries to trick you by placing a speed boost arrow in front of a ramp). The same goes for underground areas, which are just as devoid of obstacles and challenge as the rest of the course.

In terms of modes, there’s not a lot of variety here. There’s a Story Mode in lieu of the typical Grand Prix, though given that the only story to speak of is found in the intro and incredibly poorly animated ending cut-scene, they really might as well have not even bothered. In the unlikely event that you have trouble stomping the computer-controlled opponents using the laughably easy left-right glitch, you can even spend coins earned in-game in the Garage to get an edge on your competitors by increasing your scooter’s stats and unlocking extra item slots. There’s also a pointless “Open World” Free Roam mode that allows you to aimlessly wander the full map with no objective, as well as an only slightly less snore-inducing sub-mode called Crazy Granddad where you follow two Crazy Taxi-esque arrows (I’m pretty sure there’s only supposed to be one, but clearly QA is not Coffin Dodgers’ strong point) around the area to find an assortment of items before time runs out.

Lastly there’s four-player split-screen for when your friends desperately want to play a kart racer on Switch but you lost your copy of Mario Kart 8 Deluxe. If you’re wondering when I’m going to finally say that online play is the one redeeming factor of this game, keep wondering, because there isn’t any online play. I haven’t even mentioned the awful soundtrack that ranges from aggressively annoying to brutally boring, the repetitive and uninteresting visuals, or the low-poly character models that look like they’ve escaped from a long lost N64 game. I find the latter particularly offensive, as the eShop page shows off some hi-res screenshots of scenes that look vastly different in the actual game. Compare this advertised image with what you actually get:

Mediocre in every aspect, Coffin Dodgers is yet another substandard kart racer that does nothing to justify its own existence in a gaming landscape filled with far superior choices. Forget cheating death – after playing this, I welcomed it.

Did you enjoy our Coffin Dodgers Switch Review? If you would like to read more of our Nintendo Switch Reviews, feel free to check them out here.