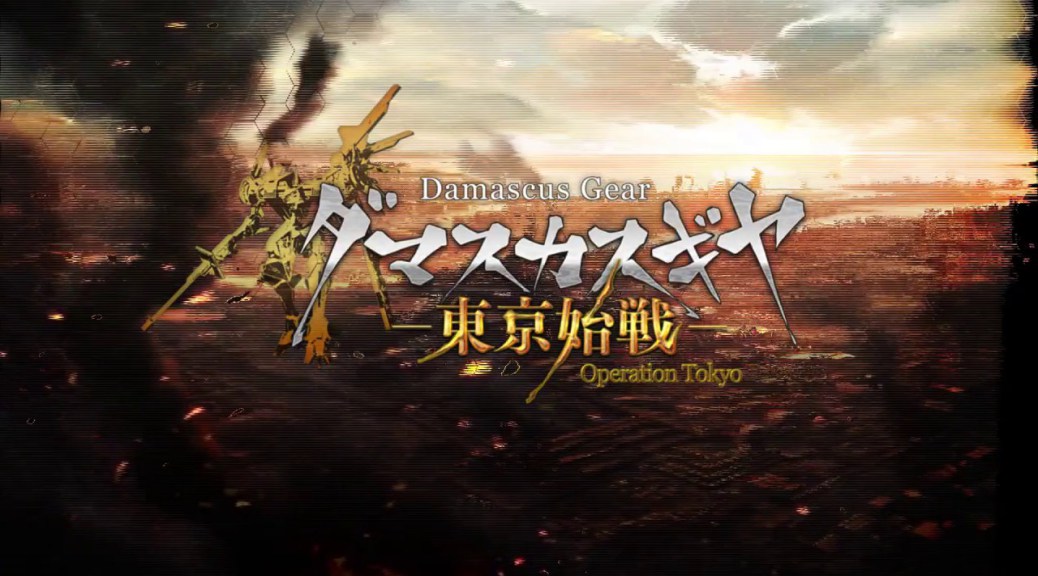 Have you ever wondered what would happen if Diablo had mechs and was light on looting? No? Well…Damascus Gear: Operation Tokyo answers a question that nobody asked!

Damascus Gear: Operation Tokyo begins when we are given the option to customize our mech (aka Gears). At the very beginning, we are only able to change the color of our Gear’s different parts for now, but later on, we will be able to customize the look and functionality of our Gear using parts that we have harvested from defeated enemies, or that we have purchased from shops. You can choose colors and components that make up the head, body, arm, leg, shoulder, right weapon, left weapon, and back. When I first began playing the game, this was the feature that I was most excited about. I haven’t played a solid mech game in a good long while, and customizing my mech with different components has always been one of my favorite mechanics in those games.

Unfortunately, the customization is fairly limited in selection. While there are dozens of different types of gear with obvious appearance differences and individual stats and abilities associated with them…there is really only ever one piece of gear that is worthwhile- whichever is the best. While this sounds reductive, nearly all of the options have their strengths and weaknesses so poorly thought out and nearly universally distributed, that you don’t find yourself willing to give up a little evasion, speed, or defense power to have more of the other.

There is always one piece of gear that does one or all things better than the rest, and the discrepancies from one component to the next is so minimal that it may as well not be there. This is good because it makes sure that you have plenty of money to use for buying other parts and repair kits (which are how you restore health in battle). Really, I should just say “so that you can buy repair kits”. There is no other reason for money to exist once you start doing missions. The parts you recover during your missions will always be better than anything that is available in the shop. The only decision that you really have to make is whether you want a single or dual handed melee or ranged weapon, or a mix of single-handed melee and ranged.

Damascus Gear: Operation Tokyo finds you in a mission-based, isometric action game with winding paths through a war-ravaged city. It is your job as a new recruit of the Anti-Rage Specialist Organization Freya 4th Division to hunt down and eliminate the Rage threat that is destroying our world and eliminate them. Actually, no, that’s not true. Your mission is to simply fight Rage. It is a foregone conclusion that humanity is doomed at this point, and everyone seems pretty confident about that. So, you’re fighting various super-powered robots with your mech suit for the sake of being a badass in a mech suit, apparently. That’s not a bad premise, actually. The meat of the game will be found in your missions. These generally consist of your run of the mill objectives such as killing a certain amount of Rage robots, finding and destroying a specific type of Rage, delivering an item to a location (fight your way through robots until you get to your destination). There is a little variation between mission, but none of it really feels much different than the last mission.

Like in Earth Wars, you are given AI controlled teammates to assist you in your futile attempts to winnow down the number of Rage. Unlike Earth Wars, these teammates actually do something to help! They hunt down the nearest Rage that are shown on screen and will fight and kill them. They’re especially useful when there is a high powered boss to be tackled. They don’t follow you around, though, and this can be problematic. It seems like if you aren’t with them, they don’t worry too much about self-preservation. I noticed that if I replayed a mission, and just let my squadmates go off on their own, they would usually die before we made it to the end of the mission. If I stuck close by them, they would generally survive the mission, and usually with more health than me. Obviously part of it is that they’re less likely to get hit when I’m also a target, and my presence also means that enemies are defeated more quickly, but it still seems like they just rush in and get hit a lot more than they should.

Combat is like basically everything else in Damascus Gear: Operation Tokyo- it is fun at first. You rush into a horde of mechs, hack and slash and shoot your way through and around them, refill your health as necessary, and then boost around the map until you find another horde and repeat. It’s all great, mindless action. For the first set of missions. Then, it just becomes repetitive. Nothing changes. It just starts feeling like a cycle of the same experience over and over. This is made worse by the muted color palette of dark greys and navy blues. Sure, it’s supposed to be a ravaged city full of broken up chunks of rebar and concrete. Asphalt roads riddled with potholes and surrounded by the wreckage of collapsed buildings and exploded machinery, but a little bit of variety would have been nice. There is also this annoying smoke that covers the entire combat area and obscures everything that’s happening underneath. You simply have to keep spamming your attack button until all of the enemy health bars are depleted, or the smoke clears.

The sound design in Damascus Gear: Operation Tokyo is maybe one of my favorite parts of the game. Not because it’s particularly well done, but because almost everything sounds like it was pulled from stock files, and has this vaguely familiar quality to all of it. The sound it makes when you scroll through the different parts of the menu and mech part selection is almost exactly like the menu selection ping from Castlevania Symphony of the Night. There only seems to be one song that plays throughout the narrative sequences that introduce and close out every mission- and it starts off sounding like Pokemon, but ending with the victory music from a 16 bit RPG. The familiar, generic sound effects, and formulaic gameplay make Damascus Gear: Operation Tokyo a prime example of how a game with accurate controls and an interesting idea can just fall flat. I only wish that they had done something more to make customization meaningful, which would have enhanced that aspect of the game, greatly. Different styles of maps, and a larger variety of combat would have been amazing- like having local co-op, or the ability to cycle through your party members when they were in different parts of the map. A lot of things.

Damascus Gear: Operation Tokyo isn’t a primary example of a completely mediocre game, but it also doesn’t do anything to innovate or improve on mechanics that we’ve all been familiar with for decades. The game can be fun in small doses (very small doses), and the controls are precise. Hacking and slashing through a horde of enemies is just as fun now as it always has been, but when I get to that fortieth group of enemies, it shouldn’t still feel exactly like the first time that I had a horde of enemies, or even the twentieth group of enemies. Wait for a sale, play it in 10 minute chunks.