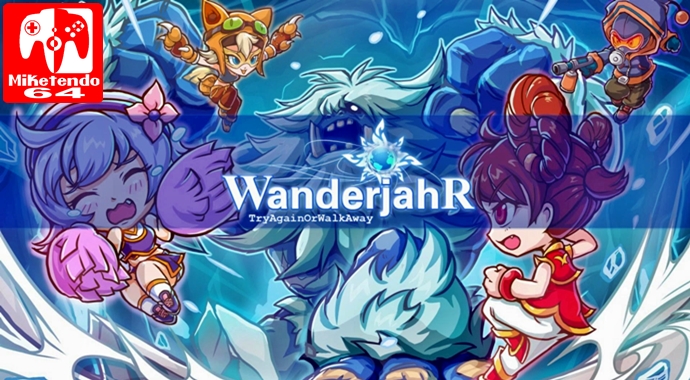 Kawaii on the surface and an absolute challenge on the inside!

If you have ever harboured the desire to play a JPRG that was developed by a one-man team, then you are in luck because thanks to Corecell Technology, who helped bring Wanderjahr TryAgainOrWalkAway to the Nintendo Switch, Wanderjahr was in fact developed by the man studio that makes up Workryie and it is surprisingly good! While some might argue it’s more of a Strategy game as opposed to your typical RPG, there are plenty of elements at play, which do entitle the game to be branded as such, but what you see with Wanderjahr, is not what you get.

Yes, the Kawaii looking designed characters, are light and friendly, like the funky pop music that plays throughout and even the cutesy wat the game’s story is told, but Wanderjahr is a hardcore JRPG that will challenge your very skills, but we’ll get to that a little later. Right now, we’re going to cover the game’s story real quick: In a world, where peace has been attained, thanks to events that took place 101 years ago when the Universal Source Code was discovered, humanity came to understand the code and saw to it to remove malevolence and evil from the world. For the most part, it was a success, but even with countless impossibilities being conquered, with 2 weeks all that is left between the final phase, chaos has returned, thanks to monsters pouring out from every corner of the globe. Is it mere coincidence? Or all part of a far more elaborate plan? This is precisely what UN Jariya will need to find out.

As the player, your job is to assist with UN Jariya’s monster eliminating goals, whilst taken your orders from C the Operator who is always on hand to provide guidance in and out of battle, which even includes hints and tips when back at base. As for her partner in crime, Matrix, he’s more into field research and provided you can find him as Wanderjahr has many fun little secrets to seek out, he will join your team which will ultimately consist of 18 different characters and help out in battle. With his researcher prowess, he can study the skills used by monsters you’ll encounter and create helpful items for them, but when in a pinch, he’ll even offensively help you as well, so that’s pretty cool of him!

So, because it’s a JRPG, it is fitting we talk about the action, so, being the monster hunting you’re to control, while Wanderjahr is an action game, it’s also a point and click game, with button support, so if you don’t want to click and drag items to the characters you wish to use them on, you can just hold ZR and press the button assigned to the characters you have placed on the battlefield. Despite having 18 different characters that fill your team, which toy can take into each battle once you have them all, only 4 can ever actually fight at the same time, so should you wish to remove a particular fighter from the fray as your thief has stolen all there is to steal and is no longer harming anyone, (just one of a few character types who take a defensive tact,) it just means it’s time to put your Vanguard into play.

Sadly, during in the first Stage of the game, you only get one of them and one Buster (magic user,) so keeping them alive is a must, but more soon come your way, should you make it past the first boss battle, which will test you both physically and mentally. Should you be happy with who you have on the field though, with no need to put in a Medic or an Entertainer to buff certain stats, all combat is done in real-time, with your heroes and the enemy striking and using their skills as they wish, with you solely having to manage your team, swap units, press R to target specific enemies and Y to collect the gems (or touch the screen where they are) that are dropped and can be spent in the shop.

Whilst overseeing the battle might not sound all that exciting, it is something that will keep you on your toes, as you will be constantly tapping the screen to do inputs as the battles don’t just get intense, they get infuriating, especially since there is a lot to know. Firstly, once unlocked, all enemies have a life and a guard gauge. When the life bar is depleted, the enemy is dead, but with the guard bar, enemies will sustain less damage and their guard gauge, although it can be depleted via physical and magical attacks, resulting in a state called Guard Break, the guard bar can refill, so you will need to act, so when the enemy or boss enters Guard Break, you better step up and destroy them, because they won’t be extra vulnerable for long!

There’s also Soul Blast, (introduced in Stage 3,) which when the enemy has entered Guard Break, by acting swiftly and having any of your Busters to inflict magical damage upon them, their Soul gauge will deplete, causing even more damage to be caused to the enemy when you send in your vanguard unit to finish the job. As for the rest of the time in battle, while those tidbits will steer you clear to victory for the most part, there are enemies you will need to “figure out” to realise just who you need to use against them and how. (Spoilers, using X can help with this.)

Provided you do win the battle, as there will be many you’ll lose as I lost my fair share, there is a battle result screen that will see you earn anything between 0 and 5 Stars and a crown, depending on your progress. Naturally getting 5 Stars and the Crown is what you want to strive for every time, but it’s okay to fail here and there as there is a lot of grinding with Wanderjahr, so while you might not be able to fully complete every level, every time, once you reach a new Stage and have the max level cap raised, you can always replay it when as a much more stronger team. Also displayed during the Battle Results screen is the time it took you to complete the level, how much EXP you’ve earned and Gold (the gems.) You’ll also see “Ok” and “Setup,” with the former taking you straight into the next battle and the latter letting you return to base, where you can do things like go to the shop and purchase the items and artifacts that will assist you in battle and level up.

Unlike most JPRG games, it doesn’t matter who fights in the battle, as the experience all goes to you and it is down to you, to decide which of your heroes should be levelled up, so if you would rather strengthen a weaker unit instead of one you can rely on, that’s your prerogative, but should you wish to make it to the next stage, every single one of them will need to max level before taking on the regional boss. (It’s a total massacre otherwise.) Other things you can do, when back at the base is: Organise your squad line-up to better suit your preferred style, access the gallery, which will clue you in on the monsters you’ve encountered, story events you’ve unlocked and even keep an eye on the achievements you earned, but the base also allows you to access the world map so you can select whichever level you want to play, when you want to play it, provided you’ve unlocked it in the first place.

As a gamer, there is a lot to Wanderjahr I do like, as the touch-screen controls are easy to use and the quickest way to play, with Pro Controller support present, in case I feel like doing things in TV mode, and the battles and character skills are interesting, but there is no denying the game’s overall difficulty and it’s attitude. It’s almost as if this game is daring you to beat it and if you can’t, it’s because you’re not good enough and quite frankly, I know we had Celeste lately, but games of this last 2 decades have really softened us up, so when a hard one like this comes along, of course, I’m going to grab it with both hands! Wanderjahr is a nightmare and I like it, so much so I’m willing to look past its typos, but do you know what it’s most alluring feature is? Wanderjahr comes with a very informative manual, which when read, will clue you in on all there is to know, but still set you up to fail, as knowing is one thing, and doing is another and right now, I know I like Wanderjahr, but, just how much?

Despite the cutesy graphics and its $9.99 price-tag, Wanderjahr is not to be counted amongst the low-tier RPGs we’ve seen grace the Switch eShop in recent months. Beneath the childish surface, lies a game of substance and skills, as it actually forces you to either play it and be there to grind, or don’t play it at all, because if unless you’re there to collect the gems that have been dropped, target a specific enemy, or change units, as you have instead opted to boot the game on and leave it somewhere for a few minutes, things will almost never go the way you hope they would be. The only way to play Wanderjahr, is to play it. To endure the struggles, embrace the difficulty and take it head on, because failure to do so is the recipe for failure. Should you need to try before you buy and/or commit, there is a demo available and it is a fair representation of the full experience.