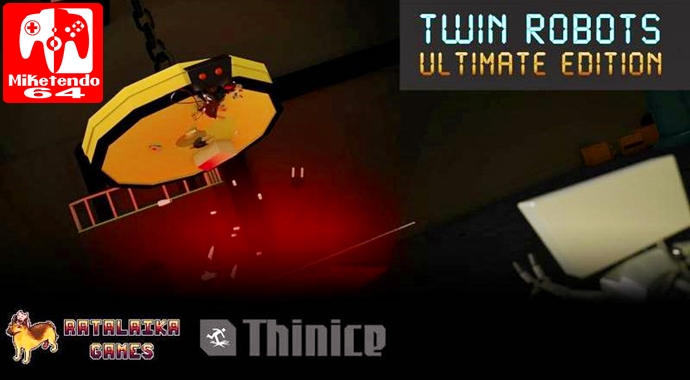 Two robots, one goal…Life. Do you have what it takes to see them to safety?

Developed by Thinice Games and released in 2013 for the Ouya game system and then later on made available to platforms that include Steam, Wii U, android and iOS, the 2.5 platformer once known as Twin Robots has undergone a face-lift and born anew on Nintendo Switch. Now going by the name of Twin Robots: Ultimate Edition, the enhanced port comes packed with more content than the previous instalment, which means in the tradition of review improved/enhanced ports, it’s time to cover what’s new first:

Whilst it was decided to improve upon Twin Robots as opposed to developing a sequel, the 2.5D visuals have been touched up for a better resolution on Switch. The backgrounds are still cold and foreboding like they were before, but now they’re a little more so everything feels bleaker for Watt and Volt, as they make their bid for freedom. Not to leave just there though, the previous edgy soundtrack that could be a touch too soft at times, with no music supported during off-TV gameplay, Twin Robots: Ultimate Edition now comes with a new soundtrack by Levi Bond that better portrays the events of Twin Robots, which is two robots who must undergo a series of tests to prove they are not yet defunct.

Due to the fact a sequel was considered, new levels started to be developed and found themselves being incorporated into the original game and making it jump from once having 28 levels to endure through, to 40 and some are worth exploring. Secret areas have been added to the game, which are worth finding as not only will they go towards earning some of the new achievements that have been added for this irritation of Twi Robots, but you can also play a little bit of 1 aside football or even get a paint job. (Why be a black or White Chibi-Robo looking robot when you can be a pink or a green one instead?) More than secrets and more levels though, the levels themselves have been improved thanks to the puzzles getting the physics upgrade they needed, with the camera angles being improved also.

Twin Robots Everything Else:

Albeit there was no amiibo support added or Video Capture support, the new changes are a welcome addition as they do help put the Ultimate in Twin Robots: Ultimate Edition, but now we have got what’s new out of the way, it is of course time to talk about what is Twin Robots, how it plays and answer the question “is it worth checking out?” First and foremost, Twin Robots is the story of two robots that are essentially sentenced to death and the only way to prove themselves as still being valuable, they must pass a series of tests, which I said before, but the tests are not easy.

Between them and their freedom, are 40 levels of increasing difficulty and whether you choose to play alone, or with a friend as Twin Robots: Ultimate Edition supports split-screen multiplayer that can make use of the Nintendo Switch’s Pro Controller (the Wii U release didn’t,) the robots must work together in order to survive. In the event you do play with a friend, each player will control a robot, whereas if you play on your own, you will need to play as both robots to advance through the level and switch between the two of them via the press of the Y button. However you opt to play, every level starts the same way, one robot is locked in a cell, about to be crushed and the other must flee their own open cell, locate a big red button and press it.

The act of interacting with the button will unlock the door to the cell of the imprisoned robot can suddenly run free and assist you, but just because they’re out of the frying pan, it doesn’t mean they are out of the fire. Being robots, each one has a certain amount of energy, with the imprisoned one having a life bar that is virtually depleted and his companion having a full one. Using X, energy can be transferred from one to the other, in a bid to restore their life force, but they could always try to go it alone and recover life by traipsing across the blue energy titles that will give a menial amount of energy, with discoverable batteries filling your energy bar to the max.

Be warned though, while you can complete most levels with just the one robot, there will be instances where you will need to share energy between the two, as everything you do from running, jumping, dragging objects and getting hit by certain traps like lasers, will drain your energy, whereas traps like spikes will kill you in the one hit and force you to restart the level from scratch. As for something else that can cause you to restart the level, besides one robot losing all their energy, or being crushed, or messing up a certain puzzle, is getting stuck on certain objects and getting walls, which you can’t seem to free yourself from. While you can get lucky sometimes, more often or not, you will need to restart, which isn’t too bad if the level is one of the smaller and enjoyable ones, but there are some levels in this platforming title that just drag on and get worse the further you’re able to reach.

Aside from near perfect platforming controls that are only let down by something of a delayed jump, the over the top and unnecessarily long-winded levels that try to make up for the bland earlier levels, is the only real issue I have with Twin Robots: Ultimate Edition as even the need to restart a level, all because you reached the end but used up too much energy that you’re unable to open the door at the end of each level, isn’t that much of a nightmare. It is however, a nightmare when you have more than enough energy but there’s a surprise trap by the door that will kill you, when you’re stood unnecessary stood on it/under it, whilst plugged into the awaiting socket, as I found myself meeting my end on two separate levels, whilst doing this, all because I looked away. Still, it’s all part of the fun and I don’t regret a single minute of it as Twin Robots is better than when I experienced it on the Wii U and playing with someone else, only makes it even more enjoyable, plus whether you play docked or undocked, the action is always 60 fps.

By no means is Twin Robots: Ultimate Edition the best platformer game in the world, it has better responsive controls than most other platformers, it excels at being a co-op experience as players can go their separate ways and have the screen follow their actions, but more importantly, it is a great game for aspiring gamers to try out. It is an improved child-friendly title that you can allow your children to play and discover the platformer genre for themselves, or play it with them, as Twin Robots: Ultimate Edition is a game that can be enjoyed by adults also. Also when it releases on February 23, it will be available for the lower price of $6.49 as from the day it releases to March 5, it will be available at an introductory offer for a limited time, so if you do feel the need to check it out, then this weekend and next week is the time to do so.