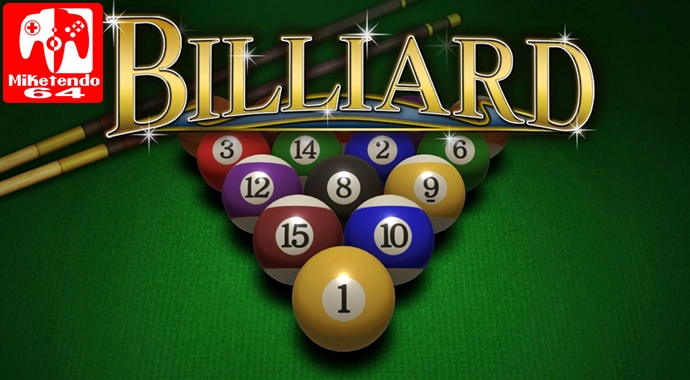 Pool BILLIARD is the second of three pool games released in the month of February for the Nintendo Switch. While it isn’t the flashiest of versions of the venerable rec room mainstay, it is the cheapest, and it does a serviceable job of recreating everyone’s favorite bar pastime with its accurate physics and various game modes.

To address the elephant in the room first, Pool BILLIARD is not a pretty game by any stretch. It has very basic graphics, and it barely meets the standards of even PS2 level amounts of polygon counts. The rendered balls have a smooth look to them, so they handily outdo the first era of 3D-era consoles, but the lack of textures and shadows make everything look a little blurry and incredibly flat. While this might detract a little bit from the overall experience, graphics are not what makes a pool game good, and we can’t expect too much from a budget title. What does make a pool game, good, though, is how well it emulates a real-world experience. While Pool BILLIARD doesn’t offer much in the way of rule sets or the ability to call your shot, it does offer three different get types- eight ball, nine ball, and rotation. I’ll detail each game a little below for those that might be unfamiliar. I won’t cover all of the rules, but provide a quick summary so that one can get the fundamentals down before playing.

In eight ball, each player has an assigned type of ball which they need to sink- solids (1-7), or stripes (9-15). This is determined by which of the two types is sunk first by any given player, with the other player taking the other type. If a player sinks at least one of each type on the break, they can then choose which of the two types they wish to play. In order to win, a player must first pocket each of their type of ball before finally sinking the eight ball. If a player sinks the 8 ball prematurely, they lose. In nine ball, only the 1-9 balls are used, and players take turns sinking the lowest numbered ball in order before sinking the nine ball. As before, if the nine ball is pocketed before the rest, the player loses.

In rotation, all 15 balls are used like in eight ball, but players take turns attempting to pocket the balls in order like nine ball, but may sink other balls out of order as long as the lowest numbered ball is struck first. Each ball has a score value, and it is your goal to have the highest number of points. Each mode offers a tournament mode, but there is little in the way to distinguish between which tournament you’re actually participating in, and so is little more than a title given to what is the same table you play on everywhere else. You can choose to play against the computer, or against a local friend. No online functionality is to be found. Thankfully, you can play two player by either passing one Joy-Con back and forth, or by choosing to have one Joy-Con per player.

The game offers very realistic physics, but that isn’t much of a bragging point since the geometry and engine behind a pool game has been in place for the last thirty years. Pool BILLIARD offers a couple of camera angles to choose from, and it’s nice to help line up shots, but can be jarring when sharing between the two, especially when the game does it automatically when pocketing a ball. Sometimes you miss the travel of the cue ball after a sunk shot, and as such you’ll need to locate it again when going for your next shot. There is a helpful guiding line to be used to assist in your shots, and this can be turned off for each player in the menu to add or subtract from the challenge. This is a nice touch for those more advanced players that wish to go without, but want to leave it on for their younger opponents.

Pool BILLIARD really only shines in that it offers motion controls that help you feel as though you’re really pulling back on a pool cue to execute your shot, but the novelty wears off rather quickly if you play multiple matches in succession. There is an option to use the regular buttons on the fly, so there is no need to hunt around menus to turn it on or off. This was a welcome conclusion when I wanted to switch it up.

There are really a few simple things that could have been done to improve the game. First off, a little bit of style and pizzazz applied to the graphics. Get some textures and shading on the balls and table. Change the color of the felt for different tournament locations, maybe talk on a themed logo. Beyond the possible graphical improvements, an in-game description of the rules of each game would have been a nice touch since I had to Google the rules for rotation. My first playthrough of the game I kept losing my turn and had no idea why. Just a simple splash screen could have made all the difference with that game alone. I understand that pool in general, is a pretty universal game, but rotation isn’t very standard or well known outside of the Asian region of the world. Something that they should have been mindful of when releasing in the west, in my opinion.

In conclusion, Pool BILLIARD isn’t a bad game, but it is the most barebones iteration of its namesake. It’s great for one or two pick up and play games by yourself, and not too bad to bust out at a party, but it gets boring very quickly with its lack of visual variety and flat textures. It isn’t too far off from the Atari days when an instruction manual was standard to explain the basic concept of the game when on-screen text was too much real estate for the cartridge, but it’s 2018 as of the time of this writing, and we have more than enough capability of doing better.