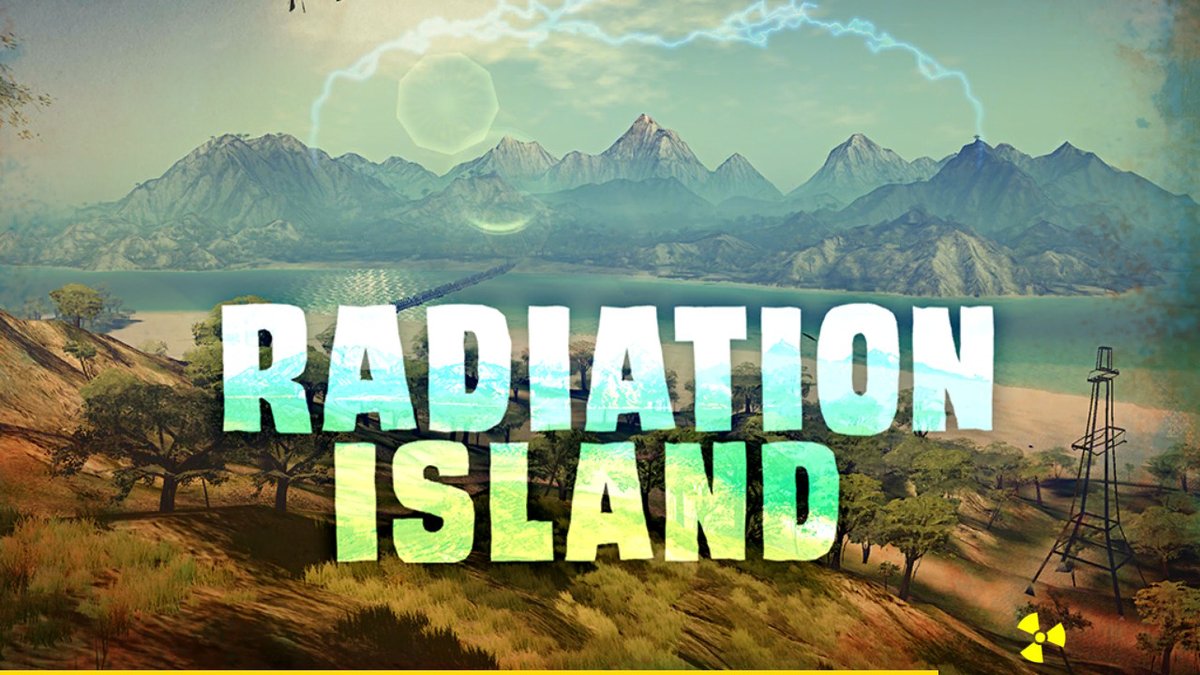 Ever dreamed of living on a beautiful deserted island surrounded by crystal clear waters? An Island full of mystery and wonder that just so happens to also be inhabited by dangerous wild animals and zombies? Radiation Island will test your survival skills to the limit by stacking all odds against you. Can you solve the mystery of the Philadelphia Experiment?

Created by Atypical Games, Radiation Island first released on smart devices and on Windows in November 2016. The survival adventure title combines crafting, exploration and action with an imaginative take on a historical event during World War Two between Japan and America, the Manhattan Project. The original release was successful enough to spawn a sequel; Radiation City. Radiation Island takes place on a chain of four islands that were part of a top-secret military operation known as the Philadelphia Experiment. Before and during the Second World War, both the Japanese and the Americans were fighting for control over the islands of the Pacific Ocean. The Japanese Imperial army seized a chain of these islands and used them as a testing ground for their experimentation into teleportation. The experiments had some serious repercussions and caused a number of animals on the islands to multiply rapidly, villagers to disappear and others to become extremely violent and aggressive.
The protagonist awakes washed up on shore on one of the islands and now the real adventure begins. You have nothing but your bare hands and your brains and you will need to find shelter and scavenge any material you can find. You must explore all of the buildings to find journal pages to help fill you in on what has been happening on the island. Everything points to the ominous Tesla towers scattered over the four islands. Somehow, the protagonist has been transported to a parallel alternate world and must now seek out and shut down all the Tesla towers in the hopes he can return home.
Sun, Sand, Sea and Zombies, what isn’t to love? Though it is no Skyrim, Zelda: Breath of the Wild or Xenoblade Chronicles 2, Radiation Island has a lot of beautiful locations that are wonderfully rendered and well presented. The buildings, animals, objects and game menus are nicely done and easy on the eye. The ominous music keeps you on edge along with the sounds of wild animals and mutated people in the distance to make you regularly doubt whether you are prepared for what’s to come.

When starting the game for the first time, you can choose between 3 difficulty modes, Exploration, Adventure and Survival. Exploration gives you free reign to explore without the danger of being harmed by wild animals or Zombies. Adventure is the standard game mode. Animals and zombies will hurt you and if you die, you will lose the current item you are holding. Survival goes one step further from Adventure, if you die, you will lose all items that you are currently carrying. This mode is for the hardcore gamer that likes a challenge and knows how to be cautious. There are also day and night cycles along with environmental hazards like rain, fog and thunder that ramp up difficulty. It is very unwise to travel at night as predators and Zombies can attack you from nowhere and you won’t even see them coming. You can get around this by finding a shack with a bed or create your own camp bed and sleep until morning.

There are two options of camera view, first-person or third person view. You can alternate between the two by pushing down on the right joystick. For personal preference, I opted for first-person view most of the time as the animations in third-person seem a bit delayed with appropriate sound effect and just don’t look natural either, especially the running/strafing animation. Another unnatural occurrence is seeing rabbits hopping along underwater and tigers running across the seabed as well. I was chased by a relentless tiger at one point and when I ran into the water, to my surprise the Tiger did as well and went straight to the bottom. It seems like this was overlooked in the design as Tigers don’t sink naturally and are very good swimmers. In fact, the AI for all enemies seems a bit clunky as they will usually come at you in a straight line. If there is an obstruction between you and animal or Zombie, they will rarely, if ever go around the obstacle.

Exploration and crafting go hand in hand and you will find yourself constantly scavenging whatever material you can find, be it rocks, wood, wool, animal skins, anything you can get your hands on. You will also find that you will be constantly upgrading your bag so you can carry more materials and still not have enough space as everything is essential to your survival. You can craft tools, weapons, furniture and even a whole house complete with a door and roof. You will be putting in plenty of hours into the game and even though there are plenty of cabins where you can rest your head at amidst the dangers that lurk during both the day and night. There is a feeling of accomplishment when you can build your own shack to call your own.

That’s not all you can craft though as you can also build a canoe and a hang glider to help cross large lakes or if you want to traverse over the landscape by leaping off a mountain and dropping into an abandoned military base. Food and medicine is also essential to your survival as you will need to keep hunger levels at bay or you will lose health. Health can also be depleted by being attacked by wild animals like bears, tigers, wolves and crocodiles. Zombies can be more dangerous and infect you as well. If you don’t have the right medicine you will slowly die. There is also the risk of radiation poisoning in certain areas and if you can drown underwater if you stay down for too long. You can even sustain injuries like severe bleeding and broken bones. All can be cured but you will need to have or craft the right medicines before you succumb to your illnesses and injuries.

Apart from the two instances I mentioned before with the rabbit and the tiger practing their free-diving skills, on terra firma, the animals act as you would expect. Before you can find any proper firearms, you will have to craft your own weapons like a machete, axe, Bow and arrow or spears. when using close range weapons, you will get hurt and risk illness or injury. There is no way of avoiding attacks from animals or Zombies at close range, I have tried and there is little knock-back either. Range weapons are your friends in these instances and depending on your play style, you can choose turn on/off auto-aim. Auto-aim will make sure all your shots are targeted at the enemy but bear in mind that they can’t go through objects to hit them. If there are any obstructions between you and your target, you may just hit the obstruction. When fighting at a distance, you will also be able to dodge range attacks from the enemy if you are quick enough to react.
There are several kinds of Zombies that you will need to be aware of. There are your standard slow moving Zombie that you can usually take down with a few hits from your bow or two with the spear. There are fast moving Zombies that run on all fours. There are some that are armed with weapons and know how to use them and then there are giant variants as well. It is best to fight all of them from a distance so that they can’t infect you, getting up close without proper weapons will normally end in infection and/or death.

Game Controls are better than can be expected for a Mobile game that relied on touchscreen controls. Movement of your character and view are restricted to the left and right Joysticks, and using weapons and objects to the right trigger buttons. You can use touchscreen controls to select items and to navigate through the menus and is more optional than essential, as you can also navigate menus with the joysticks as well. I do find using touchscreen a lot easier when going through the menu screens than I do with the Joystick as there are a lot of different items and settings that can be a little long-winded when navigating manually. One control aspect that I find lacking is the inability to rotate and adjust height for furniture or and building items. If you do make a mistake with placements, you can ‘Destroy’ them by constantly hitting them with your fist (or tool/weapon if you prefer), this will then turn the object in question into a little bag which you can pick up and reuse the object that you have just removed. This only works with what you have crafted and can not be used to destroy houses and other buildings in the game.

When I first heard of Radiation Island, I was intrigued by its appeal. It lives up to its name as an open world adventure game. It uses some elements of Minecraft like building your own shack and decking it out with somewhat limited furniture that only a few things actually have any use. Hunting animals for a source of food and material to make clothing as opposed to just for the fun of it. The exploration of not so “Abandoned” villages and military complexes that are home to a number of remnants of people that have turned into viral abominations. Radiation Island does a lot of things right and is certainly a game to take your time with. Whilst you do have an ultimate goal of shutting down all of the Tesla towers in the hopes you can escape the island, you will most likely find yourself travelling from village to village looking for whatever items you can find including journal entries, to find out exactly what was going on here.

Though certainly not up to par with the likes of Fallout 4 nor does it share a similar play style. You could certainly pick this game up and play it anytime and leave it without any worries of losing progress with its constant auto-save feature. Radiation Island is not a blockbuster but I can certainly see how it is quite popular, enough to spawn a sequel.
It may not have wowed me or left me in awe but it is still a pretty solid title and while, yes you could probably pick it up on PC for $2.99, It is worth noting that Radiation Island was popular partly due to the fact it is mobile on Smart Devices. This is a benefit that the Nintendo Switch has over PC as you can enjoy it both on your TV and in handheld mode. Whilst it is 3 times as much on Nintendo Switch at $9.99, it is still a fraction of a price to other games on the system of the same genre but most of them lack the surprising depth that can be found in Radiation Island.