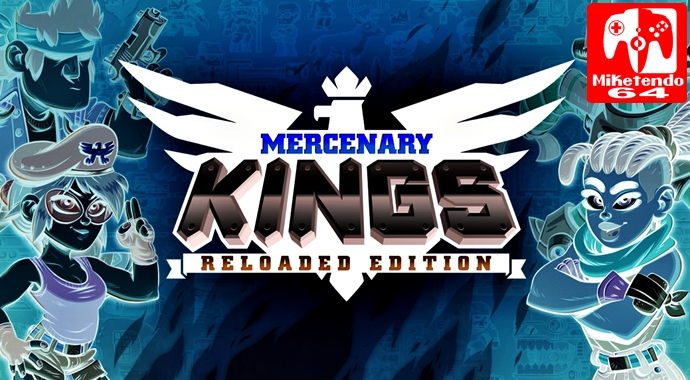 Between games like Mario Kart 8: Deluxe, Pokken DX, and Fast RMX, many developers have been bringing their older games to Switch with enhanced features, and Mercenary Kings: Reloaded Edition seeks to follow this trend. Does it succeed in its quest to revitalize the fun of 90’s run n’ gun gameplay?

In Mercenary Kings, you’ll play as one of 4 characters as you run n’ gun your way through over 100 missions. You always begin at your base of operations, where you can prepare yourself before each mission. Here you can alter your weapons, purchase supplies, join a co-op online game, accept new missions, and more – but where the game really differentiates itself from similar run n’ guns such as Metal Slug is in its weapon customization. Many times, defeated enemies will drop materials that you can retrieve. These materials are used to craft new weapons and modifications for your weapons. There are plenty of different weapon configurations to choose from and each piece of your gun you alter will change quite a bit about how your weapon works. Reload speed, firing speed, accuracy, and more can change drastically depending on the parts chosen.

The game’s action is straight-forward. You can run, jump, duck, roll, and fire as you make your way through missions. Each mission in the game has different requirements, such as rescuing hostages, collecting treasure, defeating all the enemies in an area among others. While the constantly changing mission requirements keep the game from becoming the simple, “keep running right until you get to the end of the stage,” that most other games in the run n’ gun genre are, it’s also one of the game’s greatest weaknesses. You’ll go through the same environments while fighting the exact same enemies multiples times and it gets old rather quick. Sure, you’ll learn the maps and gain a greater understanding of how to traverse the area, but after going through the same place 6 or 7 times you’ll very quickly become bored of it.

Unfortunately, the crafting system only works to worsen this repetition. In order to obtain the materials, you need to create the weapons and mods you want, you’ll have to go through the same areas again to defeat enemies and pick up the materials they drop. This emphasis on farming materials bored me very quickly. I wanted to be running through jungles and secret labs, fighting giant robots and dodging barrages of bullets, not going through the same environments I’d seen time after time to craft a new weapon.

Mercenary Kings also has an online co-op mode which allows you to play through the game’s missions with 3 other players. While playing with friends over the internet this can be lots of fun, but I advise against using the game’s online feature before completing the game’s main story mode. I jumped into an online game with 3 other people and started one of my missions, and immediately the three players ran forward, quickly rushing through the level and completing the main objective in a matter of minutes. I had no time to pick up new materials and the objective was completed without any involvement from myself. This can be a great way to complete missions you’re having trouble on, but unless you want to be left in the dust on every new mission, I recommend not using online until after you complete the story.

Graphically, the game is a stunner. Paul Robertson, known to gamers the world over for his gorgeous pixel art in Scott Pilgrim vs. the World: The Game, does an excellent job here with his trademark lively sprites and backgrounds that bring the game to life. The music is an equally fitting mix of upbeat chiptunes that mesh well with the game’s aesthetic, and I even found myself humming a few of the game’s tunes while I ran and rolled through levels.

Mercenary Kings is a competent run n’ gun that uses crafting and mission requirements to add depth to the genre. Unfortunately, this new-found depth also results in a level of tedium, but not enough to bring down the game’s stronger points.