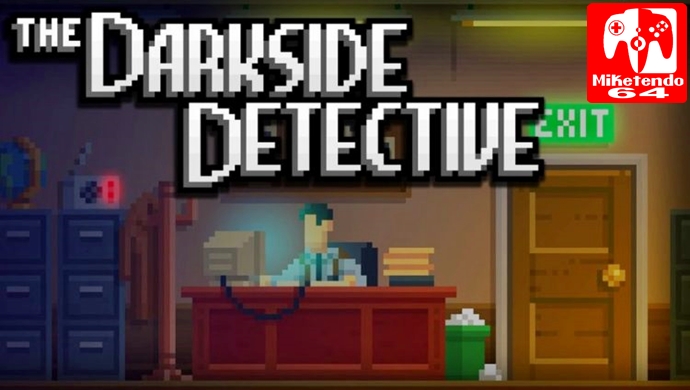 Spooky Adventures await in The Darkside Detective! Do you have what it takes to solve every case?

Enter Twin Lakes City, a city where Spooky mysteries take place and the control of The Darkside Detective Francis McQueen along with his Officer Partner Dooley, are thrust upon you in this point and click pixel art designed extravaganza! But once control is yours, it’s down to you and your team to solve the 6 cases The Darkside Detective has to offer, in a bid to keep the Twin Lakes City safe from the criminals and supernatural forces that lurk in the shadows.

The aim of the game is simple. You’re to search, interrogate people chat with them for clues pertaining to the current mystery you’re looking into, as well as finding out more about the bizarre supernatural events that are seemingly plaguing Twin Lakes City. Being a game of a point and click nature, as you would expect, things such as movement and interaction, is all handled by pointing and clicking in certain direction and on certain items, with the more you click on, helping you in the long run, as more clues means an easier to solve case.

Sometimes though, pointing and clicking is not enough as you will also need to combine items together in a bid to craft something useful that will help propel your progression forwards so that you can solve the case sooner and other times, it’s a case of dragging an item from one side of the screen to the other. I must point out though that sometimes when trying to craft the right item, it is a bit of trial and error, so if nothing goes as you expect it to on the first try, be sure to keep on experimenting for you will soon come across the correct solution for what you need.

Content-wise, The Darkside Detective won’t take up too much of your time, as there are only 6 different story missions/cases, for you to take on, with another one opening up every time you complete one. Short or not, the cases are really enjoyable and often surprised me at the end of each one, but I’m not going to go too much into that, as I’d rather you play the game and experience for yourself, instead of having me spoil something that would have pleasantly surprised you. What I will say though, is the cases will have you go from visiting places like shops and a museum to a whole other dimension. (There are spooky goings on after all.)

With regards to pros and cons, the positives for The Darkside Detective is that as a pixelated game, it does run smoothly. It has a good spooky soundtrack that plays out, whilst on each case and most of all, it has some really unique puzzles and criminal cases to be solved. The absolute best pro though is the fact that The Darkside Detective feels like a perfect fit on the Nintendo Switch due to the portability of the console so anytime and anywhere is the time and place to solve your next big case. As for cons, the only issue I have with the game, is the fact that I’d have liked it to be longer, as the developers did do a great job of lovingly packaging The Darkside Detective and making sure nothing felt randomly placed.

Somewhat surprisingly, The Darkside Detective is a game that did actually really impress me with its pixelated characters, as it was a blast to get to know each and every one of them, what with each of them being in their own weird and funny. There are jokes that are funny, even to those of us that do not speak English as a first language and the dialogue, in general, is done in a way that really makes The Darkside Detective really fun to play, with the spooky soundtrack only making the game all the more better. So, without a single doubt in my mind, although it is short and I’d have liked more content, The Darkside Detective is definitely a game I would say is worth checking out as the developers did a great job with it.