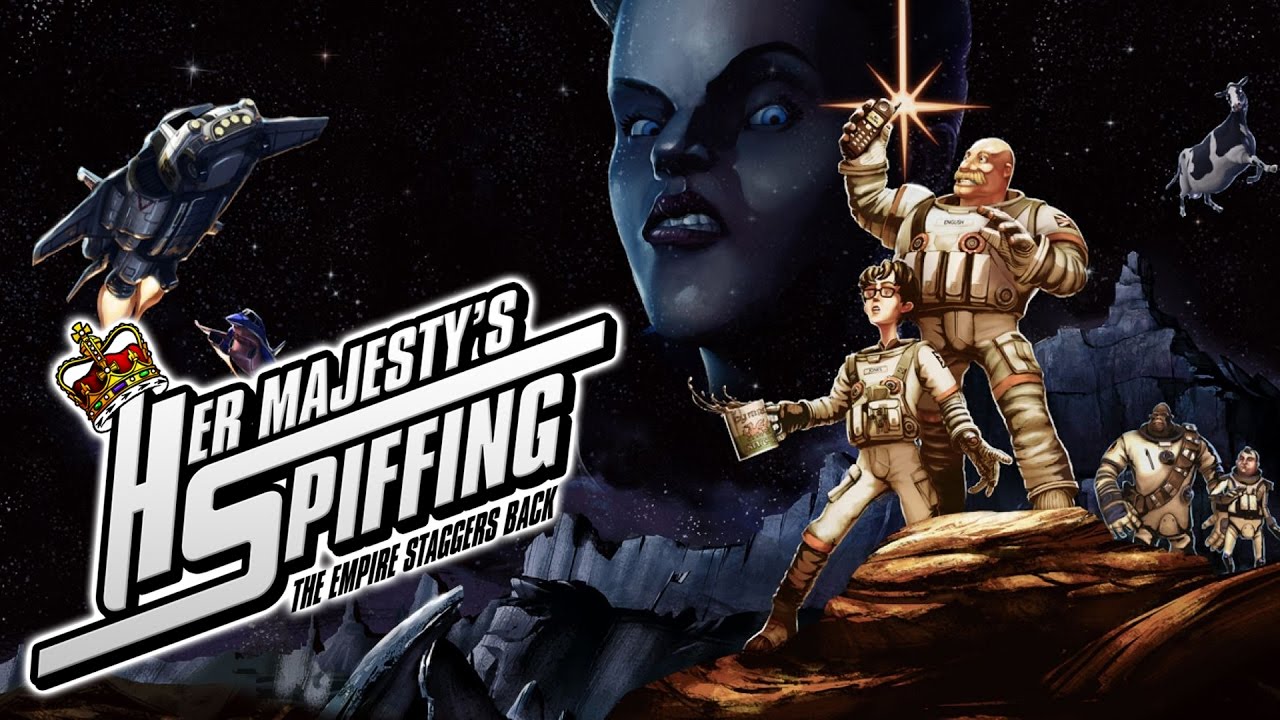 The British Empire has become a laughing stock to the rest of the world. Brexit is a joke and the British Government are running Blighty into the ground. The Queen won’t stand for it though and has sent two of her finest representatives on a mission into outer space in the hopes to begin a new empire in the stars. This is Her Majesty’s Spiffing!
Developed by BillyGoat Entertainment, a game development company from Belfast. Her Majesty’s SPIFFING is a satirical wind up on British stereotypes and tropes, designed as a point and click adventure inspired by the likes of Lucasart’s games from the 1990’s. Though development began long before Britain’s declared exit from the European Union, the development team worked bBrexit into the game in the hopes that it would become known as the “Official Brexit Game” but then worried that the European Audience may find this tone arrogant. After two Kickstarter campaigns, with the first failing to reach its goal. Billy Goat Entertainment managed to get their game off the ground along with the help of the Northern Ireland Screen.
We more or less know the story of Brexit, so where does Her Majesty’s SPIFFING come into all of this? Well, Her Majesty the Queen has had it up to the tip of her crown with the Clowns and jokers working in her government and with the backlash from Brexit, has decided to dissolve the government completely and take back control of Great Britain. With desires to restore the glory of the British Empire, The Queen knows that it will be too difficult to regain the respect of quarter of the planet and has instead decided to explore outer space and create a new Empire of the galaxies. All from her Space Organization SPIFFING Headquarters in Hounslow. SPIFFING stands for “Special Planetary Investigative Force For Inhabiting New Galaxies.”

Her Royal Highness has sent two of her finest astronauts in her stead to colonize a new world in the name of her Majesty and Great Britain, Military Man and Gent Captain Francis Lee English and his subordinate, the Mild Mannered Welshman Aled Jones. Together they pilot the pride of the Queen’s Spacial Fleet, HMSS Imperialise, which is space rocket with a Mini Cooper Front. After being launched into space on the back of Big Ben, English and Jones travel the stars looking for a new planet to lay claim to and plant the Union Jack flag. On the way of their interstellar journey, a number of things start to go awry and it is up to English’s intellect to put them right. With the piloting controls malfunctioning, The investigative Rover needing to be remantled and an all-important tea break, You better be prepared for a Monty Python-esque point and click game because that is exactly what you are getting yourself in for.

Her Majesty’s SPIFFING feels like an animated interactive movie, which is what the idea was originally going to be (well not so much interactive, but definitely an animated short film). The game is as sharp in docked mode as it is in handheld mode and though some animations do feel rather stiff, you can look past that as everything is quite nicely rendered with well done lighting effects. Its 3D cartoon aesthetic adds to its charm and helps accentuate features, much like the caricatures you see in newspapers.. The Ambient music seems much like what you would expect from a sci-fi TV show and everything sounds like it should do like electric sparks or operating machines. The voice acting is notably put on to help accentuate each character. If you remember in Monty Python’s The Holy Grail with when King Arthur quarrels with the French guard, you will find a similar exchange in this game. Her Majesty’s SPIFFING tiptoes on the line between racial and racist with a fine art that it is hard to tell where it really falls.

Unlike most point and click games where you usually manoeuvre a cursor around a room and look for anything to interact with, you take control of the character English and can move him around the surroundings instead. He can interact and observe various objects that you find in the game and provide witty remarks and comments that most British people will get in an instant though may fall slightly off the mark with other audiences. The game has a wry sense of humour that us Brits have the honour of being born with meaning that they can be downright silly and have us in stitches whilst everyone else will look on us as if we have gone mad. We have made it an art form to mock ourselves just as much as we do anyone else and can take a joke or two when directed at our own British silliness.

When navigating around the ship, you will find items both old and new that were created in the British isles and others not so much. Some of these are used to solve puzzles that you will inevitably end up having to solve as you can’t do much else until you have. When you hold A on an object or person, you will bring up a task wheel which will allow you to interact with the object in different ways. You can talk (though this only works with people), you can observe, interact or use an item. All items that you find are puzzle specific and can only be used to solve certain puzzles as opposed to being usable for different puzzles. Some items have to be observed and/or combined as well in order to solve certain puzzles.

Though this game is granted to get a few laughs out of you through its non-stop onslaught of gags, its actual gameplay is rather short. With only about 2-3 hours of gameplay depending on how long it takes to do all the puzzles. They are certainly left wanting more but it has yet to come. With the original release of the game back in 2016 for PS4, Xbox One, PC and Linux, there has yet to be any episodic DLC to continue the story of the game and it does feel like there were some questions left unanswered. Perhaps Billy Goat Entertainment will be looking into them for a sequel but being as though that it has passed well over a year with no news of a second outing for Captain English & Aled Jones, I don’t think we will be seeing what happens next to these intrepid fellows any time soon, but I really hope I am wrong.

For squeaks and giggles alone, Her Majesty’s SPIFFING will certainly tickle your funny bone. Maybe not to the extent of ROFLOLs but you certainly will crack a smile or seven. The problem lies mainly on the lack of replayability. It’s short play time leaves you feeling a little dissatisfied for lack of content and as witty as the gags can be, we don’t play games for jokes, we play games to entertain ourselves. If you do replay this game again and again, the gags will eventually become stale and will lose all entertainment value.

Being a Point and click puzzle adventure, once you know how to do all of the puzzles, repeating them will become a chore further killing the joy and fun. Though not expensive, at about $9.99 on the eShop, you could liken the experience to having a Big Mac Menu at McDonald’s. It will satisfy you for the short while that you are enjoying it but afterwards, you will feel guilty for spending so much on something that didn’t quite fill the hole you were hoping it would.