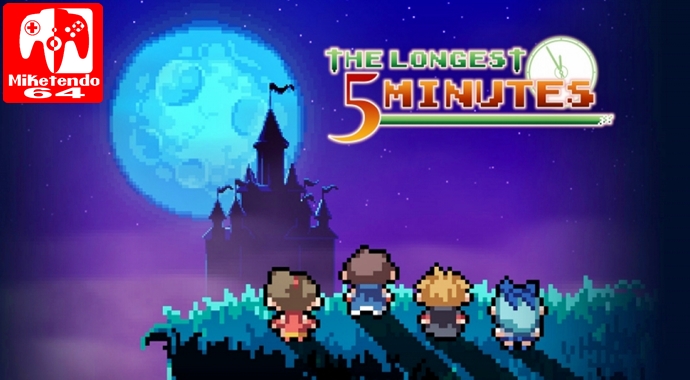 The Longest Five Minutes? Talk about an understatement!

First brought to the West in 2017, to platforms such as Steam and PlayStation Vita, and out on Switch in February 2018, The Longest Five Minutes is a pixel art RPG Visual Novel that tells the story of a Hero, sworn to battle the Demon King. Only, just because game starts with the Hero named Flash…Back (for real, the Hero’s full name is Flash Back,) and his friends, engaging in the most important battle of their lives, and Flash has only gone and misplaced his memories and no, they’re not under the doormat, or in the fridge.

Everything that once mattered to Flash, has vanished from thought completely and he no longer recognises those who are fighting with him, why he is fighting in the first place and Flash has just 5 minutes to remember everything and save the day, or all will be lost. Now, I’ll admit, in the beginning, I was rather hooked on this way of storytelling, as it was interesting to see how even the smallest of dialogue exchanges in the final battle, could trigger a certain memory sequence. Each memory sequence is a playable event that gives you a little piece of the overall story, and although most of them run in succession from one to the other, some memories take place before those you’ll have played already, or way later and then it’s a case of catch up.

As you would expect, each memory does vary in length as some are incredibly short and completed in mere minutes, whereas others can take a full half an hour to play through, or even longer, should you wish to take a detour, engage in a whole load of battles and level up as much as you can. Just don’t concern yourself with trying to make an absolute fortune to buy every item and weapon going, because the reexperience you’ll get from each memory sequence, is all you’ll take with you, since money and items are reset and you must pretty much start from new, every single memory.

With regards to completing the memory sequences, aka RPG Segments, each one has a main objective, such as meeting the King of Stockwood, defeating certain monsters that just so happen to be the minions of the Dark King, or just reaching a particular location. Not every RPG Segments will bring you back to the battle between Flash and the Demon King, but many will and once in the Adventure Segment of the game, you will have to be careful with the things you pick as saying one thing can trigger a very specific memory, such as the one that has Flash join the Demon King, halfway through the game.

Should you make the wrong choice though, and wish to pick something else to say, or just want to revisit a previously completed RPG Segment, you can, thanks to the Memory Album. As well as letting you play previous events, it also stores the memories Flash recovers, but it stores all the details of the missions you’ve completed as well (additional tasks you can complete in each RPG Segment, but they can only be completed within the segment they are introduced in.) Should you choose to replay a previously cleared RPG Segment, it will have no impact on the game’s story and anything that happens during the main battle against the Demon King. However, should you replay an Adventure Segment and choose a different direction, a new path will open up for you to follow instead, such as the path to the evil Flash story arc.

Although the tasks previously mentioned, are not necessary to complete them all unless you want to, as they’re merely a means to get more reexperience points and so are the three different mini-games that are available in-game and if played right, you won’t just earn some point from them, but a lot of points! By far, the easiest of the three games is the Slot Machine, but the shooter game Super Chain Reaction, where you must shoot Prinnies is a lot more fun and then there’s the auto-runner game Haunted Run, but you’ll have to wait until you reach the amusement part before you can try that one out.

With regards to moving and interacting with the world in which The Longest Five Minutes takes place in (a world of three Kingdoms and an evil fog that can turn all people, beasts and objects, into demons,) The Longest Five Minutes is a lot like the early Final Fantasy games we used to get. Everything is top-down, when outside of villages, towns and dungeons, the world is big and you can walk wherever you want, provided as long as there is nothing stopping you from going any further. Holding B will allow you to run faster, with X being used to bring the game’s main menu, where you do things like save your game, load your game and access the Memory Album. Whereas Y will bring up another menu that can be used to check out your inventory, character statuses and things like that, with + being your go-to button for saving suspension points and L being good for bringing up the game’s map. As for A, that’s for interacting with NPC’s to hear what they have to say for themselves and opening treasure chests.

Something else you use the A button for, is the battles. Other than set ones against particular monsters, almost all battles are triggered randomly when out and about on the world map and in dungeons, but they’re nothing special. Instead of being taken away enter a battle stage, the background remains intact and the attacking monsters are positioned nearer to the top of the screen, with a life bar, whereas your team of 4, are front and centre near the bottom of the screen. Battles are turn-based and allow you to organise your team to attack in the manner you wish, be it using offensive magic to harm, defensive magic to heal and cure inflicted status effects, attack, guard, use item, auto attack and even run. You know, the usual stuff.

Each action has an associated animation, but they’re really nothing special, as they are very bland in their delivery, which includes the special techniques. They do look more impressive than other attacks and actions, but the pixel art that was used, did not do them any justice whatsoever. What makes the battles worse though, is half the time they are not even necessary. Most battles and their acquainted areas are so easy that you can easily beat all of them, without having to do any real grinding, to get as much re-experience points as you could require. After all, just because the re-experience points you get, will add to your re-experience level, which is added to your RPG level during the RPG Segments, so you can and will get stronger, the more you play, but it’s only necessary if you will it.

Despite the abysmal battle system, which is a huge con across the board and the story that loses flavour the longer it plays out, something The Longest Five Minutes does right, are its characters. RPG’s always strive to have a band of heroes you can fall in love with, or at least tolerate and for The Longest Five Minutes, it has Regent, Clover and Yuzu. The trio are Flash’s childhood friends and all grew up with him in their home village of Sovereign. Clover Shirotsumekusa is the White Mage of the group, is somewhat shy and just wants to help others. Regent Nightfever is the son of Wizards, who refuses to walk in their footsteps and study magic, as he’d rather rock out and become a bard. He’s also a hot head, who used to be a cry-baby and is often being spoken down to by Yuzu Nanakorobi, a no-nonsense female martial artist who doesn’t back down from a challenge.

Despite starting off strong, nearer to the end, The Longest Five Minutes just felt like it was dragging on a little too much, even when it tried to drastically speed up the story. There are bittersweet moments between Flash and his friends, but as an RPG, the battles and execution of the battle system, is basic and underwhelming for a game that demands $39.99 US dollars, especially when you can pay a bit more to get Disgaea 5 Complete, I am Setsuna, Lost Sphear and Xenoblade Chronicles 2.

One thought on “[Review] The Longest Five Minutes (Nintendo Switch)”