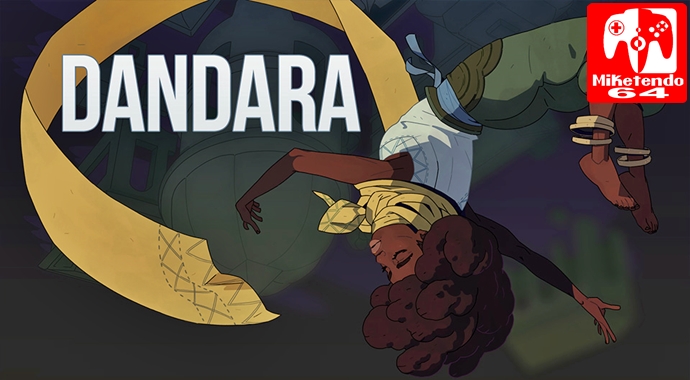 Stand up and free the Sal

While I was in college doing my Video Game Development course, every semester I had an event called SEJA, which was originally a week-long event that become weekend long, in which the school provided us with seminars with some of the members of the industry. In May of 2016, one of this seminars was with João Brant and Lucas Mattos, two guys that are also from Belo Horizonte, and they discussed a little about one game they were making: Dandara. Ever since that seminar, I have been following the game and finally, the Dandara is out. Now, having already finished it, did it live to my expectations?

Dandara is a Metroidvania game developed by Long Hat House, founded by João and Lucas and published by Raw Fury. After a few years of production, the game finally launched on all the current platforms, including the Nintendo Switch, on February, 6th of 2018.

Storywise, this game introduces us to Dandara, the title character that has awoken in a world called Sal, which has fallen into oppression by a group of powerful people and is nearing the brink of oblivion. Her life’s purpose is to fight the tyranny that controls this world and bring the world back to what it used to be and give a new direction to this world. This story is simple, but even without major plot twists and turns, it is worth experiencing, as it gives context to the amazing world that you are put in.

Something you might not realise straight away is that throughout Dandara, it has many references to Brazilian history, locations and famous personalities, which I can’t help but praise them for. For example, the main character is based on a real person called Dandara dos Palmares that during the 17th century fought to end the slavery of her people. Not only that, but you will find places named after common locations in Belo Horizonte and even characters such as Tarsila, whose appearance is based on the famous painting by an artist that gave the character its name. It’s these little things that delight me as far as Dandara is concerned, as they make me appreciate the developer’s efforts to extensively craft the game’s world.

Visually, the game presents a pixel art style that suits the game well and represents everything without leaving a margin for confusion between elements. Every character and enemy design is easily distinguishable, even for those that have a similar design but very different attacks. The same can be said about the animation as it is very well done and allows you to dodge any attack if you pay attention to it. Even the background has some extra animations that react to your position, giving the player the idea that you are in a living and breathing world.

The music in Dandara is fitting to each area’s theme and was delightful to hear, when listened to with headphones on. There are, however, a few areas where the music deters to a different volume level after you beat the boss, or just happens some rough transitions from one song to the next, but these instances are very rare and you will rarely notice them, as they don’t interrupt the game’s flow.

Dandara offers you 2 ways to play the game, although you aren’t explicitly told inside the game: to use the traditional controller in all the modes and to use touch-screen controls when in handheld or tabletop modes.  Using the controller, it is generally simple to control and new mechanics are gradually introduced as you play and just add to your abilities, not overloading you with commands. On the other hand, touch-screen controls were, at first, very difficult to understand, since the tutorials only happen in the start of the game and for the priority controller, which will always be controller over touch controls. For this, I wish I was able to repeat the tutorial at any point in the game, but it isn’t meant to be. After I did some experimentation with the touch controls though, I did finally understand them, which did end up being a pleasant way to play, as the ability to mix both playstyles, is also a very good and valid option, though I will always prefer playing with a controller.

o top it all off, the gameplay revolves around a world that has a gravity bent surface, so you move by jumping from surface to surface in a way that I think no other game has done or focused on, in the same way. A lot of your enemy’s attacks are well implemented on and take advantage of this mechanic to create some a challenge that will eventually need you to have full control over your movements and attacks.

Join that with the Metroidvania genre, and traversing this world is fun, but can create some interesting challenges such as some places that can only be accessed with some special item, unlock or secondary power and/or coming from a specific place. As the secondary powers and special items are unlocked, as in any Metroidvania game, you can access new areas, but, unlike most games, they also change the way you go through some of the areas you already visited, as some items can change some areas or activate traps, which will force you to go through an area you already knew in a different form.

Finally, I have to say that for me, the Switch version is the best of all available. It is the only one that allows you to play with 2 different control schemes, and, in the most recent version, which I, unfortunately, didn’t have a lot of time to play with as the new update came out while I was already writing this review, it introduced HD Rumble and a number of other changes that did, in fact, improve the  game and made it all the more enjoyable when I invested a couple of extra hours into it, to playtest the HD Rumble and a couple of other things. Although, the HD Rumble is good, there is no option to adjust the intensity of the rumble, and/or turn it off altogether, which would be a great addition.

Dandara is a game that deserves to be played whether you know anything about Brazilian culture or not as there aren’t any story barrier, just references. The game’s story isn’t its best element, but it holds up and sets a great world and game that, even if I died a lot in a specific part, I didn’t want to stop playing, because I was having so much fun with its gameplay. So, when I defeated the final boss a little over 12 hours into the game, I still wanted to play more and find everything to complete 100% one of my new favorite games (4% to go). If you want to have fun and like a good Metroidvania, this is one of the games I definitely recommend to you.