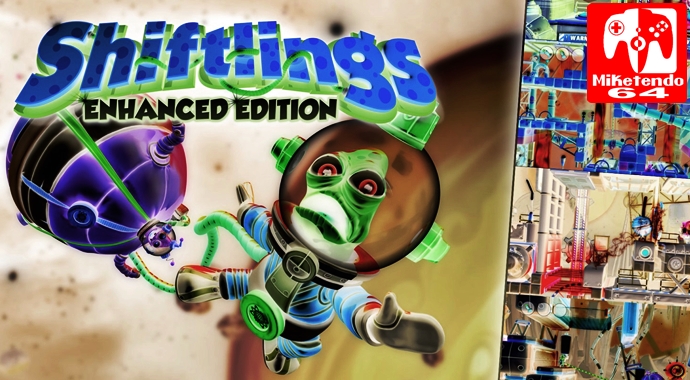 Whether you’re playing on your own or playing with a friend, Shiftings is a galactic delight that comes with a double dose of fun!

Out now on Switch, Shiftlings is a colorful puzzle platformer with a twist! You control two quirky custodians who are tethered together; with one being quite a bit larger than the other one and whether you play alone or with a friend, there are 55 challenging levels for you to play through! Upon your entry to the galaxy Shiftlings is set in, you’re instantly introduced to Zoooookod Neutrino. Zoooookod Neutrino, is a purple coloured humanoid life-from/game show host that introduces you to Shiftlings before sending you to a platform in space, which is where you can start selecting the first 10 levels, present on the first planet of the game, with extra levels being unlocked, if you get enough Cola Bottles.

As far as gameplay goes, like I mentioned earlier, you can choose to play as both characters on your own, or control one of them, whilst a friend, partner or family member controls the other one, which can be done by having 2 separate controllers, or playing with a single Joy-Con each. To clear the levels, using the green and purple Shiftlings players can control, you must either attempt to use them both and solve the puzzles by yourself that are present in each level, or by working with someone else, to solve them. Puzzle solving, more often or not requires you to shift sizes from big to small and vice versa, but it’s solely limited to that as this style of puzzle solving has some variety to the extent that you can become so big that stretched Shifting can be used as a trampoline to go from platform to platform.

Should both Shiftlings make it to the machine with the big red light on it and fix it, (turning the light green,) and stroll over to the opened warp pad, the level is completed and you can move on to the next one, or return to one you’ve played previously as you might notice something you couldn’t before, or just feel like returning to one of your favourite levels, of which you’re likely to have many of. As a game that does have a huge focus on puzzle solving and has 55 levels, the puzzles do get trickier the further you go, as levels soon start adding things like electricity that will kill you in a single hit, causing you to respawn at the last checkpoint, fire and even moving platforms.

Just in case that’s not enough death and hazards for you though, should the tether that binds the Shiftlings breaks, you’ll die and both be sent into space, so try to avoid that as much as you can, but it’s bound to happen eventually. Much like missing a level you need to activate in order to reach the machine at the end of the level. No matter how hard you look when playing, there is always bound to be one level you play, where you’ll miss an all-important level the first time round.

With regards to the sounds and tunes of Shiftlings, they’re upbeat and zany, with the game’s menu having a lively space theme to it, which feels right at home with the allure of Shiftlings and then there are more space tunes that can be encountered to each and every level, with funny sound effects thrown in, here and there, laughable comments by the Shiftlings and celebratory music that will make you feel all warm and fuzzy inside, every time you beat a level!

The levels of Shiftlings feel unique and offer up a different kind of a challenge to the last one, thanks to new traps, or the same traps, just in a different location and immediately feel even better the second you have someone to play with. For me, that is a huge place as even when you’re playing the same level for a second or a third time, it’s still fun and it makes trying to get all the Cola Bottles and 100% completing Shiftlings, all the more appealing. It does, however, suck though that when playing on your own, that the controls for changing sizes and switching between Shiftlings can get a little confusing, but that’s only a small negative that does not in any way, tarnish Shiftlings near perfect status.

Shiftlings: Enhanced Edition, from is comical voice acting throughout thanks to a charming game show host, to a rich character and world design, is a very fun and enigmatic puzzle game that players of all ages can enjoy. Sure, it’s bonkers, but it’s all part of the charm that only further proves that Shiftlings is simply a couch co-op game you need to have on your Nintendo Switch, even if you have no one to play it with!