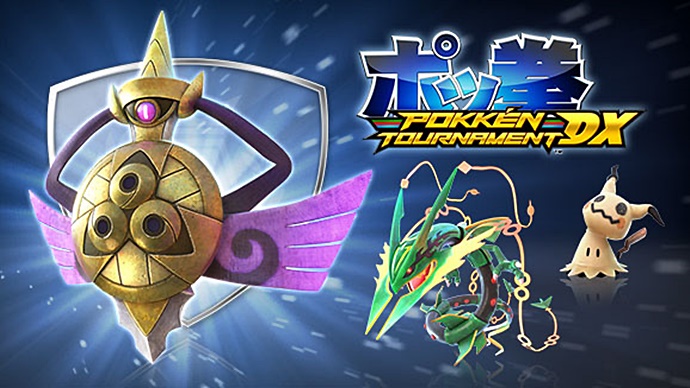 [Feature] Pokken Tournament DX: Battle Pack 1- Is It Worth It?

Pokken Tournament DX for Nintendo Switch has just received its first bout of DLC, bringing a new Battle Pokémon to the roster with an extra set of support Pokémon to help swing the odds to your favour. It also brings new avatar items and an outfit for Nia but we didn’t just pay $15 bucks to play dress up. No, we wanted a new Pokémon to come into the ring and smash merry hell out of another Pokémon. Welcome Aegislash!

If you know all your Pokémon, then lucky you clever clogs! However, if like me, you are an aging dinosaur that can remember the original 151 but your mind gets a bit hazy after that. Aegislash is a Sword Pokémon from Pokémon X/Y and Omega Ruby/Alpha Sapphire (Yeah, to be honest, that still doesn’t explain it to me any better either). In short, they are a giant sword that carries a shield and protects the nobility in the Pokémon series. Well anyway, apparently it is more popular than say, Greninja or any other Pokémon that could have been chosen and had apparently found a gold ticket to enter the Pokken Factory, uh, I mean Tournament.

So, the main question, is he worth paying the $15 dollars just to have a new character? Granted, Blastoise will be making his debut and it certainly is due (Blastoise was my all time favourite Pokémon even today), which makes it about $7.50 per character and well Blastoise certainly is worth that but that is just me. Aegislash on the other hand, has me in two minds as it is not a Pokémon I know of and I am pretty happy with the roster I have already. That said, I decided to bite the bullet and it turns out, Aegislash is quite a powerhouse!

He is not a fast fighter nor a particularly strong one, but when you throw together a barrage of attacks, he can reduce the opponent to shreds (figuratively of course). His Synergy Burst attack encases the opponent in a rock ball and Aegislash comes harrowing down on top of them, splitting the rock ball in half. The support Pokémon are no slouches either. Mimikyu comes with the Play Rough ability, lowering the opponent’s attack and draining their synergy bar. Mega Rayquaza is an ace in the hole that launches a ranged attack that consumes the players Synergy gauge but does damage on the opponent reflective on the level of the Synergy gauge.

For me, now that I have the battle pack, I can’t complain about how Aegislash plays as the Pokémon is pretty badass. Mega Rayquaza is certainly a game changer as a support Pokémon and that does help sweeten the deal. I can’t say “Definitely download it!” as I still think it is pretty pricy for what it brings but if you are more than happy to extend your Pokémon roster then I certainly wouldn’t recommend against it.

Please let us know your thoughts and opinions in the comments below.

*If you would like to know our thoughts on the second Battle Pack that features the Battle Pokémon Blastoise. You check out that Feature here.