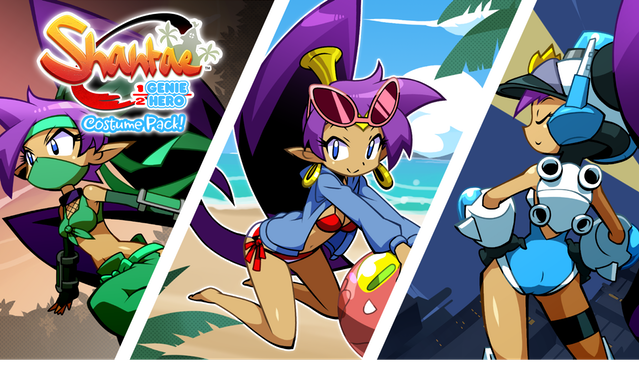 Shantae Developers WayForward have announced on the official Kickstarter page for Shantae: 1/2 Genie Hero that the physical copy of of the game subtitled the “Ultimate Edition” will include DLC that was originally “Backer Exclusive.” This includes the Tinkerbat DLC and the upcoming Costume Mode of Ninja Shantae, Beach Shantae and Officer Shantae.

Here is what the company had to say as regards to making the Backer Exclusive content accessible to everyone after an exclusivity period:

During summer of 2017, we asked Backers to give your thoughts on whether to remove the exclusivity from certain DLC, or to keep it “backer-only”. The majority of Backers who responded via the KS forums and support emails were generally the same, asking us to keep it exclusive for a time, and then release it to the public so that anyone (including Backers who’d shifted consoles) could purchase it again.

In the spirit of that request, we’ve decided to include the “Backer Exclusive” content in Ultimate Edition. By the time Ultimate Edition launches, the Tinkerbat DLC will have been exclusive for nearly a year, and Color Swaps about half of that time. We hope this will make Backers happy, while observing a fair exclusivity period for those who backed at $55 and above. Best of all, now every Backer can enjoy these features!

On the subject of the Costume Pack DLC:

We know what you’re thinking… if “Ultimate Edition” contains the Costume Pack DLC, then the costumes must be getting close, right? That’s correct! Development of Costume Pack is nearly complete, and soon you’ll be playing brand new modes as Ninja Shantae, Beach Shantae, and Officer Shantae!

We will be ready to submit this new DLC content to Sony, Microsoft, Nintendo, and Valve next month, which means you’ll be playing these modes sometime late winter/early spring! As always, this content will be free to Backers, and paid DLC for the general public. We’ll be taking a closer look at Costume Pack next update. See you then!