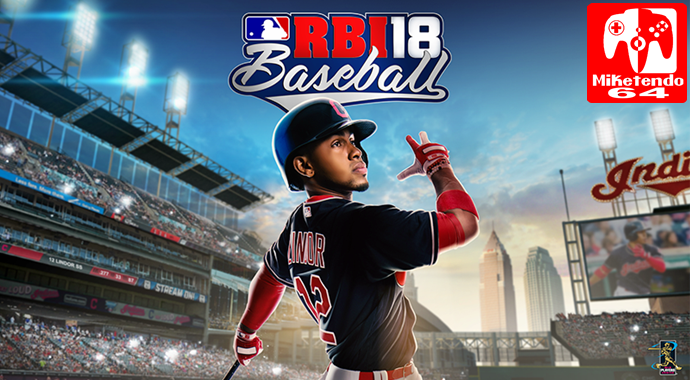 [Press Release] R.B.I. Baseball 18: Launches in March 2018 for Various Platforms & Has Lots of Features for Players to Enjoy

I’m not going to lie to you, I was not a fan of R.B.I Baseball 17, when I experienced it on Switch. It looked and played nowhere near as well as it should have, but a bad experience or not, more baseball action will be swinging its way to us this year and R.B.I Baseball 18 is going to be a lot better and this newly sent out press release is proof as to why:

A SIGN OF SPRING: R.B.I. BASEBALL 18 COMING THIS MARCH:

NEW YORK, January 22, 2018 – R.B.I. Baseball 18, featuring a suite of new game enhancements including Franchise and Home Run Derby modes, will be available for baseball fans worldwide in March. This latest edition of the iconic baseball video game franchise, built exclusively by Major League Baseball for the first time, will be available across next generation consoles, smartphones and tablets.

As unveiled Saturday at Tribe Fest in Cleveland in front of thousands of fans attending the team’s annual winter event, 24-year-old Indians shortstop Francisco Lindor is the cover athlete for R.B.I. Baseball 18.

In his first three MLB seasons, Lindor (“Mr. Smile”) finished second in American League Rookie of the Year voting (2015), led the Indians to their first World Series appearance since 1997 (2016), won a Rawlings Gold Glove Award (2016) and Louisville Silver Slugger Award (2017) and garnered a pair of consecutive top 10 finishes in the AL Most Valuable Player voting (2016, 2017). The switch-hitting shortstop, a native of Puerto Rico, finished 2017 with career highs across nearly every offensive category, including home runs (33) and RBI (89).

In its most significant update since the franchise was returned by Major League Baseball in 2014, R.B.I. Baseball 18 takes significant steps forward for baseball fans of all ages by delivering all-new Franchise mode, Home Run Derby mode, detailed player models, animations, high fidelity MLB ballparks, dynamic camera angles and a stunning UI presentation. These exciting additions have been made with the game staying true to its core identity principles – fast-paced and fun play with easy-to-use controls.

R.B.I. Baseball 18 is officially licensed by MLB and MLBPA. It will be available for the PlayStation®4 computer entertainment system, the Xbox One family of devices including Xbox One X, Nintendo Switch, iPhone, iPad, supported Android smartphones and tablets. The game will retail for $29.99 (U.S.) on the next generation consoles and $6.99 (U.S) on smartphones and tablets. Launch dates for each platform will be available at a later date.

*Feature implementation may vary by platform.