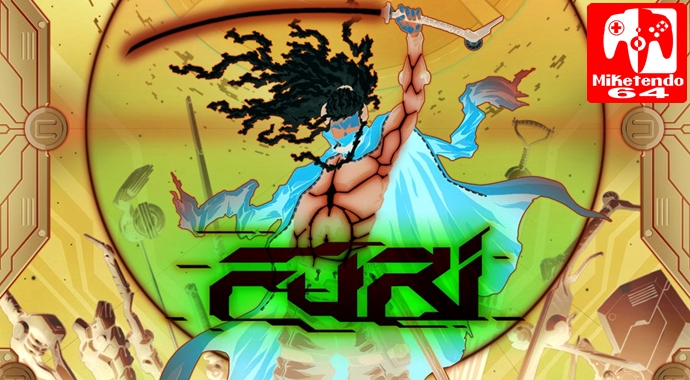 If ever I needed a game to put me in a bad mood, it’s Furi.

I really tried to enjoy this game, for a variety of reasons, but when you review something, you never do it just for you. You can’t. You have to think about every minute as you play a game and how it can appeal to many people in different ways. Otherwise, your words may only be worth reading in the review section of Amazon. This is why I believe Furi tries far too hard to impress, and shatters into a thousand disappointments.

There’s a story which would have been better served as a Netflix movie to watch than having to play through it. But for what its worth, you’re sent to a planet to see if its suitable for its race. The people of this planet know of your character’s intentions so hey build these prisons in order to keep it at bay to report back to its race. Eventually, you are faced with two choices which can decide the future of a race. It’s just a shame that it was in a game, and not a two-hour epic movie that it should have been. Different than before, the below are what I found after playing through Furi. Three different characteristics that would fit well besides its characters of ‘The Stranger’, ‘The Star’ and etc.

It took me two hours to beat the first section. For anyone who wants to play a game for the first time, a blink-and-you’ll-miss-it tutorial on what buttons to press on your first fight is not nearly enough. Between these fights, you are involved in a story, which is definitely more focused on than the game itself, as you’re essentially guiding the character from one scene to the next battle, then rinsing and repeating.

When it does go to the battles, they simply drag because of how the health is managed. You have a health bar alongside two to three reserves. The enemy usually has double what you have. If you empty one health bar of the enemy, you regain your health back to full, which I found odd, as it removes any tension of a challenge. Worse, it’s also the same for the enemy. So if you think you’ve got a chance to win in one moment that disappears once they empty one health bar of yours, and they get theirs back.

Nonsensical, frustrating, and doesn’t motivate you to keep carrying on the battle, which because of this, can easily last a half hour, mashing the same buttons of attack and dodge.

I tried three different controllers just to see whether I was going mad, but I’m sure there’s a delay in pressing a button to when the action occurs. Dodges and attacks just feel dull. When you think you’re about to pick up a certain rhythm in a fight, you lose a significant amount of health, the enemy pummels you with an attack you have no choice in getting hurt by, and you feel frustrated. You end up squeezing the Joy-Con in handheld mode in frustration as to whether its you or the Switch. You wonder if its just you. But even as I’ve passed it to people at work, or housemates, or the girlfriend, I see the same facial expressions as I’m sure I make: Puzzled and annoyed with raised eyebrows throughout.

One of its saving graces here. But only some of the time. When you play a game that’s all about fast-paced action and smart camera angles to keep the player involved in what’s happening, it’s wasted if there’s barely any music to keep you going. Take Devil May Cry; there’s a boss where you fight a panther that has the look of being covered in tar, but it can generate weapons such as daggers from its own body. Throughout this, there’s the music that you remember that motivates you to keep going, no matter how many times you’ve attempted it.

It’s better on its own than how it’s used in the game, and that’s a first for me. I’m aware of the setting the game it tries to be, of how it is a cross between a Japanese film from the 1940’s and Blade Runner, and Alien 3 at times even. But again, it’s another case here of trying too hard and in the wrong places.

As I stated at the start of this review, the story gets in the way of the game itself. You seem like your only function is to button mash through these bosses that offer slight variety, but only as vessels to carry on the story. I finished the game simply feeling frustrated. Frustrated that I had played through an interactive movie, frustrated that there was barely any depth to the attacks and dodges you’re given, and frustrated on how much time I wasted repeating these bosses. Unfortunately, in the end, it’s great to look at, just not to play. Hopefully whatever comes next from ‘The Game Bakers’ leads them to making a good game that isn’t known for just its unforgivable playability.