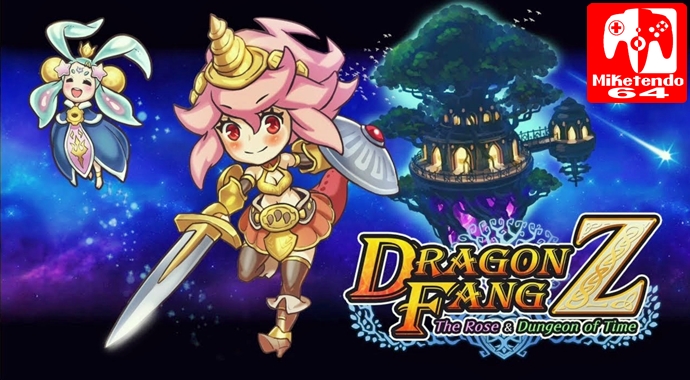 On paper, DragonFang Z: The Rose & Dungeon of Time, a roguelike by the Japan based Toydea that makes use of many RPG elements, does sound like a pretty good idea as a video game. The problem however is in the execution of the idea, because the RPG aspects of DragonFang Z: The Rose & Dungeon of Time are actually pretty good and well thought out, but they never really get to shine, because due to the roguelike aspect of the game, just as soon as you find yourself dressed to the nines and armed well accordingly, you’ll die and lose everything!

Sure you can take up arms once again and try your luck once more, but you will do so from the very beginning, with nothing in your arsenal and while that is to be expected from a roguelike, the more I found myself playing DragonFang Z: The Rose & Dungeon of Time, the more I found myself wishing it was just an RPG game that allowed me to keep everything instead, provided I saved my game. But, that’s enough about that for the minute, so how about we put that that to one side and actually talk about the story. DragonFang Z: The Rose & Dungeon of Time is a game about 2 characters, one who is the daughter, born of a Dragonewt and the other who is a Fairy who accompanies her. The two are great friends, like sisters to one another and often adventure together and one day, things get a little messy, the girl named Rose uses a powerful spell to defeat some enemies and her and Fairy end up in the Tree of Time, which is where their courageous tale can begin.

All Rose and Fairy want to do is make it out alive and reach the Village of the Fairies, but there are 30 levels in which they’ll need to crawl/battle their way through an assortment of monsters and bosses, in the hopes of reaching the fabled Dragon Treasure, which is just so happens the very thing that will see them free at last. Only, they are not the only ones who have find themselves in the Tree of Time and the dungeon it stands over, as there is the likes of the Keeper of the Tree who keeps the tree and can be spoken to whenever in the Tree of Time.

He isn’t the only resident who will call it home either, as there are many other characters capable of giving you some great advice, but getting them to appear in the Tree of Time, is by encountering them whilst advancing through the dungeon. However, whatever they do have to say for yourself, like with everything else that is written/spoken by a character, while the Japanese voice acting is okay and complements the overall 3D isometric aesthetic the game utilises, which is very bright and colourful, the English text the game offers, is nothing short of a localisation disaster. While the words you’ll read are from an English dictionary, sometimes the tense will be the only thing wrong and other times the whole thing would just not make any sense and it is one thing to have certain explanations be a little screwy, but it’s worse when you consider the fact that there is a patch out for the game already that offers better English for any English speaker gamer who wishes to play it, but even the improved text is still faulty.

As for the actual gameplay mechanics and the 30 levels you must play through, once you start exploring, there will be a Dragon Time counter on the top left of the screen. It starts at 500, but every time you move, attack or just act (use a skill, item, or just equip something,) the Dragon Time will deplete by 1 and when it hits 0, for every action you make, you will lose one HP point until you die, but by making it to the next level by finding the staircase on each level and advancing, your Dragon Time counter will refill. Another way to refill it, or even extend it, is to offer up a Mochi’s Fang (you can randomly get them from killing Mochis,) which does come in handy for when your counter is close to 0 and you don’t happen to have any recovery items on you. Although, Dragon Time isn’t the only thing you can expand as your Brave and HP counter can also be expanded, but if you don’t want to offer them up you can of course use them as a skill. Granted they have a charge timer that often requires you to do things like fighting enemies and moving, but when they work, they can turn the tide of battle in your favour.

Something else that can greatly assist you are arrows that you can fire with your bow by pressing the L button, but good luck finding them, because with DragonFang Z: The Rose & Dungeon of Time being a roguelike, every time you go into the dungeon, the layout, the available items and the encounterable enemies will be different from your last playthrough, so where you could have found arrows three levels in a row, in your current run, you could go through 9 levels and find nothing. (Not even a sword, or a shield, or even a decent staff that can render status affects, which means you’re left to resorting to punching everyone and everything you see.)

Not every playthrough will go the way you want it, and defeating every enemy you fight to level up may help boost your stats, but when you die, it’s back to level 1 with you and your base stats are restored, so while it does help to be as much of a badass as you can, you will most likely die before reaching the final level, so if you happen to have a specific box item in your inventory, storing items in it, such as your better ones will allow them to appear in the Warehouse, which is something you can access when outside of the dungeon, so you can take what you need before you go back in.

But if you are interested in not dying, if you enter a Monsters Lair, run like mad, until you can find a place you can take on the monsters one at a time, always take down a Golem’s soul before it can evolve a monster into a far deadlier form, or just summon one to the map, always keep on top of your items and make each movement count. Enemies can attack you from every angle and unless there is something blocking your path, you can actually move diagonally for a more direct passage if you need it and trust me, diagonally is a good way to move as not only can it save your behind whilst playing through the main dungeon, but there’s also a secondary mode available via the Tree of Time, where challenges can be played one at a time (of which there are 50,) and some of them require diagonal movements just to best them. Diagonal movements can also help you side-step traps you’ve previously triggered that can cause you to drop items, transfer to another area of the map on the same level or lose a lot of HP because it’s a mine and they are an absolute bugger when you tread on them. Sure, you can regenerate the health you lose with enough movements, but if there’s enemies on the scene, there is nothing better than full health because to face a powerful enemy with enemy less, is just asking for a game over and talking of things being over, it’s time to do the same with this review.

Despite having the makings for what could have been a pretty great RPG to play on the go at any time on your Switch, Toydea ruined DragonFang Z: The Rose & Dungeon of Time, by trying to be clever and make it double as a turn-based RPG. It looks great, plays pretty great, but the concept and the overall poor English do it no favours at all. Not enough to make DragonFang Z: The Rose & Dungeon of Time a complete write-off, but enough to make this writer think about the game we could have got, instead of the one we did have and that is not a good thought to ever have in your head, when playing a video game.