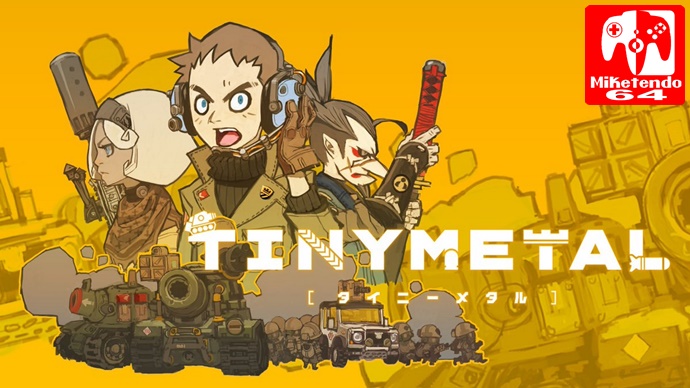 Since Advance Wars has not had an installment for 10 or so years, a new contender has come to pick up the gauntlet. Get ready to manufacture machines of war and send them to the front lines as it is time for us to review Tiny Metal.

Developed by Area35, Tiny Metal is a Turn-Based Strategy game that puts you in the shoes of Lieutenant Nathan Gries, an officer in the Artemesian Military, who must use every resource available to win the war against the Zipang Nation. The game was helped funded by Kickstarter and though it didn’t meet its funding goals, Development went ahead anyway and was able to pick up investors later down the line including funding from Sony themselves. December 21st 2017 has finally arrived and with it has brought Tiny Metal to the Nintendo Switch, PS4 and Steam. It has had a troubled past and now we must put it through its paces to see whether it is a worthy title or not to have on the Switch console.

After the King of Artemesia has been killed in a plane crash and the Zipang nation to blame. Artemesia declares war on the Zipangese and sends their military to invade Zipang. Leading the invasion is hotshot Lieutenant Nathan Gries, though inexperienced, he shows promise as a leader with noble intentions. As you advance, you will join up with unlikely allies “The White Fang,” a mercenary faction that fights for profit providing the cause is just. Their Leader, Wolfram eventually agrees to aid you in your invasion though her reasons for doing so are not divulged. With every step leading ever deeper into enemy territory, Nathan begins to discover that his beloved homeland and its government is not as peaceful and squeaky clean as it’s image portrays.

Tiny Metal has you look down on the battlefield from an isometric view which allows you to see units and buildings from the side as much as from above, giving more depth to each unit, building and terrain that you will find in the game much like the Command & Conquer series. The game is bright and colorful and favors the fanciful as opposed to realism, so if you are hoping for bloodshed you won’t find it here. Graphically, the game runs comfortably at 30fps in 1080p in both TV mode and undocked. I found it just as comfortable to play it in handheld mode as I did on the big screen. Units are easily distinguishable and each faction is color coded so you know which units are yours and which are the enemies. There are instances where the frame rate drops significantly but it is not the end of the world, I have yet to have it become a problem though other people have experienced game crashing sometimes.
The music to the game is upbeat, funky and fun and does a much better job of keeping you entertained than the voice acting does. The main story narrative has Japanese voice acting with English subtitles. I must admit that though I don’t speak Japanese, it can come across as a little forced and overly aggressive. The English voice acting is another kettle of fish. This is found in the gameplay action sequences and sports pop culture references and phrases. The most common is the “Wham! Bam! Thank You Ma’am!” that you will hear every time you put your Metals (tanks) to work on the enemy. It is mildly humourous to begin with but every single time you go attack an enemy, it really gets old fast. Fortunately, you can turn off your unit’s call outs but that does mute all of your units so there will be no more Scottish jeers or Australian quips along with all the other mish mash of accents you will hear.

Being a turn-based strategy game. You take it in turns (duh!) to move your units across the battlefield. Each unit is restricted to how many spaces it can move and what actions it can do when it reaches its destination. Scout vehicles can move further than Metals but don’t have the same fire power. Infantry can attack other infantry and most ground units but are useless against metals. This doesn’t make them obsolete though as they are essential for capturing buildings which generates revenue that can be used to create more units to aid in battle. Much like a game of chess, patience is key and sacrificing units is sometimes necessary in order to follow up with a counter-attack that will ultimately guarantee you success.

There are 15 different units to choose from and all have their own strengths and weaknesses. There are Radar Trucks to help pinpoint enemy units hiding in the fog of war and Strikers that fire land-air missiles to hit enemies within range. A choice of 5 hero units can also be deployed after reaching a comms base and can be deployed anywhere you have visibility. They are much stronger versions of their standard variant and possess extra attack and defense. Your options of attack isn’t just limited to land base skirmishes as you can also manufacture air units as well. They are unhindered by land obstacles and can fly directly over sand and water tiles. This doesn’t mean however, that they can occupy the same space as other units though but they can survey your surroundings and open up the fog of war to allow you to see where your enemies may be hiding.

There are three games modes, two of which are available straight away, while the third will be patched in at a later date. There is the Campaign mode which, is the story mode and will also teach you the basics of the game and introduce you to all of the units and actions you can do gradually. Skirmish is an assortment of maps, both small and large and can host 2-4 different warring factions at a time. The last option is of course multiplayer. Area 35 have promised that it is coming and will be available at a later date.

It must be noted that this game has definitely got it’s fair share of issues and are certainly worth addressing. Straight from the get-go, you are welcome with a pretty cool cinematic what shows the kind of units that you will be using facing off against each other. It is interesting to watch the first few times but it is not skippable and is 3 minutes of your time that you could spend actually playing the game. The narration which I touched on earlier is agonizingly long and even with the fast forward option, it can still take a long while to get into the game. It is a shame because the game is promising but its story is one that we have heard many times before, one faction against another faction, with twists and turns and tales of betrayal. There is a lot of conversation but lack of any real character development which makes it difficult to relate to them. Though Tiny Metal is said to be “All about Gameplay.” It’s in between story scenes seem to hinder the flow of gameplay and by not being able to skip the sequences altogether. I personally feel bad that I am missing out on the story of the game but I actually do want to play the game as opposed to listening to hours of dialogue that don’t really do much for the overall experience of the game.

When I started playing this game, I did not like it at all, The narrative was unnecessarily long-winded. I did not care for the gameplay nor was I a fan of the silly English phrases of each unit. As I continued playing for the sake of this review though, I eventually grew to enjoy it. I looked past its comical facade and saw that the gameplay was actually quite a deep experience. I began to enjoy the game and started to understand it’s mechanics. Unfortunately though, just as I was allowing myself to enjoy Tiny Metal, my research into its development revealed a couple of things I am not too happy with.

However, Tiny Metal as a game has plenty of promise but if you are hoping it will fill that big gaping Advance Wars shaped hole in your heart, you may be sorely disappointed. Coupled with the fact that Tiny Metal is $24.99, it is definitely going to leave a bitter after taste. I would personally wait until the Multiplayer mode is added and the price has dropped somewhat before dipping into this game.