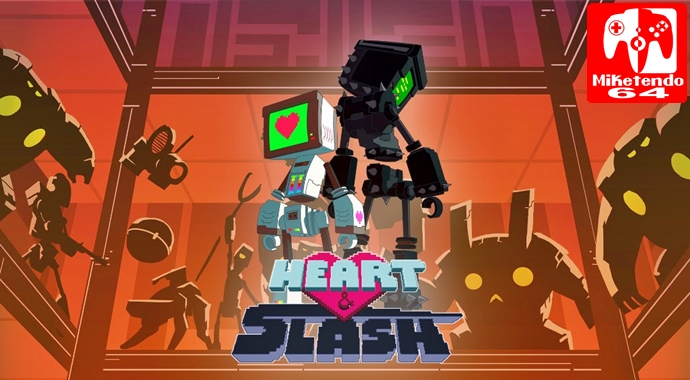 Have you ever wanted to play a game that pits robots battling it out in a roguelike capacity? And I’m not talking old school fighting robots like with Rock’em Sock’em robots, but more like the robots from Robot Wars, given legs and arms and able to battle and duel in a 3D brawler capacity? Well, developed by aheartfulofgames and published by  BadLand Games, Heart&Slash is a game that is almost like what I’ve described, except while being a beat ‘em up, it’s also a roguelike and while I have become a fan of roguelikes, I think that particular genre is something Heart&Slash, could have done without.

I went into the game, wanting to love it, as the cartoon show like graphics was something that appealed to me, but the longer I found myself playing Heart&Slash, the more I started to realise that Heart&Slash is not the big contender I had hoped it would be. Sure as a roguelike, there are plenty of things to see and collect, such as 75 different weapons to be collected and wielded, 60 different robot parts, 71 missions to be completed and 93 different kind of enemies, including bosses. There’s also various levels that are short and intense that are never the same, thanks to them being randomly generated. The only thing is though, because it is a roguelike and there is no easy setting, you can easily spend two hours just playing the first level, over and over because dying is easy and all the opposing defective robots, just can’t wait to tear your little Heart named robot apart and see if you bleed. (He won’t because he’s a robot, but clearly some of the opposing robots have seen Batman vs Superman: Dawn of Justice, or at least the developers have.)

As for the story of the game, well there’s a robolution and humanity is wiped out, but if you play the game’s tutorial, then you get to see some of the events that happened 100 years previously, during the time when a Dr. Sympathio and his assistant, was making sentient robots and seeing how they could handle themselves in battle. Dr. Sympathio teaches his latest creation how to fight, with the Y button acting as a quick attack and X being used for a strong attack. A can be used to evade, with B being used for jumps and double jumps. Near the end of the tutorial, while things were going fine, right up until QuAsSy (Quality Assurance Systems,) rebels and the end of humanity begins.

When you start playing the game for real though, 100 years after the robolution, Heart, which is 1 of 6 playable characters, wakes up in a factory, which immediately he is told to escape from, by none other than Dr. Sympathio, who can speak to the player via computers all over the various levels and instructs you to level up your equipment and your life, whenever possible and can even provide you with things. Things being weapons and items, that can be stored in any of your three slots (items in the left slot require you to hold ZL and press Y or X to use them, with items in the right slot requires ZR and Y or X.) The thing about Dr. Sympathio though, is he isn’t all that helpful as he really doesn’t appear all that often, so pretty much most of the time you’re on your own, so do yourself a favour and try to remember the tips you’ll be greeted with during the loading screens as I found them to more helpful than Dr. Sympathio.

Now, since I only momentarily touched on levelling up, let’s amend that. Levelling up your equipment, or upgrading, is done by fighting and killing defective robots. Defeating them will earn you bolts and when you get enough bolts that you get a whole box of them, you can use it to level up something you wish, such as upgrading a weapon or an ability like gimmick that could be a jet-pack you strap on your back, the means to stop time or even teleport. Only, a lot of the weapons and that you can acquire during the first few hours of gameplay are pretty much abysmal, so it’s really not worth wasting time levelling up something you don’t use or don’t like, as recycling items can restore hearts and if you have full life, recycling can also give you new hearts. Should you not use the bolts though, they will actually carry over to your next play through, so you can save them up to try and better your chances in a far off playthough that might just see you beat a couple of levels before succumbing to call of death once again.

But defeating enemies is not easy, as almost every room you can enter can be packed with relentless projectile firing enemies and the action is so fast that it can be quite hard to keep up with them all, so speedy reactions are a must! Regular reactions may be enough to see you take down the usual suspects, but Slash, a robot who has it in for you and you will encounter on many instances, will hold nothing back. Slash is an assassin and how you treat every encounter is important because they will define the relationship the two of you will have and how the game will ultimately end, but you might not make it that far. Not because the game is too hard, but because Heart&Slash is a little too buggy for my likely. From crashing as soon as I die, to the software closing unexpectedly on 7 different instances, by no means is Heart&Slash a game with a great performance as there are even frame rate drops that typically occur every time there are more than 4 characters on screen when docked and undocked Now, I’m not usually one to let performance issues put me off a game, as I do like to see the game I’m  playing all the way through to the end, but for me they proved a tad too much and it was time to bring the Heart&Slash experience to a close.

Despite a great aesthetic, interesting genre blend and plenty to do, Heart&Slash just isn’t the game we were first led to believe it was and the unexpected game crashing is a total nightmare. It’s one thing to have it crash on you when you’re on the first level, but on the third is worse, because 8 out of 10 runs you might not even make it that far. So in my opinion, Heart&Slash is not a game I can just recommend because it is not one of the better brawlers or roguelike games you can play on Switch, it’s just one of the more adorable ones and it shows throughout from its speedy, yet twitchy action, odd camera angles and the performance issues I’ve mentioned before.