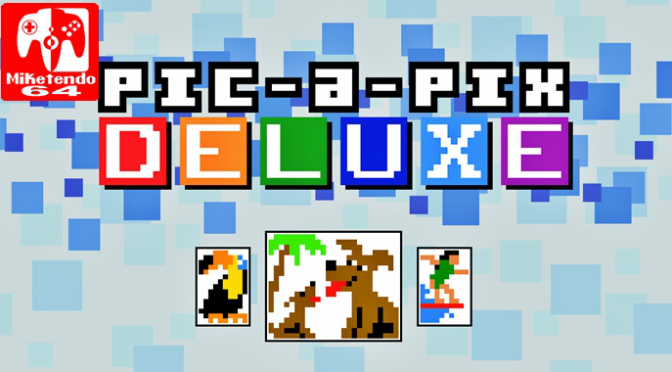 Pixel Puzzle games have been quintessential to the video games industry for quite some time. While they seem simple, they quickly become complex and have you sitting and thinking about how to solve each new puzzle. What was newspaper crossword puzzles to our grandparents, the new generation enjoy pixel puzzles for their brain teasers. We may not be the best with quizzical words, but we do great with video game type puzzles and brain teasers.

I have been a fan of pixel puzzle games and puzzle game in general for the majority of my life. It is a casual play game that also keeps you engaged and tickles your brain (which I hear helps keep your brain young!) I was eager to sit down and play Pic-a-Pix Deluxe and experience the same enjoyment that I have experienced in previous iterations of this theme. While these games seem fairly simplistic, they are actually quite complicated and can take you a bit of time to solve each puzzle.

I played through quite a few levels of the game, both in their color and black and white games…and honestly? I quickly grew bored of the game. There are many, many iterations of this game, and to be frank, this seemed like a poor regurgitation of the “standard match this color with this number and create an image,” formula. Maybe I’ve been spoiled by the other versions of this game, but I didn’t want just an image…I wanted more of a cool little pixelized piece of art.

With Picross and Piczle Lines DX already on Nintendo Switch, Pic-a-Pix Deluxe doesn’t feel deluxe at all. Solving the images had your standard formula and did present a challenge, but once you solved the puzzle…the image at times was confusing. When I solved the Strawberry and Cat levels, I could barely tell that it was a strawberry or a cat which really left me crestfallen. The whole game feels like being a kid and playing in MS Paint to try to make a picture. Harsh? Probably, yet that’s just the way that it felt to me. Overall, the aesthetics remind me of a draft of a game, not a completed and beautiful game. The colors are about as basic as can be found in a 24 Pack of Crayola markers.

As the images become larger and more complex, the images do become clearer as to what they are depicting…however it is still extremely simplistic and doesn’t leave you with that sense of “wow” after completing the puzzle. When I completed a puzzle and it revealed what it was, I was just kind of left with a sense of, “Oh…okay…”. I was expecting more…oomph from the game. Something to set it apart. Something to make me want THIS over the other pixel puzzle games.

My other disappointment with the game is that it feels like a poor ripoff of the popular Picross which has been available on Nintendo Switch since late September. Picross and other similarly themed games seem to have more detailed images that give you a sense of satisfaction that by completing the puzzle you create this killer pixelated piece of art.

Pic-a-Pix Deluxe does have some neat features, though. Boasting 300 Puzzles (150 color and 150 Black & White), you can also play in co-op with 2-4 players. With introductory puzzles starting on 5×5 grids, they get up to and as complex as 35×25 grids. It’s nice to see a variety in grid sizes and complexity, just wish it could have kept my interest a bit longer.

While the game does stick to your standard formula for pixel puzzle games, it would have been nice to see something innovative; a new way to play, a different type of challenge, something to give me a reason to purchase this game over Picross.

Pic-a-Pix Deluxe, while somewhat fun, was a real disappointment in terms of pixel puzzle games. With Picross and Piczle Lines DX having already been released and each bring their own unique playability, Pic-a-Pix Deluxe feels like a simple puzzle game from another time. 10 years ago, maybe, this game would have been exciting…but frankly, there are much better options already available from the eShop.

I am a 29 year old Queer Parent. I have one birth son from a previous relationship and my partner has 3 children from a previous relationship, and together we make a bomb ass blended family. With 2 cats and a dog who we are currently training to be an Emotional Support Dog for our 7 year old daughter (and hell, the rest of the family at that), life can get pretty chaotic. I am GenderQueer. While I lean more to the masculine side, I identify as both male and female. I work as a Domestic Violence Advocate, and in my spare time when I'm not being run over by small children, I enjoy photography as a hobby.