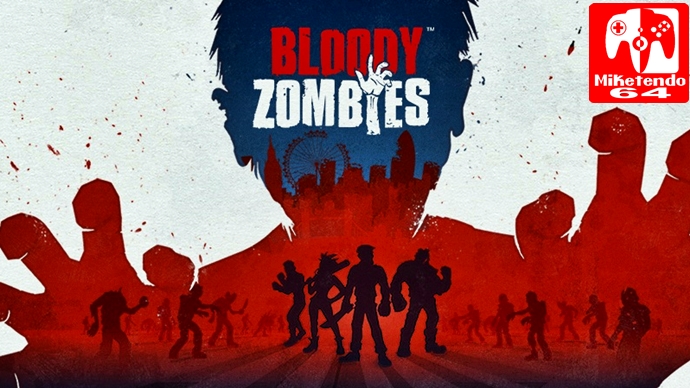 The Walking Dead it is not!

If you are a fan of brawlers and the more recently released Phantom Breaker: Battle Grounds Overdrive, was not to your liking, but Wulverblade is, then do we have some good news for you. With designs by Steven Knapman and developed by Paw Print Games, Bloody Zombies! is as you may be able to guess, a brawler about some Bloody Zombies and I freaking hate zombies.

Once upon a time I would watch a zombie film and all would be fine, because there weren’t that many zombies and nobody was really obsessed with them, but now they are just everywhere. From comic books to Zombie Samurai flavoured Taki crisps, the whole world has gone zombie mad and zombies just don’t do it for me. I’m not usually a fan of video games that they appear in or TV shows as I actually despise both The Walking Dead and Fear the Walking Dead, as I find them both so tediously boring. Yet, despite my disdain for zombies, it has fallen upon me to carry out our review of Bloody Zombies! and I shall do it without any prejudice, so let’s do this!

First and foremost, Bloody Zombies is a co-op brawler that like the Ubisoft developed Zombie U, is a zombie focused game set in the city of London. Overrun with mutated zombies that come in all shapes, sizes and variants (more than 30,) Bloody Zombie is a hand-drawn game that tells the story of four outcast/loner survivors living in the zombie infested city, who must work together in a bid to end the plague. With such a daunting task ahead of them and 11 levels that boast more than 20 different levels as one level can see you start at a construction site, but end up at a night club, where you must destroy speakers to stop additional zombies being attracted to your position, the mission to take back their city will not be easy, even when playing through easy mode.

The good news though, is with Bloody Zombies! being a game you can play with others, you, like the survivors, stand a better chance of survival when working together, provided of course you have someone else to play with. If you don’t, then it’s just you and no, you’re not on your own, because there are plenty of zombies all too happy to keep you company, while they eat your brains out! But even if you don’t have an actual friend willing to play with you, Bloody Zombies! does have local and online support, so as long as there is someone out there who has Bloody Zombies! on Switch and is online at the same time as you are, you don’t have to go it alone.

With regards to the anti-heroes of Bloody Zombies!, they are Rei, Eddie, Mick “The Brick” and Teller. Each character has their own distinctive British accent, complete with one-liners that vary from one another and a slightly different fighting style, but don’t worry, the combat is not that bad. Thanks to freeform combat and usable skills, players can combine moves and skills to create their own “brutal, endlessly chainable combos” and really lay waste to the zombie scum that just won’t leave you alone. Still, just because the skills can be used to deal devastating damage, they do have a limit as using them drains your Energy meter and although it can be recharged by picking up (Hold A) items that restore energy, it is never a good idea to waste energy on an easy to defeat zombie, when there are others that have special abilities, throw stuff at all, or are much bigger and can really take a pounding. (You can try standing in one spot, beating the crap out of them, but odds are they will knock you flat on your arse and cause your combo meter to revert back to 0, so if a hit is coming your way, don’t be afraid to use ZL and press it with a directional right or left button, to perform a successful dodge.)

Should you fail to clear a level in a single life, then worry not. You do not need to beat a level in the one life, unless playing the Insane Difficulty where one is all you get, you can have a selection of six, with the option of getting more, should you scour the secret areas of each location and inspect every crate you see. (It pays to look around you know!) Even better than that though, depending on the difficulty mode you’re playing, the lives you have are not for the whole game, but per level, so if you complete a level with just the one life remaining, when you start the next one, your lives will return to 6 and upon falling in battle, you will respawn exactly where you fell. Also, should you tire of the character you chose to play as, by quitting to the menu, you can load up your save file and play as another character if that is what you desire.

Now for my tastes, I found the movement to be a little slow, with the action even slower, but then what do you expect, when it is a brawler, not a runner and your movements consist of more than just right and left as there is also up, down, and lots of secret areas to discover and treasures and items and power-ups to pick up to strengthen your skills and earn even more points. The soundtrack on the other hand, is actually pretty good and does go hand in hand with the action, although I’d be lying if I said I didn’t mute the game on some occasions, just so I could listen to the edgier songs I have on my Sony, but zombie focused or not, for what it is, Bloody Zombies! is actually a pretty good game!

If Zombi U and Wulverblade had a baby, I’m pretty sure that offspring would be something like Bloody Zombies! It’s not necessarily great as the action isn’t as smooth or fast as I would have liked, but Bloody Zombies! is good and it’s even better when played with a friend. Plus, you know, it is a game that does let you give zombies a bloody good kicking. It is odd however that this game sees release just days before Christmas though, as the timing feels wrong, but hey, there’s zombies that need killing and it’s that time of year where we have time to spare, so crack those knuckles and let’s get fighting! The zombies want to eat our brains and the heroes of Bloody Zombies! just want to bash their skulls in.