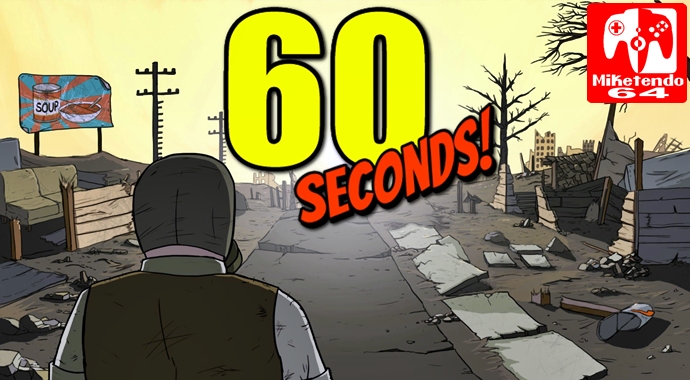 Preparing for the end is only the beginning!

Where there is life, there is death and where there is disaster, there is survival and now thanks to Robot Gentleman, such a game that plays on these facts of life, is now available on Nintendo Switch. 60 Seconds! might not be in the same league as The Flame in the Flood, but it is still a game packed with dark comedy that is all about surviving a nuclear disaster as communist Russia takes to bombing 1950’s America.

Upon doing some preliminary research, the comic book looking 60 Seconds! did come across as being a game I would actually enjoy, but having spent the last couple of days with it, this was not the case, as I feel 60 Seconds! has lots of good ideas at play, but some of them were just so purely executed that they actually let the game down. In the spirit of doing a proper review though, 60 Seconds! is a game with a title worth talking about. You see, 60 Seconds! is something of a two-fold game, depending on what mode you’re playing. In the first stage, you play as Ted, the head of his household, who has just 60 seconds to gather all the supplies he can grab and family members, and usher them into the cellar.

Depending on what difficulty you’re playing on and which game mode, you can have some extra seconds before the 60 start, so as to walk around your house, (the layout of which changes every time you play,) and plan out how you’ll spend the 60 seconds. Now, I don’t dislike the fact that Ted can only hold so many items, as that is reasonable, but what I don’t like is how useless his family is. Yes, they can be effective in the second stage of the game, but in the first part where it is all about gathering supplies in which to survive the ensuing fallout, they are as useful as a chocolate teapot. There you are, father Ted (but not a priest like in the TV show,) doing your fatherly duties and seeing your family to safety and they’re just doing nothing. Your wife Dolores is standing around, daughter Mary Jane is playing her tuba and son Timmy is drawing, as neither one of them can even be bothered to give you a hand and grab a single bottle of water or tin of soup, each. (Talk about being ungrateful!)

Just trying to see them to safety and grabbing the visit items like food, water, a rifle, an axe, a gas mask, a radio and a map, got me killed so many times that I often considered leaving them all to die and just spending the 60 seconds grabbing whatever it is that I’ll need to survive, since if they can’t be bothered to save themselves or work as a family in a time of need, then why should I bother with saving them? Sadly though, video game or not, I have a conscious and every time I did successfully make it into the bunker in the nick of time, I did so with my family safely inside and the lesser supplies I was able to grab.

So with everyone in, the second stage of 60 Seconds! can begin, surviving. Until your family is rescued, the bunker is to become your home and you are to live in it for as long as you can. In order to do this, food and water need to be rationed, and crucial decisions are to be made. What you have, won’t sustain you forever, so when your family members are feeling great, or at least well fed, they can be sent out on an expedition to look for supplies or a rescue. Sometimes they will come back with what you need, sometimes they’ll come back with nothing and be injured/sick, requiring extra attention just to get them well again, but other times, they won’t come back at all.

As a survival game, your family members can die and not just outside the bunker, but in it as well. If they perish from sickness, starvation or dehydration, then that’s it! They’re gone and you must put up with the sight of their corpse until you all perish, or those of you who are left can make it to safety, via the military or twin siblings. But just because the rescue party can knock on your cellar door, so can others. There are creatures, bandits and plenty of other threats to make the apocalypse exciting and all the way through it, you will constantly be forced to make choices. “Do you open the briefcase that has been left outside your cellar? Do you fire your gun at the risk of having it break on you? Do you use the axe to seal Mary Jane’s wound, at the risk of losing the axe for good?”

There is no simple answer to them and ignoring them won’t help you out either, as failing to act, could very well be the thing that kills you all, but what I hated about this aspect of the game, was how limited it all is. Events that occur are told to you via a journal that can be accessed every new day, all decisions are made whilst reading through the journal and once the hard part is over, the next day begins and you must go through it all over again, so when a family member of yours is out there in the chaotic world, you have no idea what’s going on. All you have is a picture of the characters you have in the cellar and the supplies you grabbed, placed around them in the background.

You don’t get to see the outside world and you don’t even get to move, which I found to be a little boring. I know the game is about a family trapped in a cellar, but a little bit of movement, even inside the room would have gone a long way to making me feel better about 60 Seconds! Instead of sitting around doing nothing, because that’s not surviving. Fortunately though, for those of you who have no interest in doing the whole surviving thing, there is a game mode you can do that does without it. With the Scavenge mode, all you need to do is spend the 60 seconds gathering supplies and your family and getting it all to the shelter before time is up and that’s it. I’ll admit, it’s not the most enjoyable singular mode in a game, in the world, but it’s something. If you’d rather go the other way with it though, there is a Survival mode where you skip the scavenging aspect of the game and are instead forced to survive on randomly assigned supplies for every playthrough.

Personally, I prefer Survival, as I despise the scavenging, purely because of the whole family being useless thing, but also because the 60 seconds just aren’t enough time for me and I keep getting trapped behind furniture and are unable to grab things the first time I reach out for them. But should you wish to have a bit more content for what you play, there is also a Challenge mode. With Challenge mode, there are different options available, which when selected, require you to collect very specific items and family members before retreating into your shelter. Completing the challenges can earn you fun hats to wear, but they are called challenges for a reason as they are not easy to complete at all and don’t really do all that much to extend the game’s appeal and replay value, in my eyes anyway. In the case you’re not quite put off though, there is an unlockable character and many different endings. Not all of them are good, but they are all worth experiencing at least ones, especially the funny driven away ones, as you family can lose their shelter to others, including those who are supposed to save you, i.e. the military.

Although the writing and certain dark events that can happen in 60 Seconds!, can be rather humorous and supported touch-screen controls can make certain gameplay aspects feel smoother, I think even for the true fans of survival games, might have a tough time 60 Seconds!. It’s not its hard or an unappealing game, but it is so easy to lose interest in it, that sometimes you can find yourself quitting and restarting, as opposed to seeing your attempt at survival, all the way through to the end. It’s also a game, I do think you need to be in a certain mind-set to play and for me, that particular mind-set escaped me completely. I just wish though that 60 Seconds! was more of a video game then a comic book, as it was one thing to make it look like one, which was fine, but when you easily spend almost three times as much time reading something then you do actually playing, there does come a time when you should ask yourself would you be better off actually reading a book or magazine? I’m being harsh I know, but at the end of the day, a review is an opinion and this is mine, but if you feel 60 Seconds! could be a great addition to your Switch library, then good for you, because if you do get it and enjoy it, you’re a better and less critical gamer than me!