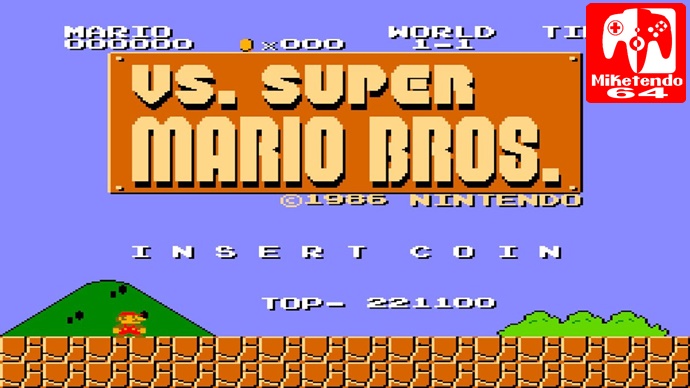 If you didn’t think the original Super Mario Bros was hard enough, well somebody heard you because VS. Super Mario Bros is a remix arcade version of the NES game you know and love with some very distinct changes with levels that came from Mario: The Lost Levels. You better have some nickels ready, cos you’re gonna need them.

VS Super Mario Bros. was released on the VS System. These were coin operated arcade machines that sprouted up during the 80’s and sometimes included seats or had you stand up to play. They were designed for competitive play and usually had two screens with joint controls and were mostly NES ported games like Wrecking Crew, Golf, Pinball and of course Super Mario Bros.

VS Super Mario Bros. plays just like the NES counterpart with a number of differences but the story is the same. As Mario or Luigi (2nd player only), you must rescue Princess Toadstool who has been captured by the evil King Koopa. You must collect coins and stomp Goombas as you make your way to the flagpole at the end of each level. Mushrooms help you grow and fire flowers give you the power to throw fire balls. Every power-up helps as a single touch of an enemy is enough to shrink you and kill you.
It isn’t just enemies you have to worry about though, environmental hazards are just as lethal as pit falls, lava pools and fire bars are just waiting for you to misjudge your jump and claim a life from you. If that wasn’t enough you have a countdown timer that should it run out before you reach the goal post, you will also lose a life.

Running on the same aesthetic as the NES version, VS. Super Mario Bros. uses 8-bit graphics and chiptunes. It looks and feels just like the original with all the sprites and sound effects, you would almost believe it to be the same game. Though there are a number of different levels that were never in the NES version and they can be an absolute nightmare to play. Fortunately, if you lose all your lives you can ‘Insert a coin’ and replay from the first level in the last World you lost all of your lives in.
The original screen ratio is 4:3 but thanks to the in-game display options, you can actually adjust the screen ratio and stretch the pixels to fill the full width of the screen. I don’t really like having plain black bars either side of my screen and at least with this option, I can play VS. Super Mario Bros. in full 16:9 beauty.

It isn’t just the screen you can adjust but a number of other options too, like how quick you want the timer to countdown. How many lives you can start with, the maximum being three. How many coins you have to collect before you can get an extra life with a minimum of 100. These weren’t just added for the sake of the Nintendo Switch. These were features that actually existed in the VS Arcade machines which operators could adjust in order to make the game as difficult as they like.

Much like VS Mario Bros., which we have reviewed before, VS. Super Mario Bros. also has three modes of play. The original mode. Hi Score mode in which your score will be recorded and shared online and then there is caravan mode which also shares your score online but you only have a 5 minute time limit in order to get as high a score as possible. The is no save option in Hi Score mode or Caravan mode but you do get a One time save option in original mode. This is handy for saving your game when you want to come back to it at a later date and won’t be affected if you close the software to play a different game. Unfortunately, you can not reuse this save point after loading from it and you will have to create a new save point the next time you want to quit the game.

The controls, much like the original game it is based on is very simple with the Joy-stick and/or directional buttons to move and two buttons for commands one for jumping and the other for dashing and throwing fire balls. You can also map the commands to other buttons to make it more comfortable to your style of gameplay. You can also map the Start button and Insert Coin button as well. There is one major problem with with the controls and that they are not as responsive as they could be and are too much like the original game. If the game was not hard enough with its crazy long jumps or influx of enemies on later levels. The player is also bogged down with a control scheme that can hinder them just as much as help them progress. If you don’t have enough speed, you can’t make the long jump. Sometimes your jump will fall short for no reason and even worse, you may even fail to jump entirely. This is nothing new though, this has been an existing fault in the games since it was first released on the NES.

It is incredible how Mario games have evolved over the years and how much of a challenge they used to be as opposed to how they have involved to become much more of an approachable platformer that anyone with half an idea can pick up and play. Still, With Nintendo yet to bring any of their original titles to the Nintendo Switch via Virtual Console. It is still nice that HAMSTER have stepped up to provide one of the most iconic games of all time that have inspired and moulded video games into what they are today. Even if you can’t beat through every level without having to keep adding continues, you can still test your skills against another player to see who is the better Mario Player as you can use two Joy-Cons to play 2-player.

Well, what can I say? Other than it is Super Mario, yet again, it isn’t a title that offers much more to the Switch table that we haven’t already got already. That may seem harsh but it is worth noting that this title is around $6.99 to download on the Nintendo Switch eShop which is more than twice as much as the NES version on the Wii U or 3DS eShop. You can also play it on the NES Mini Classic if you are fortunate to have one or even via emulator on PC. Either of these versions also offer the option to save your game and reload from the restore point. I’m not saying that VS. Super Mario Bros is not worth the money, but when it is available for a much cheaper price on many other Nintendo platforms, you are better of buying another game for the Switch and continue to play Super Mario Bros on whatever platform you already have it on.