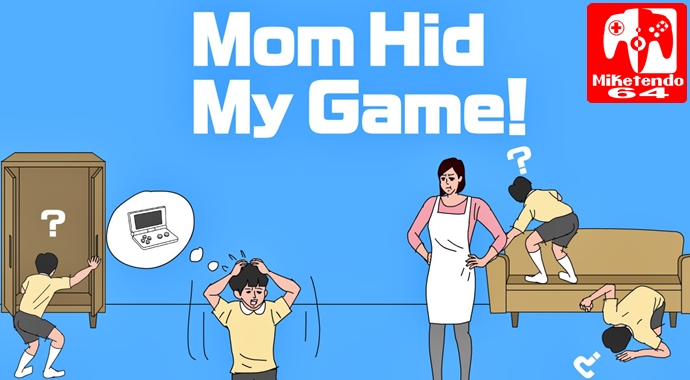 I hope you’re ready for a spanking! Mom knows how much time you’ve put into playing games this year and she is not happy!

Previously designed for mobile devices and released in 2016, hap Inc’s Hidden my Game by Mom, is moving up in the world as its makes its name to another Nintendo platform, after already coming to the New Nintendo 3DS earlier this year. Currently supporting the shorter name of Mom Hid My Game!, it’s still very much so the game we originally saw, except unlike last year, there are now 50 levels as opposed to 30 and they’re even crazy than ever.

For an escape-room game that goes for a very minimalist look, with a vibrant blue background that has a story concerning a young male protagonist who plays video games so much on his 3DS like device that his mom soon confiscates it, things go from normal, to downright insane in a matter of levels I mean, who’d have thought that a simple game of “find where mom put my 3DS” would lead to you getting abducted by aliens, all because you didn’t use a goat as a sacrifice first. (I’m not kidding, this is actually something you have to do in game.)

What’s worse though, is that’s not the worst of it. You would think aliens are out there, but with the boy getting his 3DS taken away from him every single day, as each level is a day, in his efforts to reclaim it, the things he is willing to do is simply bizarre. From feeding an elephant, just to make it crap out a 3DS, to coming face to face with a bomb and entering a series of button commands, just to shoot a fireball at grandad, Mom Hid My Game, asks a lot of its young hero and although he is up to the task, the question we must ask ourselves is “are we?”

Puzzle games are great, with some point and click games being just too good to pass up, but when playing Mom Hid My Game, it’s not just bizarre comedic scenarios players have to put up with and the graphics that look a lot like the pictures you’ll see on a health and safety brochure, but then there’s the music. With a singular track that plays throughout the entire game that is both infuriating and catchy, this maddening tune will stay with you, long after you’ve shut the game down, turned your Switch off and go on to get on with the rest of your day. The funny thing is though, while Mom Hid My Game, does come across as being very unappealing and unpractical, that’s how it gets you. It doesn’t need you to like it to make you play it, it just needs you to have a free couple of minutes because once you invest a little bit of time into it, there is every chance you will spend the next 20 minutes playing it.

Anyhow, since I have actually yet to even write about how it plays, let’s correct that. For the players wishing to do everything via touch, touch-screen controls are fully supported and are not a bad way to play, but if you’d rather use either analog stick or the A, B, Y, X and the Directional Buttons, you can! I wouldn’t say they’re the best way to play, as touch is much quicker and swifter, but after spending half my day typing on a keyboard, I’d much rather twiddle a stick or two and occasionally mash a button as opposed to punishing my fingertips even more so.

As for how the controls carry over to the main gameplay, as a puzzle game that sees you hunting down your missing 3DS, you need to interact with any and everything you see to uncover where your 3DS is and get to it. Some of the items you can interact with, are simply there to make you fail, whereas others are there to bring some comedy into the mix, when you realise the role in which they’ll play in getting you the thing that you desire the most. You will have to be careful though, because if your mom catches you, it’s also game over, because she’s not quite ready to see your punishment lifted just yet, so don’t touch her, don’t interact with her and when she’s hiding behind a plant, spying on you, then for the love of God just ignore her, but don’t go thinking she’s the threat you face!

From snakes that love to hid in pots, a chicken that wants its egg back and even cyclists you cycle inside a living room and have no qualms with running over a young boy, our unnamed hero must face a lot of threats. But if you get stuck one too many times and can’t seem to work out what it is you have to do to solve the current level, there are hints available. You will have to find and match 2 Hint Cards in order to get the hint or hints, as some levels have 2 and require you to match 2 sets, but while some will flat-out tell you what you need to do, others can be so cryptic, even a code breaker would have some difficulty. But if you stick to it, think outside the box and make sure to use everything you have in your inventory, you will get 3DS back, every single time and well within an hour and a half as that is more than enough time to play Mom Hid My Game! from start to finish and on that not, it’s time to finish this.

From its infectious tune, simple gameplay and bizarre outcomes, Mom Hid My Game is one of those games where you need no reason to play it. You don’t need to like it, or even be willing to play it, because it will suck you in all the same and do its best to challenge you and make you laugh. Whether it succeeds or fails, depends entirely on you, but unless Mom Hid My Game! is the “something” you’ve been waiting for to own on your Switch, you’re honestly better off waiting for something better to come along, or just settling for something that’s released already, such as Octodad: Dadliest Catch! It may not be that much of a step up, but when compared against Mom Hid My Game!, there are many top quality indie games that are worth your time, money and focus instead.