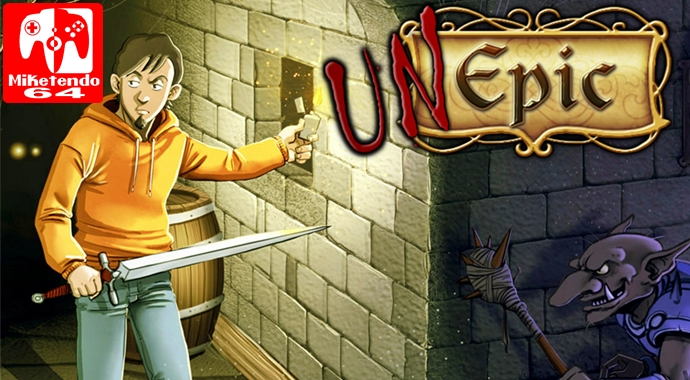 Hack, slash and grind your way through a creepy castle as a highly unlikable twerp who tries to use his novice RPG knowledge to find and kill Harnakon, the master of the castle. You won’t love what you play, but some of Unepic’s ideas are at least somewhat smart.

Unepic is not a particularly enjoyable game. There’s a love for the RPG and classic Metroidvania here, mixed with a love for the deeper role-playing games such as Dungeons and Dragons (D&D), but it all moves at a snail’s pace with a love for unfunny, overlong text and poor voice-acting. The game opens with a classic scene of several uninspired, tired nerd clichés gathered around a table, playing a game of D&D, ripping into each other, as is to be expected. One of them, Daniel, gets up to go for a pee after being laughed at for his poor knowledge of “real” RPGs and not just the ones you play on a games console. Much to his bemusement, he finds himself in a dark, creepy (and altogether terrifically bland) castle, becoming possessed by an evil spirit of some kind that he later goes on to call Zera. You learn that Harnakon is the master of the castle, and that it is your destiny to defeat him in order to return home. Daniel isn’t hallucinating, all of this is very real indeed.

What follows is dull, lifeless and largely un-enjoyable. There are intentions behind the game to make for something deeper than the likes of Castlevania, where physical weapons won’t hurt ghosts, the correct ingredients are required for everything and a deep level system that allows you to craft an adventure that suits your preferred play-style, but it is all hidden behind an ugly snore fest of a game. Right off the bat, you will notice that Daniel moves slowly and has a tremendously awful jumping ability that at once feels both too rigid and too floaty. Combat is simple, with you essentially facing enemies and holding the “X” button to attack them with your equipped weapon (the usual swords, lances, axes, maces, bow and arrows and daggers all make appearances here alongside magical wands). There’s not much fun to be had, especially in the game’s later moments where the enemies suddenly decide to get a lot stronger.

Indeed, you’ll likely coast through the opening eight or so hours of the game, only really becoming frustrated by the laboriously back-and-forth nature of the castle’s design when tackling all of its quests and its preposterous saving mechanic (there is just one room in the entire castle to save your progress). When you enter the latter stages of the castle, you’ll find rooms where you have to beat every enemy in order to progress, with enemies surrounding themselves in shields that are a right pain to get past, fireballs that move far quicker than anything Daniel can do which deal huge damage that remains on your person for ages. Unepic isn’t an easy ride, and it does offer plenty of playtime, but this is time that you won’t get back and would be better off spending on other things.

There are plenty of moments where Unepic feels as though it is being smart: you’ll have to delete leeches and vampire bats out of your inventory which is at first clever and then hugely tiresome. Invisible enemies will steal your weapons, only being defeated if you can cast light magic. Bosses will fill the screen and attack in easy to spot patterns that you can find the right magic to best easily, but you’ll end up spamming bow and arrow attacks instead. The writing, which references just about every cult favourite TV show and video game thinks it is smart, too, but oh boy, is it anything but. Sure, you might snigger once or twice (such as when Daniel’s mother somehow manages to phone him), but Unepic is just plain annoying. The biggest offender here is Daniel.

Daniel is your run of the mill nerd without any ambition, someone who just sits around playing video games all day, getting high and probably partial to a bit of the old Mountain Dew and Doritos. Each one of his lines is a quip of some sort, he thinks he is great and a right old know-it-all. He is insufferably annoying and tremendously unlikable. You’ll side with Zera who, in most of the game’s overlong and uninteresting discussions, wants to kill Daniel. I didn’t care about taking Daniel through to the end of his quest, I didn’t want to spend any time with him let alone the thirteen or so hours I did spend with him. It’s fair to say, too, that the developer didn’t like Daniel much, either. The game contains three endings, and I have it on good authority that each one is a letdown with no real quality conclusion.

At least some of the game is enjoyable. Despite the simple graphics, gameplay and presentation fighting through the castle isn’t terrible. There is not much excitement, but the variety of enemies, weapons and detailed levelling up systems are fun. The inventory screens are intuitive and not too cluttered, a Godsend in a game such as this, which relies on you keeping track of all the items, weapons and ingredients you own. I appreciated all the shortcuts in the game, too, which did speed up proceedings just enough to keep me sane with all the backtracking asked of me. What I didn’t appreciate, however, was the complete and utter lack of signposts on the map screen. There are plenty of times throughout Unepic where you will be tasked with finding particular sections of the map, but it is never said where anything is.

It gets worse. When you beat a boss, you are given a key to get to the next area of the castle. The keys are all coloured differently, but they don’t match up with what looks like basic pathway indicators on the map. The map doesn’t remind you where you are meant to go in order to progress the game’s story and on more than one occasion I was left scratching my head and running around in circles looking for the right keyholes for the right keys. I understand that Unepic is channelling classic platforming RPGs, but times have changed. The map here is more obtuse than any I’ve ever come across. Unepic isn’t entertaining and, despite flashes of it, isn’t very smart. You’ll be far better off playing or watching any of the cult games, TV shows or films mentioned in the game, at least those are fun.

Unepic has flashes of smarts, but it all grows rather tiresome, far too quickly. It looks dull and it plays dull too. The obtuse map isn’t helped by ludicrous amounts of back-and-forth, there’s no excitement of discovery, nor blast of retro charm. The gameplay, while dull is passable enough (although the jumping mechanics are poor), with a smart levelling up system backed up by good inventory screens. The biggest issue with Unepic, however, comes in its writing, characters and delivery. Daniel has to be one of the most unlikable characters I have ever come across in any form of media, ever.