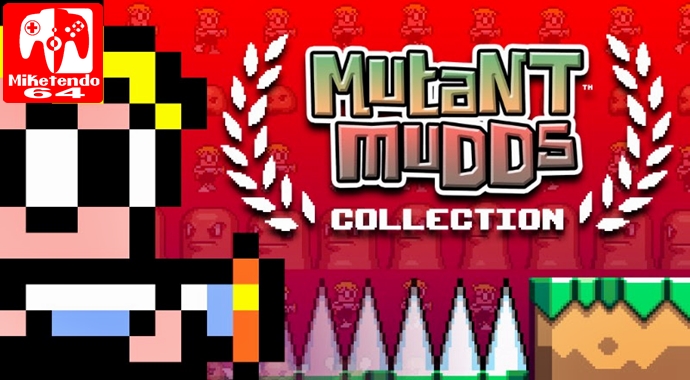 Ever hear of a video games developer by the name of Atooi? What about Jools Watsham? Who am I kidding? Who hasn’t heard of Atooi and Jools? Atooi is the company Jools founded after Renegade Kid (also founded by Jools.) Jools was also one of the developers who worked Mutant Mudds and brought it to the Nintendo 3DS in 2012 and since them, things have never been the same again for Jools, as his first foothold on the indie scene was simply the beginning! In the very short years that have followed, Mutant Mudds became a game loved by many, even more so when a Deluxe version was first brought to the Wii U and Microsoft Windows in 2013 with a spin-off entitled Mutant Mudds Super Challenge, released on various platforms in 2016.

So because of all the love and high praise, it’s only natural that the Mudds games would be able to join in on the fun and have a Switch release to call their own, except Atooi had other plans and what they did, was the perfectly way of going about things. Instead of just porting the two games separately, the two games are being ported as part of a collection that doesn’t just consist of them, but also consists of the entirely new Mudd Blocks game, which like Super Challenge, is another Mudds focused spin-off and is a whole other kettle of fish.

Now because the game itself (Mutant Mudds Collection,) is a collection, that’s exactly how we will be reviewing it, but we will take the time to talk about each game this collection has to offer, especially Mudd Blocks, as it is a new creation. So unless you want to learn about two games you’ve most likely played before, you can of course fast forward to the part of the review where I talk about Blocks, but if you’re here to read, then consider the following paragraphs about the old games both for you:

Being the Deluxe version of where it all began, Mutant Mudds Deluxe is a platformer that starts as an as easy 2, but quickly becomes a challenging 10, due to the exceedingly high difficulty bar that players can experience, when they get to the much later levels. But because that is a “later” thing, let’s start with the beginning. Mutant Mudds Deluxe, is the story of Max. Max is a young lad who one day was playing a video game, when a meteor fell and the invasion of the Mudds had begun. Equipped with nothing more than a water gun, a jetpack and an attitude to take on the Mutant Mudds, Max sets out on his quest to save his planet and locate the legendary Water Sprites, which when all are collected, will get rid of the Mutant Mudds for good.

Gameplay wise, the levels aren’t exceedingly long as most can be accomplished well within 5 minutes if you know what you’re doing, but the levels have a pleasing design, enemies to defeat and two ways to complete it. Sure you can stay the course, collect the 100 Golden Diamonds that can be found on every level, pass the checkpoint and get the Water Sprite at the end of the level, but where’s the fun in that? In addition to the easier level to complete, there is a harder version secreted away and should you find it and enter the likes of G-Land, true horrors can be found. There’s more enemies, more threats and more death traps, but surviving it will not only demonstrate your prowess as a platformer pro, but they’ll get you another Water Sprite too if you make it to the end.

If you don’t make it to the end, as you only get three hearts and dying is something that can happen a lot, the good news is you have infinite lives and if you’ve reached a checkpoint, upon dying, it is at the checkpoint you will respawn and if you haven’t reached one, it’s back to the beginning of the level you go. I was a little put off by Mutant Mudds at first as I kept trying to rush through it, only to get frustrated and die, but when I took the time to plan out what to do, when I should do it and execute it, things went smoother. I learned to time my jumps better, I hovered when I needed to and when my gun, and gear failed me, but I had collected enough Golden Diamonds, I made the trip to Granny’s Attic and brought the necessary upgrades.

Getting every Water Sprite will not be easy, as the 80 available levels do know how to turn on the heat, as stated before, but just because the action places out in 2D fashion with 16-bit graphics, but there is a touch of 3D in Mutant Mudds Deluxe, as Max can jet off to the terrain in the background, or get closer to the screen then your nose can, whenever he finds himself leaping towards us and exploring a terrain we didn’t know was there. In truth, this feature worked best on the 3DS due to its 3D display that was able to capture the action perfectly and the Switch just can’t do it justice, but it’s not game breaking or too much of a problem if you never played it on the 3DS in the first place. So to sum up, Mutant Mudds Deluxe is hard, it’s awesome and the chiptune track I didn’t mention before, is pretty good too.

Instead of being a full-fledged sequel, like some had hoped it would be, Mutant Mudds Super Challenge is something of a buffer piece. A Mudds game to fill the void until such a time comes and a Mutant Mudds 2 shows its muddy head. Still, just because it only consists of 40+ levels with less Water Sprites to collect, it does not mean Super Challenge is not worth checking out.

Like the game it is a spin-off from, Mutant Mudds Super Challenge, shares a great number of qualities. It is also a platformer, the three hearts system is back, so are upgrades, only now you can swap them out and it’s the same back and forth action we had before, only now there is so much more to the package that is Super Challenge as Boss Battles are introduced in addition to a number of other elements. Elements such as there are now 20 unlockable characters, who can all be played as, with one being Rusty from SteamWorld Dig, but there’s other collectibles too like soundtracks.

The biggest takeaway from Super Challenge though, is the fact that it makes Mutant Mudds look like a walk in the park. It is not just difficult, it is utterly hellish, so unless you are an avid platformer fan who’s played the exceptionally difficult levels players created for Super Mario Maker back when everyone couldn’t get enough of it when it released on the Wii U. You won’t just die, you’ll die a lot, but like with Mudds, there’s infinite lives, so you can keep on trying, but there is a death counter and it is all too happy to rack up your death count! (What fun!)

Should Mutant Mudds Super Challenge be a little too challenging for you, there is an alterative! Completing the Mudds trifecta is of course the entirely new Mudd Blocks. Max’s war against the Mudds is never over and neither should yours, so even if you can’t platform your way to victory, maybe block play is the way to go. From being able to throw various coloured Mudd blocks and using them against the Mudds, or just throwing Water Bombs, the Mudds won’t know what hit them, but should they pass the bar Max finds himself standing upon, it’s game over and your efforts will be gauged!

As a puzzle game, Mudd Blocks is all about trying to get the highest score you possible can whilst meeting the requirements of other modes. (In Numbers, the goal is to clear the Mudd Blocks in their correct order of 1, 2 and then 3.) Talking of other modes, there is Endless, which is Max’s endless war against Mudds in a bid to rack up points, until he dies. There’s co-op play where you and a friend can play together, co-op versus where you do battle against one another, but here’s a fun fact for you! In Mudd Blocks, when playing one of the co-op modes, if in Handheld mode and the two Joy-Con Controllers are connected to the screen, each Joy-Con will control each character on a screen, so even if you don’t have anyone to play with, you can actually play against yourself. (Care to pit your left and right hands against each other? It can be fun!)

Other modes for Mudd Blocks, is Numbers, which I have previously covered, but there’s also Rescue. With rescue, you need to break helpless civilians out of cages and free them from the clutches of the Mutant Mudds, but it’s not a case of one and done as several attempts and bombs just to free them. Although the only thing harder than Rescue, is knowing what to do in the first place. With no real clear instructions for each game, the goal on each one isn’t as clear as it could have been, so every mode does take a bit of getting used to. As for something else that takes some getting used to, is the fact TATE mode (vertical) is supported, so if you want to set, prop or just have someone hold your Switch in a vertical position, so you can play it that way, you can. Mudd Blocks is by no means better than Chicken Wiggle, which sadly was not as appreciated as it could have been, but it is part of a rather special package that does deserve to be owned, played and enjoyed by all those willing to give it a go!

If you are after true value for your money, then you’re really not going to do much better then Mutant Mudds Collection. Even without the discount that has it available for $9.99, it is still three of the better games you could play on your Switch this year. Sure two of them are “old hat” as they are something many of us have tried out before, but old or not, Mutant Mudds Deluxe and Mutant Mudds Super Challenge were both great games when they released and they’re still great now. Granted Mudd Blocks might not be as strong as a contender as the others, but it offers a similar degree of challenge the others can throw at you and it on its own is worth the asking price, so the fact you can get two other of Atooi’s games thrown in, is just the cherry on top of the icing and there’s no one around to say you can’t eat have your cake and eat it too!  Plus there’s leaderboards and Video Capture, so if you feel the Mutant Mudds Collection doesn’t possess enough challenge, there is when you see a player do a something you couldn’t and the campaign to better them can begin!