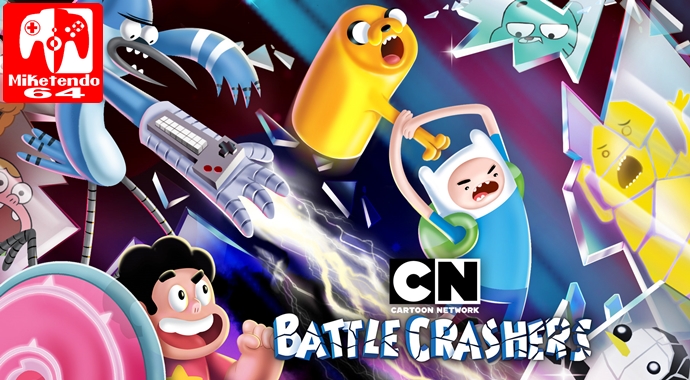 It’s no secret that licensed games are horrible 9 times out of 10. From E.T. on the Atari 2600 to Frozen: Olaf’s Quest for Nintendo DS, these titles are almost always poorly put together cash-ins designed to trick parents into buying their kids a subpar game with a familiar character on the box. But legend has it that on rare occasions, these TV and movie tie-ins aspire to be more than mere shovelware. Sometimes, a publisher actually cares about quality. Sometimes, a developer is given the time and budget to create a respectable product. And sometimes, they even turn out to be some of the best games of all time.

But enough about Shrek 2 for Gamecube. Cartoon Network: Battle Crashers is one of the worst beat-’em-ups I’ve ever played.

When I first started up the game, I thought something was wrong with my controller. I tried to press a button but nothing happened, and I couldn’t even back out to the Home menu without using the Joy-Con. As I reached for the USB cord to charge my presumably dead controller battery, suddenly it hit me: the game lacks Pro Controller support. I don’t know how that’s still a thing, but what I do know is that CN: Battle Crashers is already on my bad side since I rarely ever use the Joy-Con outside of handheld mode. But as I’m sure most kids getting this won’t have shelled out $70 for a Pro Controller anyway, I won’t knock it too badly for that. Trust me, there are plenty of other things it needs to answer for first.

Once you’ve sorted out any controller woes, a cutscene lays out the story. Uncle Grandpa is driving his inter-dimensional RV, falls asleep at the wheel, and accidentally merges the cartoon dimensions of Regular Show, Adventure Time, Clarence, Gumball, and Steven Universe with his own. Not a great story, but par for the course when it comes to cartoon crossovers. You start out playing as Clarence in his hometown of Aberdale and acquire more Cartoon Network characters as you go along, but it takes just a few seconds to discover the first fatal flaw: you have exactly one attack. That’s right, you’re playing a beat-‘em-up in 2017 where you have one attack. Sure, you can collect gems to level up your character and acquire extra abilities, but they’re not guaranteed to be useful. For example, Finn & Jake from Adventure Time starts with a strong hammer attack that kills most enemies in a few hits. When leveled up, they gain a special move that lets Jake pound enemies into dust, as well as a stretchy arm attack and the ability to use Jake as a boomerang. Seems like a decent amount of variety, right? Meanwhile, Steven Universe can blow a bubble as his basic attack, shoot a weak laser as his special, and shield himself from damage as his third ability, essentially leaving him with that one bubble attack as his main means of dealing damage.

Because of this disparity, you’ll quickly ignore every character but the Adventure Time duo and Rigby & Mordecai from Regular Show since their basic attacks are by far the most powerful (Rigby & Mordecai literally require nothing more than holding the Y button as their stream of electricity kills everything in the vicinity). Other characters have special traits such as Gumball being able to blow away stink lines that deal continuous damage, and Steven’s bubbling move being able to shield teammates in co-op, but the game is so easy that preventing damage barely matters. Each character has their own health bar, and since you can switch between them at will, you need to somehow let all 6 characters die to the extremely weak enemies to get a game over.   As for the actual gameplay, you walk from left to right in a series of uninspired environments, whacking away at enemies from the various shows until the level simply ends. That’s literally it. There’s no climactic conclusion, no epic finale, every stage just stops after an excruciatingly long time. Sometimes there will be an added gimmick to the level, such as a noise meter in Gumball’s library that will freeze you if you attack too often, but these barely make a difference. There are even boss battles that attempt to shake things up, but they again simply require you to whack away at an enemy with a larger-than-usual health bar while you soak up negligible damage, no thought required.

Compounding this tedium is the nonsensical need for special items to progress. For example, at the end of the second Gumball level, Gumball’s dad will tell you that you’ll need a VR helmet to reach the next area. This means you need to replay an earlier Clarence level in its entirety to find Flame Princess, who will tell you she saw a VR helmet in Gumball’s school. Then you replay the first Gumball level to enter a room at the end of the stage that wasn’t there before and retrieve the helmet, complete the second Gumball level AGAIN, and THEN be able to progress. The game makes you engage in these painful backtracking sequences no less than six times in an attempt to pad out an extremely shallow experience. Lastly, there are additional “Bonkers” difficulty modes to select that supposedly provide further gameplay modifiers, but they appear to be locked until you complete the game and I simply could not be bothered to subject myself to such torture to find out.

Being a game based on cartoon licenses, you’d think there would at least be some entertaining animation and voice work to appreciate, but alas. Every character moves with the same unappealing tweened animations, and there is no voiced speech whatsoever. Even what little text dialogue there is sounds generic and rarely feels like something the actual characters would have said. Despite being a crossover there isn’t even much fanservice, as the closest you get is the super move animations when a rare radio item is grabbed. A shockingly short cutscene plays based on which character you’re using, and they’re so brief that you might not even notice the cameos initially. The only saving grace is the backgrounds, which are sparse but at least look like they were ripped straight from each show’s unique art style.

I can’t stress enough how utterly boring this game is. Even young children are sure to quickly grow tired of the uninspired gameplay and sheer lack of variety that Cartoon Network: Battle Crashers offers. If you absolutely must see your favorite CN characters in a video game, consider purchasing another title like Steven Universe: Save the Light or Adventure Time: Finn and Jake Investigations instead of this dreck.